‘Jeopardy!’ Contestant From Boston Tells Worst and Longest Story Ever 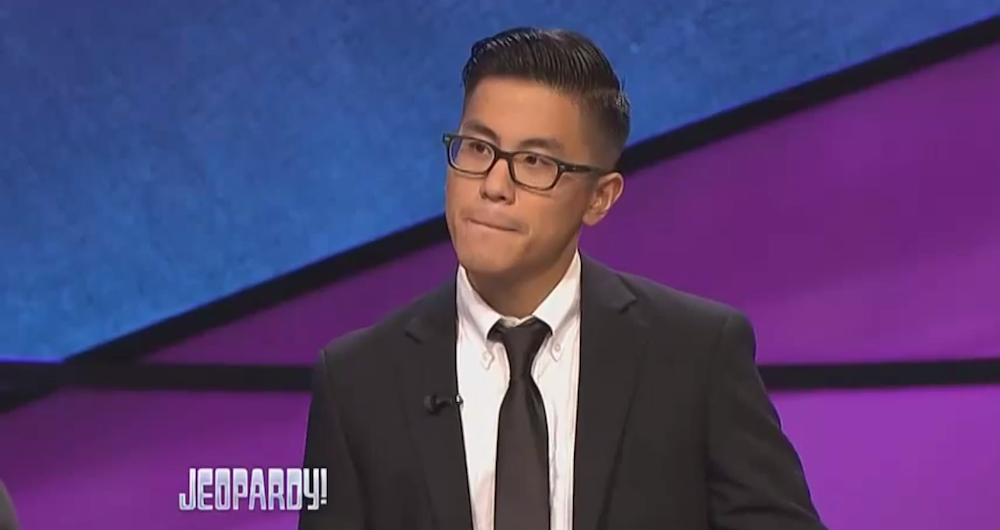 “Jeopardy!” has been on air for longer than I’ve been alive for one reason and one reason only: the game.

Alex Trebek, especially with the mustache gone once again, is more of a distraction than anything, and the worst part of the show comes when he decides to interview each contestant after the first commercial break. Often, the competitors keep it short and sweet, telling about a first date with a spouse, or a tepid anecdote about traveling abroad in college.

Dan Tran, last night’s contestant from Boston, while sporting a really sharp haircut and suit to match, really missed the mark with his story. Perhaps nerves got the best of him, but even Trebek, whose job it is to look impressed after these dull tales, had no clue how to react to Tran’s unguided rambling:

“So when I was a senior in high school—I took French in high school—we went on an exchange trip and we arrived incredibly jet-lagged, no cappuccino could really save us in that regard. And uh, during an open air tour bus tour in Paris, I looked up and said to my friend ‘hey, you know, the moon looks pretty bright tonight/today’ and um, they just turned to me like ‘Dan, that’s not the moon, that’s the sun.’

‘And I was like, no guys it’s the sun.’ But um, but then you know it turned out it was actually the sun and not the moon and I still confuse it nowadays.”

There’s no question that Dan is a smart guy. He’s a physics student (although I assume he’s not an aspiring astrophysicist) and after all was said and done, he ended up being co-champion for the day and will return this evening. It wasn’t until after his long-winded incoherence cost us all four questions from the Jeopardy! round though. Let’s hope tonight he’ll come in with a gripping narrative about that time he thought he could swallow his fist but his fist was really an orange.

Enter to win a pair of tickets to attend The Hess Collection Seminar and Dinner as part of Boston Wine Festival 2018 at the Boston Harbor Hotel on Wednesday, March 14th. END_OF_DOCUMENT_TOKEN_TO_BE_REPLACED

A decade of Wreck The Halls. END_OF_DOCUMENT_TOKEN_TO_BE_REPLACED

Leah Wellbaum from Slothrust brought her trusty six-string to Studio B and turned in the first RadioBDC Session of 2017. Check out her three songs and her chat with Julie Kramer, recorded live on February 28, 2017. END_OF_DOCUMENT_TOKEN_TO_BE_REPLACED

This should never have happened. END_OF_DOCUMENT_TOKEN_TO_BE_REPLACED

I spend far too much time on Twitter. Here’s a handful of posts from last year that I found to be entertaining on one level or another. Enjoy. END_OF_DOCUMENT_TOKEN_TO_BE_REPLACED