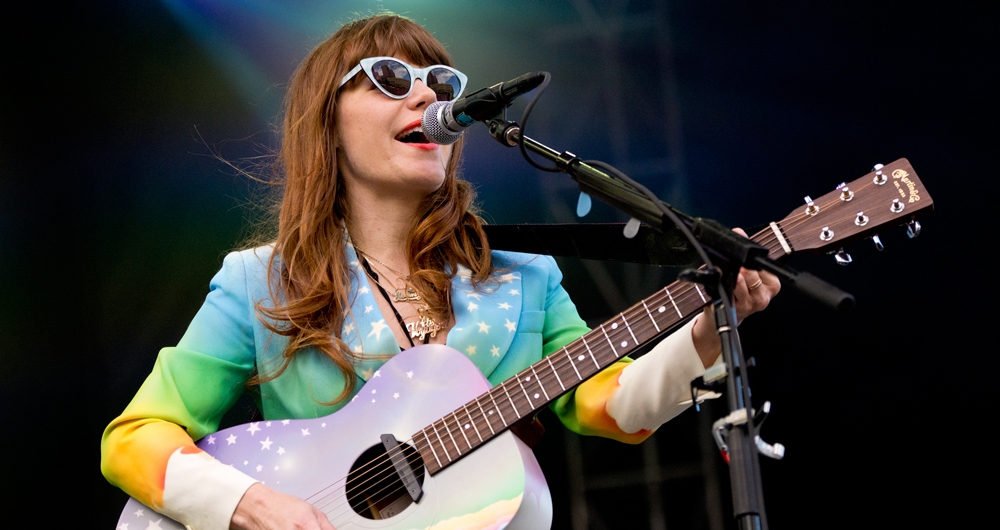 It’s a week of big names and big sounds. A cult-favorite Californian returns with a new solo album produced with the help of Beck and Ryan Adams, a Boston-bred indie pop group continues to evolve, and two producers deliver two very different efforts, all combining for a diverse crop of music to close out July. Take a read and let us know what you think.

It’s been six years since Jenny Lewis put out a solo album, and four years since legions of fans were devastated by the split of the Los Angeles indie-folk band Rilo Kiley, however, the 38-year old Californian comes at us hard on this release, “The Voyager.”  In fact it could be her strongest work to date. “The Voyager” is an album that’s meant to be heard outdoors in a small setting with lyrics that demand memorization. Lewis knocks the dust off Tom Petty-esque guitar riffs with help from seasoned producers, Ryan Adams and Beck, on her title track “Just One of the Guys.” Lewis’ sugary delivery of even the most heartbreaking lines elicit visions of sunbeams and sparkles. The feel of “The Voyager” is charmingly vintage and refreshingly easy going- a helpful dose of sugar to accompany Lewis’ thought-provoking writing.


Sounds like: Guitar reminiscent of uppity ’90s pop-rock with lyrics and soul that feel like they came right out of a Bonnie Raitt album.


– Alex Khatchadourian
Diplo’s “Random White Dude Be Everywhere” LP has a great title (the name was taken from a comment on the 35-year-old producer’s Youtube page). As for the project itself, it has the sort of cogency one might expect from an album named after a Youtube comment. The record is the would-be “greatest hits” collection, compiled by an artist that hasn’t had all too many hits. Diplo’s 2012 trap anthem “Express Yourself” has rightfully found its place in American folklore—right alongside Paul Bunyan, Johnny Appleseed, and the like—but Diplo, the artist? He hasn’t planted nearly enough apple trees yet. “Random White Dude Be Everything” does feature a couple of original tracks, but it’s mostly an island of misfit singles, stitched together from Diplo’s many EP’s—and then questionably remixed to flesh the whole project out a bit. Diplo has a good ear for bringing sounds together, but as far as its concept goes, “Random White Dude” is all over the place.


Sounds Like: The sort of party playlist you might put together if you don’t sufficiently care for your guests.


-John Wiley
“Lese Majesty” is the second great album to come from Sub Pop’s burgeoning rap catalog this year. The sophomore effort by Shabazz Palaces – comprised of Tendai Maraire and and Digable Planets’ Ishmael Butler – is an atmospheric LP that is soaked in fuzz and reverb. A sprawling 18-song album that materializes in four suites, “Lese Majesty” lives up to lofty hype with help from vintage boom-bap rhymes and modular, threadbare production that experiments with digital amnesty. Though Suite 4 (“The Pleasure Milieu”) bursts with fattening sounds and chorus-driven club stirrers, “Lese Majesty” is, for the most part, divinely understated. In a scene obsessed with algorithms and arpeggiators, Shabazz Palaces have put together something that feels refreshingly analog.


– Jerard Fagerberg
Rusko, UK producer/DJ, is famous for being one of the “godfathers” of dubstep. For his latest work, however, it seems like he’s going for something a little bit different. Over the course of the five-track EP, he blurs genres and sounds left and right, from a bass-heavy track to a trap-inspired banger. The semi-genre-averse music makes for a fun, sunny, and surprisingly funky listen, but, at the end of the day, that’s all it is. Great for parties and getting people moving, and not much more.


Sounds like: a lost B-side from the “Spring Breakers” soundtrack; a kaleidoscopic vision of the big sounds currently blowing up in “electronic” music.


-Tyler Cumella
Hooray for Earth is one of those bands who is the favorite band of many of your favorite bands, and even mores o the favorite band of of many of your favorite producers. Having started as a home recording project right here in Boston (Dopamine Records, whoop whoop), it’s no surprise that HFE has become a band defined by its studio craft and its ear for a full, forward-thinking sound. Unfortunately, it’s that progressive vision that has almost kept the band too far ahead of the wave– a trait that continues to be evident in “Racy.” While some tracks, such as the bass driven “Keys,” could potential tickle the ears of more radio-friendly listeners, in tune with bands like Phantogram or Twin Shadow, some songs reflect a shuffle of so many influences that they lose a good portion of pop appeal, even the album’s title track. The album as a whole is a sonically mesmerizing experience, but sadly, it may take a more acquired listener to give it multiple spins.


-Perry Eaton
The Cool Kids never lived up to the hype of their breakout EP “The Bake Sale,” and both Chuck Inglish and Mikey Rocks (since rebranded Sir Michael Rocks) have since gone rogue in hopes of rekindling the infectious “Yo! MTV Raps” juju they mustered six years ago. However, “Banco” isn’t the album they needed to bring ’08 back. On “Banco,” Rocks seems lost. He pops from syncopated mood pieces to ringtone-ready odes to thug life, never fully inhabiting either. “Fuck Seaworld” is the lone song worth sticker price with – it’s the smoothest motherfucker of the bunch, and it feels good to hear Rocks spit from the cut with slack in his voice – but it ends on a weird, largely mismanaged rant about orca whales. The skits help “Banco” rebuild some of the fun of early-days Cool Kids, but a 5-plus-minute song with Twista and a cookie-cutter DJ Mustard beat are not the keys to throwback enlightenment.


Sounds like: Nightmares of B.o.B., Wiz Khalifa, “Let Nas Down” (the concept, not the actual song)