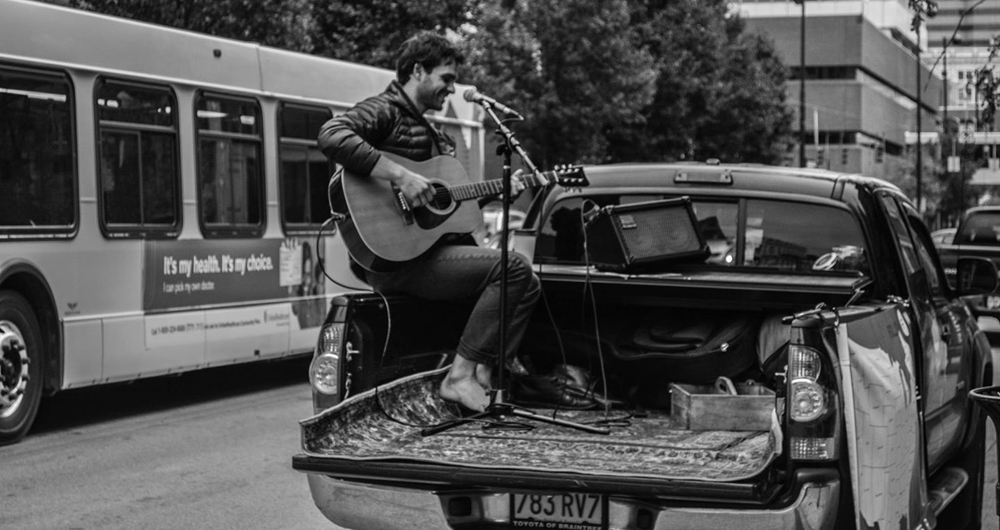 Pablo Picker isn’t all that different from any other local musician trying to make an honest living out of a creative drive. What separates Pablo from the rest of the pack, however, is an idea that allowed him to take his talents on the road– a US tour very different from most.

Today, Picker will play in Harvard Square for the final stop of his “Meter Tour,” a trek that hit all 50 states with the singer using the back of his pickup truck as a stage. Having started performing in the early 2000’s, Picker was a regular Harvard Square busker upon his return to Jamaica Plain from college in 2003, looking for a bit of money and a decent chunk of culture. After graduating to small clubs and coffeehouses, gigging regularly for the latter part of the aughts, the folkateer largely stopped performing for a number of years until releasing his latest album, “You.Me” in 2013, at which point he began to feel the itch again.

“I hadn’t performed in almost 5 years at that point, having taken time to focus on other projects, and was eager to play again,” Picker says. “Having done the coffeehouse and small club scene for many years up to that point, the idea of booking conventional shows and bringing out people felt daunting and uninteresting. As opposed to just playing in Harvard Square again, I wondered if I could take it to the next level and do a regional or even national ‘busking tour.'” 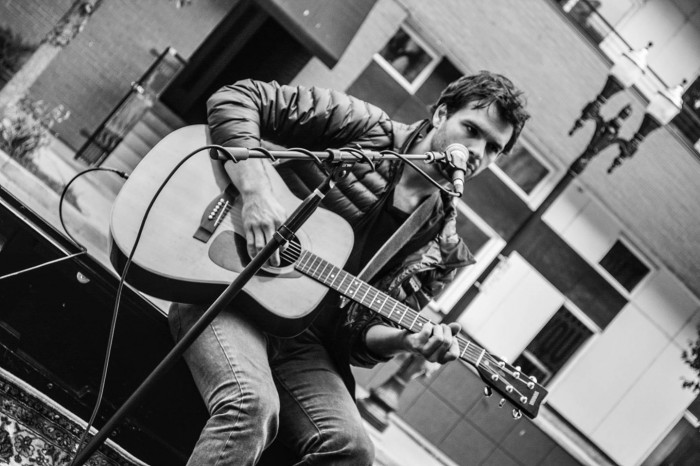 But it wasn’t that easy to dodge the politics of live performance. Most cities, including Boston, require a street performers permit, which he wouldn’t have the time or resources to acquire on every stop. It was at that point that he cooked up a slight alternative to his original plan, asking himself, “what if I were to perform inside the bed of my truck, parked at a paid parking meter, amplified but at an extremely low volume. Would I still need a permit?”

“The idea intrigued me enough that I decided to take a shot, and of course do it big,” he says. “The goal would be to play 1 show in all 50 States, including Alaska and Hawaii with the logical name ‘Meter Tour.’ I had a well defined goal but no real sense beyond that.”

Sounds like a pretty DIY approach, and perhaps a slightly lofty goal to some. Two and a half months later, about $7,000, all self-funded, for gas, food, and the occasional lodging, roughly 15,000 miles tacked onto the odometer, and thousands of interactions with strangers all over the country, wouldn’t you know it– Picker had checked every state off of the map. The greatest challenge of the whole trip, he says: finding parking. 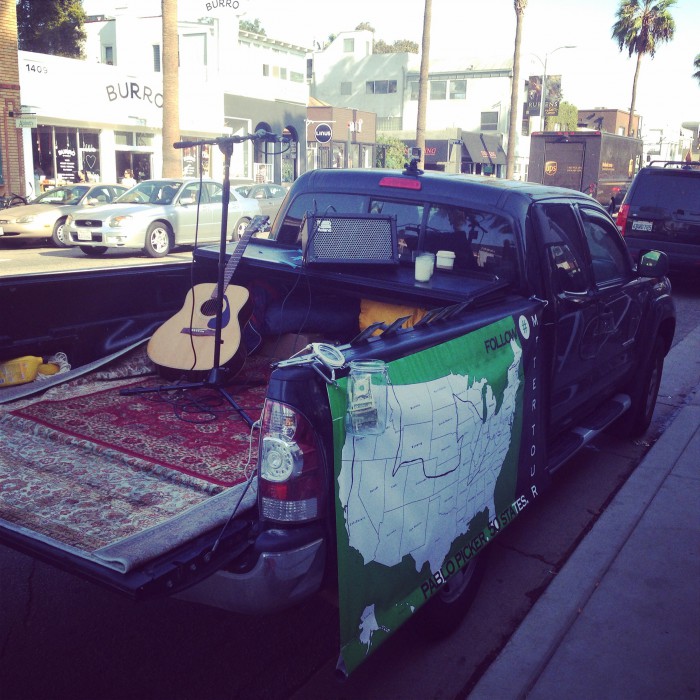 The songwriter had mostly positive experiences all over the map, receiving tips in cities across America, and even being provided with lodging by folks he had never met before. The trip didn’t come without a few shaky situations, though– one of which involved the police.

“[One horror story] came well into tour, in Minneapolis. Two police showed up, with their lights flashing, and told me I was disturbing the peace. I told them to please listen to my volume because part of my concept was to be very diligent in not having an invasive sound. I only wanted people directly in front of the truck to be able to listen, essentially locking into the sonic landscape of the city. To me I couldn’t possibly be disturbing the peace any more than a pack of motorcycles. He didn’t even amuse me, but rather threatened me if I didn’t stop. It was quite a shock, and one which I videotaped. Though I was extremely frustrated I also felt very confident in the fact that I was not breaking any law and certainly not disturbing the peace. I tweeted out to local media and got the story picked up by an online publication. To my surprise I got responses from people who read the article, asking me to please bring Meter Tour back to Minneapolis… that the police didn’t reflect the people’s interest and opinion. It was an awesome moment because it reinforced my sense that I was onto something with this concept.”

Well Minneapolis, you take the prize. Cops just shut me down for "disturbing the peace". The smiles during the hour I played seemed pretty peaceful. #metertour #Minneapolis #police

The run-in only helped Picker’s story make waves, and gave him momentum to push on to the west coast. About a month later, while setting up in San Francisco, a bicyclist stopped him to ask if he was the same musician who had been shut down by the police in Minneapolis. “I laughed and told him that I was,” he says. “It blew my mind that in that exact moment, on that exact street, half a country away, a person riding by recognized the tour. A few of these moments happened on tour… and it became hard to deny that there was a strong and positive energy riding along with me all the way back to Boston. And it’s what I felt every day on the street, in one way or another.”

The best parts, on the other hand, were the interactions he had with the listeners along the way, and the freedom of playing on the street. He describes the liberating experience of not having to worry about how many people show up, how much the bar will make, how much the door will make, or how much of a cut he would get at the end. Instead, it allowed his mind to remain open, fully absorbing the spirit of the trip and the creative joy that it brought him. “Through this project, people who would stop openly discussed their own aspirations and dreams, goals they had accomplished or were still waiting to explore,” he says. “People thanked me for bringing art to the street in this way. People thanked me for ‘making their city a little more beautiful for the day.’ And perhaps that most satisfying feeling was watching people simply smile as they walked by, without stopping, which I would say was the majority. For a moment in time, the ‘Meter Tour’ had altered their state of reality and had broken their sense of the streets… and for that I would say most were happy and appreciative. There was a beautiful feeling of exchange, as quick as it was.”

Pablo Picker “It Must Be Said” from Alice Rabbit on Vimeo.

After completing one Meter Tour, Picker is already eager to pursue another. In early 2015, he will be looking to launch a Kickstarter campaign to raise a good amount of money to do the tour again in the summer. This time around, he also hopes to film the experience for a documentary, explore the possibility of simulcasting every single show live online as a way for viewers to travel along vicariously, and also inquire about having local acoustic artists in different cities come and join him in the truck for shows. If anything is certain, however, it’s that Pablo Picker won’t be off the road for long.

Enter to win a pair of tickets to attend The Hess Collection Seminar and Dinner as part of Boston Wine Festival 2018 at the Boston Harbor Hotel on Wednesday, March 14th. END_OF_DOCUMENT_TOKEN_TO_BE_REPLACED

Perry Eaton writes for Boston.com. Perry Eaton talks on the radio with me from time to time. Today, he talked to me about what he’s been listening to and some upcoming shows and festivals worth checking out. Click here to read more. END_OF_DOCUMENT_TOKEN_TO_BE_REPLACED

Boston band Funeral Advantage is Tyler Kershaw. And Tyler Kershaw had a fun childhood, so it seems. END_OF_DOCUMENT_TOKEN_TO_BE_REPLACED

Perry put me on to daephne and the album blew my mind. END_OF_DOCUMENT_TOKEN_TO_BE_REPLACED