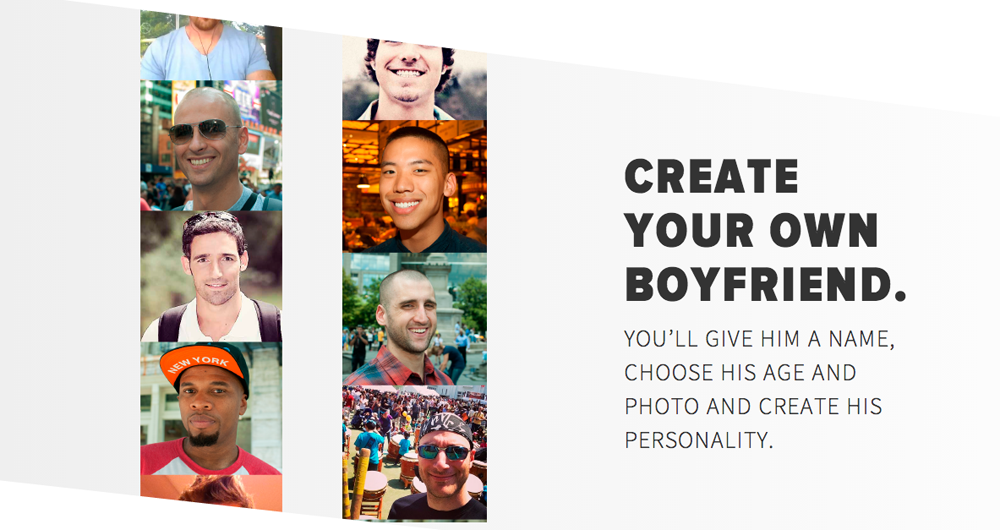 With Valentine’s day (or Singles Awareness Day, as I like to call it) fast approaching, the pressure on our love lives is starting to heat up.

Congratulations if you have a date. And if not, you can always confide in apps such as Tinder to remedy that, but that also means sitting through cheesy and sometimes crude pick-up lines. Instead, it’d be much better if you could customize your significant other.

Invisible Boyfriend lets you do just that. Hell, we’ve all fantasized about ideal qualities in our partner anyways.

Invisible Boyfriend and Invisible Girlfriend essentially brings Spike Jonze’s film Her to life, although you probably won’t be falling in love anytime soon. The app creates a virtual trail of a fake relationship that will make it difficult for pesky parents and curious friends to dispute. It is designed to fill the void in our lonely hearts by sending us text messages, calls, photos and even voicemails to create the illusion of a love story. It doesn’t only benefit those searching for a relationship, it can also help those who are simply uninterested and want to put any relevant questions to rest.

Co-founded by Matt Homann and Kyle Tabor, the app allows you to select their name, age, interests, personality traits and you can fill out how you met. Homann originally pitched the idea at Startup Weekend in St. Louis, Missouri in 2013 where he won first place.

Invisible Boyfriend/Girlfriend launched its beta version yesterday where users can build, or rather buy, their boyfriend at $24.99. This includes 100 texts, 10 voicemails and one handwritten note. Those who may be skeptical should note that users have reported that it doesn’t feel like they are texting a robot. Your make-believe partner replies like any normal person would, making it seem and feel like you’re texting a real, live person. As for the photos of your very handsome boyfriend or your girlfriend who’s too good to be true, those come from a collection of volunteered selfies — a selfie donation box if you will.

The big question becomes: how does it work? Homann told Betabeat that the blueprint behind the app is a “secret sauce.”

It’s hard to decide whether this idea is actually useful or laughable, probably a mixture of both but technology sure has come a long way. Just think, there was once a time where the Internet did not even exist, and now we’ve hit a day where a click of a button and some basic information can get us a virtual and way too believable relationship.

HUBweek came to Boston, and we were there to take it all in. END_OF_DOCUMENT_TOKEN_TO_BE_REPLACED

END_OF_DOCUMENT_TOKEN_TO_BE_REPLACED

It was great having Meredith Goldstein back in studio this morning to talk about the latest edition of Love Letters. Listen to our chat and you’ll figure out why I chose the song I chose to go along with today’s letter. END_OF_DOCUMENT_TOKEN_TO_BE_REPLACED

END_OF_DOCUMENT_TOKEN_TO_BE_REPLACED

Earlier this month, we posted a story about Rob, a man falsely accused of being a sex offender. END_OF_DOCUMENT_TOKEN_TO_BE_REPLACED

We figured we’d do our part in beating this dead horse into the ground, so without further ado, here are some of your Boston favorites like you’ve never seen them before, and hopefully never see them again. END_OF_DOCUMENT_TOKEN_TO_BE_REPLACED

File this under cool cosmetic inventions coming out of Cambridge– two MIT Media Lab researchers are developing nail art decals that will double-time as touchpads to control your phone or laptop with a single swipe. END_OF_DOCUMENT_TOKEN_TO_BE_REPLACED

All Harry Potter fans wait for the Hogwarts acceptance letter that they will never receive and dream of the house they want to join. You can hope to be part of Gryffindor all you want, but the choice belongs to the Sorting Hat. Now, instead of traveling the long journey to magic school, Muggles everywhere can consult a Twitter bot that will decide for you.
END_OF_DOCUMENT_TOKEN_TO_BE_REPLACED