Interview: The Kids In The Hall Hit 25 Years of Absurdity, Perform This Friday 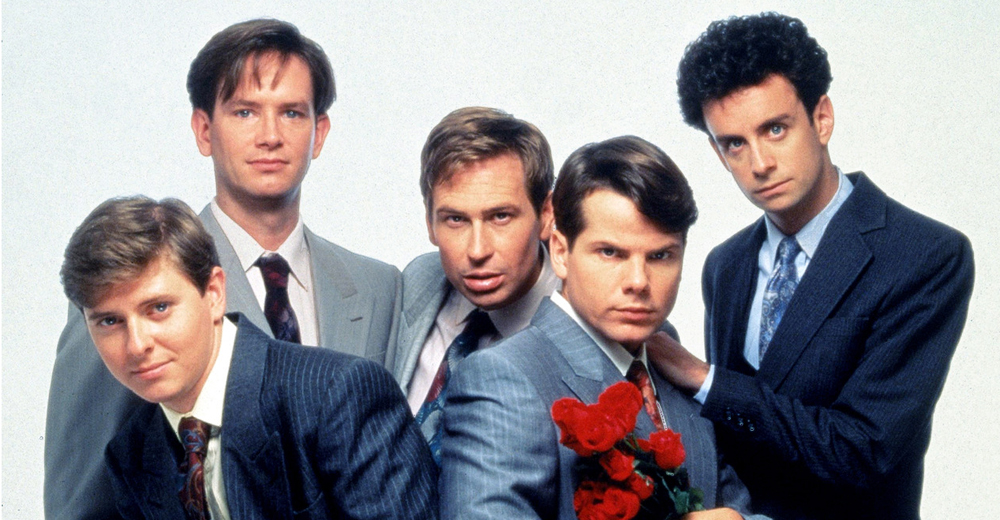 At first, I don’t think Kevin McDonald sounds like himself. It takes a few moments for me to realize, “Of course he doesn’t talk like ‘Pit of Ultimate Darkness’ keeper Simon Milligan, clearly insane person Jerry Sizzler, or any of the numerous women he portrayed on ‘The Kids In the Hall.’ If he spoke with the same histrionic warble of his best-known characters, he wouldn’t be touring fresh material amongst the indispensable late-’80s/early-’90s comedy quintet. He couldn’t order a cup of coffee, go to the post office, or do any day-to-day stuff without freaking everyone out.”

Collectively, the KITH freaked out just the right amount of people during its 1989-to-1995 tenure on HBO – enough to resonate well-beyond the wildest hopes of, for instance, contemporary SNL skits everyone has forgotten by Sunday afternoon. Heralding the live KITH gigs at the Wilbur on Friday, McDonald procrastinated on rearranging pool furniture at his Winnipeg home to tell the BDCWire what’s up.

I was planning to start this interview by talking about how many senses of humor were influenced by afterschool KITH reruns in the mid-’90s, but some reporter in Denver just asked you the exact same question.

What did I say?

I don’t remember either.

I think the scope of KITH influence extends beyond sketch comedy, though.

We were kids when Monty Python came out, so that infiltrated our brains. We’re the nephews of Monty Python, and then we have nephews and nieces, and they have nephews and nieces, and it’s amazing that we’re part of that chain. I think we’re remembered more because of the absurdism, but we also loved and did conventional comedy. We didn’t hit each other with pies or anything, but unlike Python, who did deconstructivist sketches, we had beginnings and middles and ends most of time. It was what was within the sketch, the content, that could be absurd. But we definitely believed in the power of sketch comedy. As kids, most of us loved Carol Burnett and Tim Conway almost as much as we loved Andy Kaufman.

Tell us the origin story of Simon Milligan and manservant Hecubus.

Well, one day, Scott (Thompson), Dave (Foley) and I were walking down a street in Toronto. I forget the street, but it doesn’t really matter. Dave was telling a dark, horrible story from his life, and saying he was a guy with a dark side and demons. Scott joined in, and told some stories about what had happened to him recently, and how many demons he had. I’m not thought of as a guy with demons, so they looked at me and said, “What about your demons, Kevin? Do you have any?” Without thinking, I said, “Yes! The polite demons who would open the door for old ladies who were carrying too many groceries, but demons nonetheless!”

Originally, Mark (McKinney) liked it so much that he was going to be Simon and forced me to be Hecubus. After a few rehearsals, I had my little rebellion, and said “I should be Simon!” Mark said, “Okay, I guess, I’ll be Hecubus.” Then I said “I think Dave would be a better Hecubus!”

When rock bands have been together for 30-ish years, sometime they’re BFFs, but a lot of the time, they sue each other. How do the KITH maintain?

We’re BFFish for sure, but we have the advantage of not being a band. We don’t go on the road six months out of every year. When you see each other less, you appreciate each other more. When we were in our 20s, we saw each other all the time, and it did get pretty ugly, because we’re all strong opinion guys and we all have equal creative shares. There’s no Lennon and McCartney. It’s like we’re all McCartney, so we fought a lot. But as we get older, we definitely appreciate each other more as human beings, not just as comedians.

Who would win if all of you fought to the death?

…I’m imagining all of us at our maddest…I would be the first to go. Bruce (McCulloch) has a lot of spirit, but he’s tiny. He’d be next. Mark can stay mad for a bit, but he can’t keep it up. Then it would be a death match between Scott and Dave. I think Scott can be a little crazier when he’s mad, so I have to say he would be standing over us, victorious.

Between the five of you, you’ve had bit parts in basically everything, but none of you ever became household names.

Nonetheless, I bet you can look at your career and say, “Boy, I’m glad I didn’t grow up to be Adam Sandler or whoever.”

I’m comfortable with my level of fame. It would be hard to take not being able to go anywhere. On the other hand, I sure would’ve liked to have been like Woody Allen or Christopher Guest or Albert Brooks and do a movie of my own every two or three years. I wouldn’t like being trapped doing a movie whether or not the script is good just because I have to because I’m Adam Sandler, but being like Albert Brooks would’ve been pretty amazing. And I could still do it!

END_OF_DOCUMENT_TOKEN_TO_BE_REPLACED

Enter to win a pair of tickets to attend The Hess Collection Seminar and Dinner as part of Boston Wine Festival 2018 at the Boston Harbor Hotel on Wednesday, March 14th. END_OF_DOCUMENT_TOKEN_TO_BE_REPLACED

I referred to it as the “best kept secret” in Boston arts for the holidays. END_OF_DOCUMENT_TOKEN_TO_BE_REPLACED

Boston’s arts scene shines at this time of year. END_OF_DOCUMENT_TOKEN_TO_BE_REPLACED

It’s so much more than a holiday show. END_OF_DOCUMENT_TOKEN_TO_BE_REPLACED

Rock for a cause this holiday season. END_OF_DOCUMENT_TOKEN_TO_BE_REPLACED

Get out and see a show this holiday season, and save some money when you do. END_OF_DOCUMENT_TOKEN_TO_BE_REPLACED

You can help give the gift of music to kids in need this holiday season. END_OF_DOCUMENT_TOKEN_TO_BE_REPLACED

Be honest: when’s the last time you attended a Gala? END_OF_DOCUMENT_TOKEN_TO_BE_REPLACED