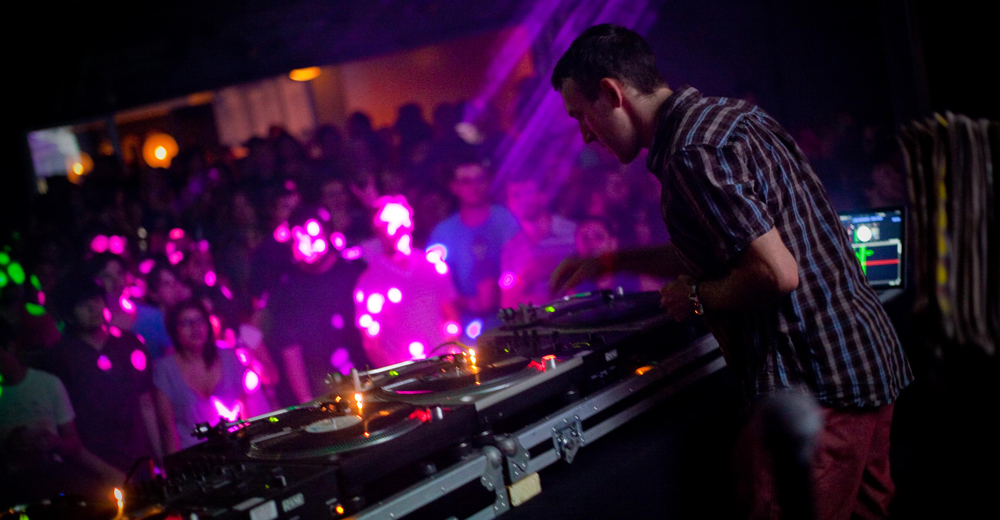 It had been almost three years since influential producer RJD2 has put anything out, but finally he released his most recent album, “More Is Than Isn’t” this past October.

A definite departure from his four previous albums, RJD2’s latest, although still steeped in his usual funky, hip-hop leaning style, shows the 37-year-old artist’s ability to comfortably work across all genres. Part funk, part jazz, and a sprinkling of psychedelic synth arrangements, RJD2 crafts tracks that are not only peppered with vocal collaborations, but prove successful culminations of his previous musical approaches rather than simply a new shift in style.

On the eve of his show at Paradise Rock Club Sunday, RJD2 takes a second to talk to BDCwire about how recording this album was different from the rest and why he gets sick of his records after they’re finished and released.

Q: Heard you would be playing with a live drummer and bassist is that true?

A: There might be some last minute scheduling conflicts, but either way, I’m prepared 110% for either incarnation.

Q: Your music seems to drastically evolve with each album, you did the whole underground rap type production, the more indie sounding stuff, and of course you’re more funky stuff, is there a type of album that you have yet to make but still want to?

A: There’s so many things I’d like to explore musically. The more I grow as a producer and musician, the more things I have ambition to delve further into.

Q: Tell us how a little more about this album and the concept behind it, how was creating this album different than Colossus?

A: This was the first record I’d made in a long time that wasn’t started with any “master plan” of sorts. I just tried to make songs, and be in the moment, with both the composition and the track selection, once recording was done.

Q: Seems like you were really open-ended with this album. There are a lot of thematic changes– we get funk, some soul, even some rock in there. Did you go into this album with that intention?
A: No, I just have a restless nature. If I do the same kind of song twice, I naturally end up moving on.
Q: Your songs are like a culmination of so many different sounds and snippets, walk us through how you construct a song like “Got There, Sugar?”
A: That song started with the middle portion, or the 2nd motif. I didn’t think it was interesting enough to occupy 3.5 minutes, so I bookended it with two other pieces that would provide both contrast, and highlight each other. It’s often how I think– focusing on the juxtaposition of different ideas.

Q: Are you the type of artist that gets bored or sick of listening to your own record when it’s done?

A: I just don’t have much interest, once a record is released. I’ve honestly heard it so many times by then that there’s not much more for me to absorb out of my own song.

Enter to win tickets to see Trio Da Kali at The Villa Victoria Center of the Arts (Newton, MA) on April 10th. END_OF_DOCUMENT_TOKEN_TO_BE_REPLACED

END_OF_DOCUMENT_TOKEN_TO_BE_REPLACED

Enter to win tickets to Rhye at The Paradise on February 28th. END_OF_DOCUMENT_TOKEN_TO_BE_REPLACED

END_OF_DOCUMENT_TOKEN_TO_BE_REPLACED

Enter to win a pair of tickets to attend The Hess Collection Seminar and Dinner as part of Boston Wine Festival 2018 at the Boston Harbor Hotel on Wednesday, March 14th. END_OF_DOCUMENT_TOKEN_TO_BE_REPLACED

Her new album has been pushed back, but we have Kimbra’s new single for you. END_OF_DOCUMENT_TOKEN_TO_BE_REPLACED

The folk duo returns with a new record this week. END_OF_DOCUMENT_TOKEN_TO_BE_REPLACED

Now that we’re done looking back at 2017, let’s look ahead at 2018. END_OF_DOCUMENT_TOKEN_TO_BE_REPLACED