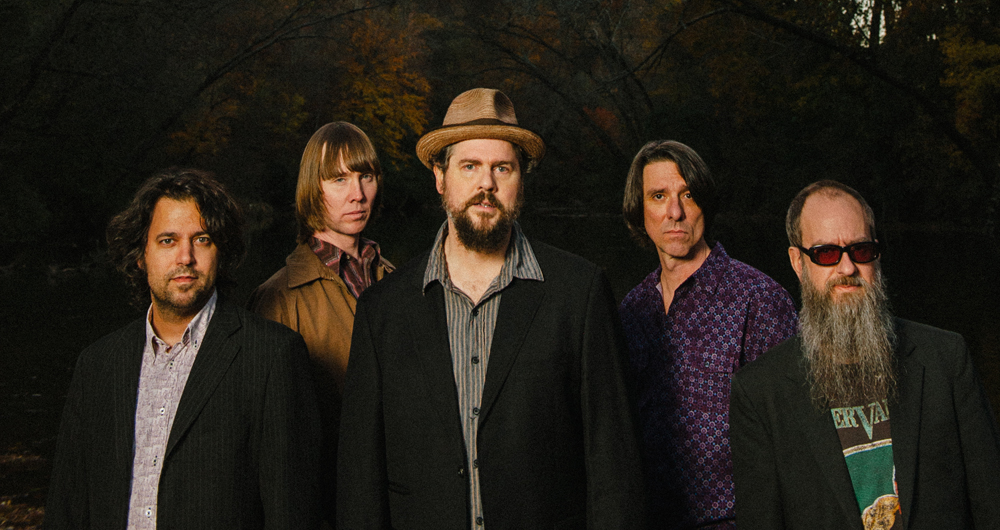 Nearly 20 years after they first got together in Athens, GA, Drive-By Truckers are still breaking new ground. Their latest album, “English Oceans,” comes after a three-year break – not an unusual gap for a lot of bands, but unusual for the Truckers, who have released 14 albums since convening in 1996 (including b-sides and “greatest hits” collections). The extra time off allowed guitarist/singer/songwriter Mike Cooley to write more than he ever had, resulting in an album almost equally split between his songs and those of Patterson Hood, whose writing had dominated the past few releases. Cooley spurred them into the studio, and even sings one of Hood’s songs, a first for the Truckers. Cooley and Hood have both said they think “English Oceans” is their best album to date, and it’s hard to argue with them.

The new line-up, featuring multi-instrumentalist Jay Gonzalez, bassist Matt Patton, and Trucker-for-life, drummer Brad Morgan, is clicking, owing at least in part to a better understanding of dynamic tension on his and Hood’s parts. That serves them well in reproducing “Oceans” live, which they will do at the House of Blues Friday. The album encompasses Stonesy rock (“Shit Shots Count,” “Til He’s Dead or Rising”), folky acoustic songs (“First Day of Autumn,” “Hanging On”), honky-tonk (“Natural Light”), with the Truckers’ ever-present political commentary (“Made Up English Oceans,” “The Part of Him”). “English Oceans” is the sound of a good band getting better. We spoke with Cooley by phone about the new album and his quest for “better bullshit.”

Q. Does this album feel any different to you than previous albums?

A. Yeah, I’m proud of it for one thing. Hopefully the longer you do this, you get better at it and I kind of feel like we have. That’s really the goal, it always has been, to try to make every album a little bit better than the one before. And I was able to write a lot more new songs this time. I felt real good about that. And once we realized we had about an equal number of songs and we could sequence and pace it the same way we do our live show, it was even better. This is the first time we’ve been able to do that.

Q. What were you listening to when you were writing this? What influenced that variety of sounds?

A. [laughs] Oh. I don’t listen to stuff at all when I’m trying to write. Everything’s going to get in your head and it’s going to start messing with you. I did have a wide range. Something like “Natural Light” is so different from anything I’d ever done.

Q. Would you say any of your songs are overtly autobiographical?

A. No, not really. I don’t really know what they are. Some… well, maybe in some ways all songs are. And all songs aren’t at the same time. If that makes any sense. If there’s not some of you in it, it’s probably not real. But you’re probably not thinking that consciously when you’re writing it.

Q. It comes from an idea you have but it’s not necessarily about you.

A. Yeah. Like “Primer Coat” for instance, I had this middle-aged or approaching middle-aged guy in mind, and I didn’t know where I was going to put him or what I was going to have going on in his life, but I wanted him to be, you know, struggling with something. Contemplating something. Making it about his daughter’s wedding came about a little bit later. But I didn’t realize until the song was over, until I’d finished it, that I’d made him my age. So it became more autobiographical than I intended it to be. That’s one example of that.

Q. There’s also the idea that, if the songwriting is effective, there has to be something fairly personal about it –

Q. You said you had this character in mind for “Primer Coat,” how long was he kicking around and how many iterations did he go through?

A. Not a lot. Because I had like the initial image, and I had his daughter’s wedding in there real early. And I kept going, okay, what’s it going to be? What’s going to anchor it? I felt like a jackass when I finally went, well, it’s right there! [laughs] You’ve written that, dumb ass, finish it. And then it was easy. Sometimes I can’t see the forest for the trees.

Q. That last line is a pretty tough one to swallow – “Staring through his own taillights and gathering speed.” That’s evocative in so many different ways. Once the song ends, the character doesn’t end. He’s somewhere following his own demise.

A. Yeah, yeah. Lines like that are real spontaneous. I prefer for people to just decide what they think it is. If I tried to explain it I’m probably going to be as wrong as anybody.

Q. I’ve found that at times, when I think I’m so sure of what a line means and in an interview I’ll say that, and the person will go, “Really? Huh…” Oh, well how badly did I screw this up?

A. There’s sometimes things that I think are obvious that even people real close to me don’t get until it comes out in conversation. I’m like, “No, man, that’s what I was talking about,” and they’re like, “Oh, that’s obvious. Why didn’t I see that?”

Q. Does it ever go the other way, that somebody discovers something about your song that maybe you meant but never thought about?

A. Yeah, that’s happened, but more often than not they come up with a better explanation. It’s complete bullshit, but I like it better than my bullshit, so I go with it.

Q. You start perpetuating that in interviews and things?

A. Oh yeah! I’m like, you tell me what you think it means. That’s what I’m fishing for, I’m looking for better bullshit. [laughs]

Q. How important is it to have some sort of political or social commentary in the songs?

A. That was something that, growing up, it always kind of turned me off. But now here I am at this point in my life and there’s something on almost every bit of it. But I don’t see how you can do it without it. I don’t see how you can get anything out of the process without commenting on the world around you in some way or another. I hate love songs. I really do. If I can’t find some nastiness out there to make some sort of sense of or shed some sort of light on that maybe nobody else has thought of, I just don’t get anything out of it.

Enter to win tickets to see Trio Da Kali at The Villa Victoria Center of the Arts (Newton, MA) on April 10th. END_OF_DOCUMENT_TOKEN_TO_BE_REPLACED

END_OF_DOCUMENT_TOKEN_TO_BE_REPLACED

Enter to win tickets to Rhye at The Paradise on February 28th. END_OF_DOCUMENT_TOKEN_TO_BE_REPLACED

Her new album has been pushed back, but we have Kimbra’s new single for you. END_OF_DOCUMENT_TOKEN_TO_BE_REPLACED

The folk duo returns with a new record this week. END_OF_DOCUMENT_TOKEN_TO_BE_REPLACED

Now that we’re done looking back at 2017, let’s look ahead at 2018. END_OF_DOCUMENT_TOKEN_TO_BE_REPLACED

Our first Song of the Week for 2018. END_OF_DOCUMENT_TOKEN_TO_BE_REPLACED

In a year when so many things were off, the music was right on. END_OF_DOCUMENT_TOKEN_TO_BE_REPLACED