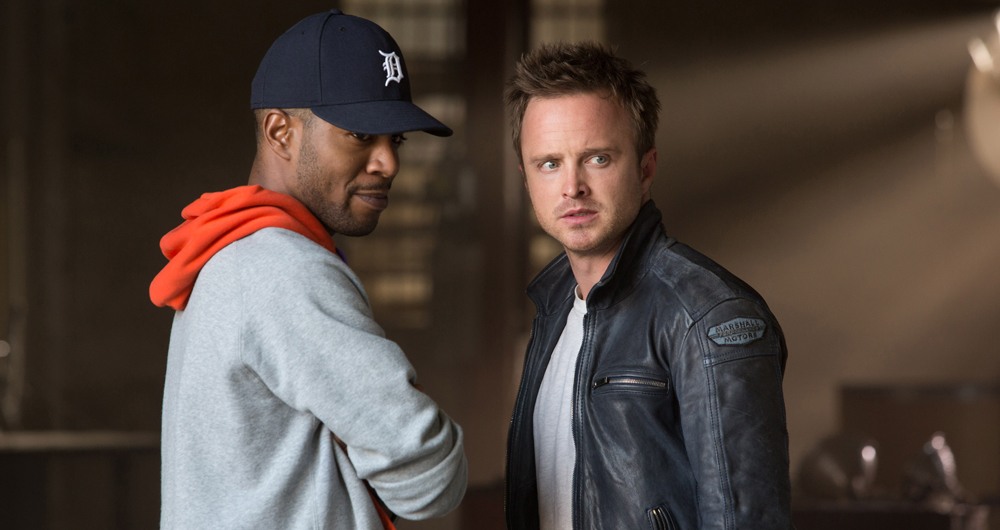 “Breaking Bad” may be over (pass the tissues), but that hasn’t stopped Aaron Paul from breaking the law on screen. This time he’s an offender in the driver’s seat, playing Tobey Marshall, a good guy who can’t seem to get a break. Tobey is hell bent on revenge, even if that means busting all the rules, especially when it comes to a “Need for Speed.” We sat down with Mr. Paul fresh off his night at the famous Cheers in Beacon Hill (where yes, Jesse Pinkman took pictures with fans, signed autographs, and even jumped behind the bar to take orders and call the shots). Aaron discusses his character, the film’s bad-ass stunts, and transforming an iconic video game, “Need for Speed,” into a feature film.

“This is the first time that I have ever been in Boston and I love it,” Paul shared. “I have only been here a couple of days, but it’s great. I love the people here; I love the city. You know I spent a lot of time at Cheers last night.” Of course, after being on AMC’s monster hit “Breaking Bad,” almost everyone knows Aaron Paul’s name (um, um, um, glad you came). Finding it challenging to pick his next role after being so recognizable for “Breaking Bad,” he explained “there was a bit of hesitation for me. I mean, I was so lucky to be a part of the show that I was so passionate about and that people really loved,  so I wanted to be picky on what I was going to do next, and this was it. I started shooting this film the day after I wrapped “Breaking Bad.” I read the script, and it was such a fun crazy ride. It is definitely an action car film, but there was such a great story behind it and I just loved these characters.”

Aaron shed some light on his very dark character, Tobey Marshall. “First of all, I love Steve McQueen [the macho actor one, not the director]. He was a racer before he was an actor. He just lived and breathed cars and that’s the kind of character Tobey is. [Tobey] loves racing and they [the films creators] wanted to do a throwback to the car films that really started the genre.” Aaron added. “This film really follows Tobey, who gets thrown in prison and spends a couple of years there. He got wrongly accused of doing something very terrible and he comes out of prison with revenge on his mind. So, he has to race across the country in less than 48 hours, and he is after a very bad man.” The bad guy Aaron is referring to is none other than Dino Brewster (Dominic Cooper), an evil, self-serving NASCAR driver. To add fuel to this fire, he is dating Tobey’s ex, Anita (Dakota Johnson), and he just so happens to be the guy who caused Tobey’s friend Little Pete (Harrison Gilbertson) to crash. It was that crash that led Tobey to find himself behind bars.

Aaron admitted he’s a seasoned cross country road warrior. He joked about his trip to Los Angeles just after graduating from Centennial High School in Boise, Idaho. “It is an ‘82 Toyota Corolla. Yeah, that was my first car when I moved out to Hollywood. I just packed [that] bad boy up and moved out. I mean yeah, that car could barely make the speed limit, but I loved it. It was my pride and joy.”

Though there is a heavy amount of bromance amongst Tobey and his pit crew of race enthusiasts and mechanics. Aaron joked that there is still one guy from the film that he would like to actually race. “I still want to race our director, Scott [Waugh] (“Act of Valor”). He just loves to talk so much, I would like to get behind the wheel with him.”

Aaron credits Scott Waugh for the guts and authentic glory of the film. “When [Scott Waugh] said he wanted to do the stunts practical, I thought he was out of his mind. But he did it and he did it in a very safe way.” The film boasts several jaw dropping scenes that would make even James Bond envious, including one with a car hoisted in midair by a helicopter as it drives off a cliff, a refueling sequence from one car to another on a highway without stopping, and hold on for the “Bourne” scene with a Mustang jumping a whole slew of cars stuck in traffic.

Aaron added, “I think that [fans of the video game “Need for Speed”] will be very happy that [the film] puts the audience in the driver’s seat. But we were working with a blank canvas, because there is no narrative in the video games. So I think [the fans] will be pleasantly surprised that there is a really great gritty, fun story involved.”

“Need for Speed” is in theaters now.

Golden Globe and Emmy nominee Benjamin Wallfisch is the composer responsible for the score of the hit movie IT. I talked to Ben about his approach to scoring the new version of this iconic story and his thoughts on film and music overall. Some very insightful commentary; listen in. END_OF_DOCUMENT_TOKEN_TO_BE_REPLACED

Rupert Gregson-Williams is an award-winning film composer. He just so happened to compose the score for this summer’s big blockbuster Wonder Woman. We talked about his beginnings in film scoring, film scores that move and inspire him and, of course, Wonder Woman. END_OF_DOCUMENT_TOKEN_TO_BE_REPLACED

Jeff Rapsis is a New England-based composer and performer. Lately, he’s been creating live musical scores for silent film screenings. I talked to him about his process and a few of his upcoming performances at The Capitol Theatre in Arlington and the Somerville Theatre. You can keep track of where else Jeff is scoring silent films here. END_OF_DOCUMENT_TOKEN_TO_BE_REPLACED

Planning on seeing Rogue One: A Star Wars Story when it opens this weekend? I joined Adam 12 to give you an idea of what to expect. But don’t worry, I didn’t give anything away. END_OF_DOCUMENT_TOKEN_TO_BE_REPLACED

No, not from afar, from the comfort of her couch. From the actual awards themselves. That’s where Meredith Goldstein was for the Oscars. She shared all the juicy, first-hand details with me. END_OF_DOCUMENT_TOKEN_TO_BE_REPLACED

To celebrate the opening of ‘The Force Awakens,’ I had some very special guests in studio to start the Thursday, December 17 edition of The Brink. Listen. END_OF_DOCUMENT_TOKEN_TO_BE_REPLACED

Watching the new Star Wars trailer a million times gave us all sorts of feels. And one of those feels was nostalgia. END_OF_DOCUMENT_TOKEN_TO_BE_REPLACED

END_OF_DOCUMENT_TOKEN_TO_BE_REPLACED

If you’ve finally finished crying over Inside Out — or Lava, the short that ran before it — Pixar is readying another assault on your tear ducts with The Good Dinosaur, if its newly released trailer is any indication. END_OF_DOCUMENT_TOKEN_TO_BE_REPLACED