How to Hate the Indianapolis Colts 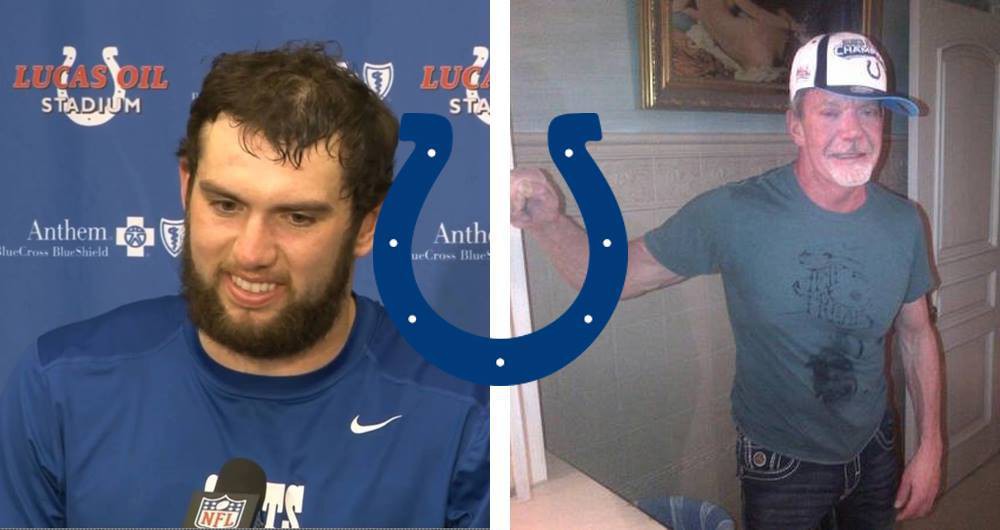 Earlier this week, my colleague Eric Wilbur pointed out that unlike the Ravens, the Indianapolis Colts are not so easy to hate. Baltimore has their “smash-mouth” football and seemingly endless parade of players on the wrong side of the law, not to mention their irritable coach, the second-most annoying skipper in the league only behind his Michigan-bound brother.

But it’s time to get hyped for Sunday’s game, and that means finding reasons you should hate the Indianapolis Colts. Don’t worry, I’ve got plenty.

Before I commence the hateration, I will concede Wilbur’s point that in the grand spectrum of NFL franchises, the Colts are less odious than most. From his column:

Unlike the Ravens, it’s difficult to pinpoint too much to dislike about the Colts, a resurgent group who play behind one of the game’s great, young talents at quarterback, and are led by a gregarious coach who overcame leukemia and is generally regarded as one of the most personable people in the entire NFL.

Man, how are you supposed to hate #chuckstrong? How can you sneer at a quarterback who enthusiastically congratulates opposing defenders when they hit him? Their stadium is the best in the NFL, and has played host to the Big Ten football championship as well as the Final Four. And from what little time I’ve spent interacting with Colts fans, they seem pretty nice, especially compared to their counterparts in New York, Baltimore, Denver, and elsewhere.

But after doing some research, I found that not only are the Colts eminently hateable, I really do hate them now. Here are seven reasons to root extra hard against Indy on Sunday.

This is their owner 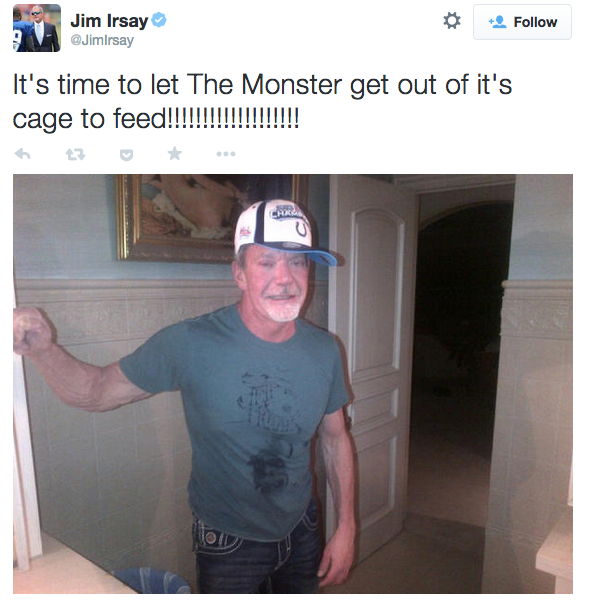 Jim Irsay inherited the team from his dad, Robert. Robert became one of the most hated owners in NFL history when he snuck the Colts out of Baltimore in the middle of the night.

Inheriting a team in and of itself isn’t hate-worthy, but Irsay runs the franchise at the whims of his splashy, ego-driven persona. He had a big hand in trading a first-round pick for Trent Richardson, who was a healthy scratch against the Broncos and has all the makings of a prototypical bust. But you could tell how psyched Irsay was at the prospect of Richardson in Indianapolis based on his tweet at the time of the deal.

This day of MONSTER TRADE,The Tidal Wave Of Deal making…Shocks the system of “..Didn’t see THIS ONE COMING!!!!!!” Grig’s Rollin’ Dice!

He also tweets pictures like the sweat-stained one above, suggesting he paid for some sort of Snow White magic mirror that tells him he’s the fairest one of all no matter how much Ed Hardy he’s wearing at any given moment. He has a huge collection of famous guitars from stars like Jerry Garcia and Bob Dylan (cool!) and is rumored to bring a guitar on road trips and play until 2 or 3 in the morning (not cool!).

Actually working,sorry naysayers..I don’t drink…haven’t in over 15 years..I know when your unhappy or jealous it’s easy to b mean-spirited — Jim Irsay (@JimIrsay) October 21, 2013

I’m allergic to alcohol…I break out in handcuffs,if I drink!!!

Or at least it was, until Irsay was arrested and charged with two counts of OUI. A video of his sobriety check shows he needed the support of two officers to stand. He was also found with pills and $29,000 in cash in a metal briefcase. If any non-superstar player had been caught in similar circumstances, they’d be gone in a second.

The Colts proved that by immediately cutting wide receiver Da’Rick Rogers in September for a DUI. Meanwhile, Irsay was suspended for six games and fined $500,000 by the NFL, a pittance for the billionaire. He also refused to explain why exactly he was carrying $29,000 in a metal briefcase and a bag full of pills, saying he carried that amount of cash all the time. In other parts of the country, police are allowed to permanently seize people’s cash and possessions based simply on the suspicion that carrying $1000 or more in cash indicates the possibility of a drug deal in a controversial practice called civil forfeiture. But if you’re a billionaire owner, you get a break.

One would think that Irsay would at least be contrite about his actions, and show up to Colts training camp chastened, personality reigned in. His response to the whole ordeal? He showed up to training camp and handed out $100 bills to Colts players. For a man so into music, Jim Irsay is completely tone-deaf.

Gah! What’s happening in this GIF?!

Terrible facial hair aside, It seems like Andrew Luck is the golden boy everyone thought he would be coming out of Stanford as the #1 overall pick. He has led the Colts to the playoffs all three years with the team, advancing an additional round each time. He’s described by his teammates as unfailingly generous and level-headed. He is on pace to shatter every single passing record in the book, most held by the man he replaced, Peyton Manning. For God’s sake, he congratulates opponents when they hit him. And all of that is why I hate his guts.

Say what you will about Tom Brady’s fiery nature, I’d rather my quarterback get in the face of his opponents (and maybe even the refs, if he can get away with it) after a big hit. Andrew Luck falls into the same trap that Russell Wilson does for the Seahawks. All you hear about is how he plays “the right way” and he’s a “class act,” buzzwords that are usually code for “a perpetually sunny disposition and zero controversial positions.”

Besides the fact that he sounds like Buffalo Bill when he talks, nothing interesting ever comes out of Luck’s mouth. Some people might like that, but in an era where carefully curated personal brands are desired by teams and sponsors, I’ll take the quarterback who swears on the sidelines, models for Uggs without regard for what others think of him, and generally doesn’t give a damn.

Their coach is the worst motivator

It’s hard to find a reason to hate Chuck Pagano. He seems like a nice dude, and there’s the whole “he just beat cancer, are you really going to make fun of Chuck Pagano, come on don’t be a scumbag” factor. If one coach gets a pass for being sanctimonious, it’s the one who battled cancer to be there.

So I have to give credit to one of the all-time great haters, Deadspin contributing editor Drew Magary, for helping me out on this one with this USA Today article on Pagano’s motivational techniques. Before the season started, Chuck gave Colts players some shirts. But they’re not just any shirts!

Issued to all Colts players, it has the picture of a Lombardi Trophy on the back. To Jackson, who spent the first eight years of his career with the Cleveland Browns, it was just one of the many indications that things are different with the Colts.

Back in Cleveland, see, players didn’t have helpful aids like a shirt with a trophy on it to remind them what they’re working for. They just wore shirts that had a picture of a football on it. Huge difference.

Coach Chuck Pagano had similar Lombardi shirts made last year, emblazoned with the words, “Hoist it.” The current slogan — “Decide” — came from a motivational video one of his daughters discovered on YouTube and shared with him this offseason.

Because once you decide to win, it just happens! The power of motivational tactics found on YouTube cannot be overstated. Ever since I started wearing a shirt that says “Don’t forget to zip your fly” every day, my coworkers have really taken notice. I get that every coach has weird motivational tactics to keep their team focused. Bill Belichick gives the Patriots pop quizzes on their opponents, after all. But for a coach who would seemingly have a wellspring of inspirational tactics at his disposal, finding one on YouTube is pretty terrible.

Their mascot beats up little kids

Lucas Oil Stadium is one of the best stadiums in the NFL. It’s also named for Lucas Oil, an oil and lubricant manufacturer. The company’s co-founder got in hot water for posting this rant to Facebook in October.

“I’m sick and tired of minorities running our country! As far as I’m concerned, I don’t think that atheists (minority), muslims [sic] (minority) nor any other minority group has the right to tell the majority of the people in the United States what they can and cannot do here. Is everyone so scared that they can’t fight back for what is right or wrong with his country?”

As noted by my colleage Jack Andrade, Sergio Brown ruined nearly two seasons of Rob Gronkowski’s incredible career, breaking his arm on an extra point in week 11 of the 2012 season.

One could argue that Brown already got his comeuppance when Gronk threw him out the club during the Pats’ week 11 win over the Colts. But one body slam doesn’t make up for the dashed Super Bowl hopes of the last two years. This time Gronk should throw Brown through the end zone, down the tunnel, and out the stadium.

The Colts franchise is so goddamn lucky

In 2012, the Colts went 11-5, despite scoring 30 fewer points than their opponents. In 2013, they were 11-5 again, again overperfoming their Pythagorean rating — expected wins based on total point differential — leading many analysts to call them lucky. This season the Colts finished 11-5 for a third consecutive year, racking up wins against the anemic AFC South while getting throttled by competent opponents like the Steelers, Patriots, and Cowboys.

On an even grander scale, they might be the luckiest NFL franchise in recent memory. After landing Peyton Manning with the #1 pick in 1998, they had exactly one terrible season while Manning recovered from neck surgery, and landed seemingly the best young quarterback of the decade.

Until the Texans, Titans or Jaguars find a competent signal caller, the Colts could have a run of dominance in the AFC South comparable to the Patriots stranglehold on the AFC East, but twice as long.

If you don’t hate the Colts now, wait until we get to 2020 and they’re showing up in their sixth straight AFC Championship. Maybe then, Indy will get the hate it truly deserves.

Until then, it’s up to Patriots fans to bring the vitriol this Sunday night.

Enter to win a pair of tickets to attend The Hess Collection Seminar and Dinner as part of Boston Wine Festival 2018 at the Boston Harbor Hotel on Wednesday, March 14th. END_OF_DOCUMENT_TOKEN_TO_BE_REPLACED

The Black and Gold continue their run tonight at TD Garden. END_OF_DOCUMENT_TOKEN_TO_BE_REPLACED

Who will make the Class of 2018? END_OF_DOCUMENT_TOKEN_TO_BE_REPLACED

It’s been awhile since we talked Black and Gold. END_OF_DOCUMENT_TOKEN_TO_BE_REPLACED

You’re going to wish you were in the Northern Alps. END_OF_DOCUMENT_TOKEN_TO_BE_REPLACED