Known mostly to Americans for soundtracking one of the Millennial generation’s most traumatic TV moments, British singer Imogen Heap recently announced her latest project to develop gloves that allow musicians to interact with computers via gestures.

The gloves – which resemble a cross between a Theremin and JARVIS – are borne of Heap’s Gloves Project, which focuses on removing physical barriers between musicians and electronic equipment. The so-called Mi.Mu gloves are laced with sensors that pick up on an artist’s hand position and velocity of movement as well as the bend in their fingers and the distance between their digits, allowing musicians to alter pitch and toggle between sounds in a dance-like series of movements. The gloves also pick up on gestures such as closed fists and open palms. 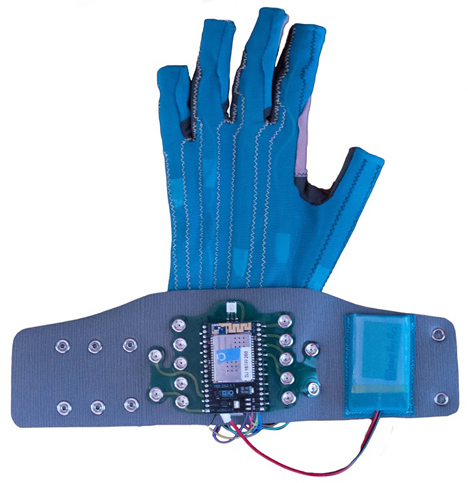 In order to move the project into production, Heap has launched a Kickstarter to raise £20,000. As of press time, she is well on her way to surpassing that goal.

Will Heap’s Mi.Mu gloves be a breakthrough for musicians struggling with knobs and switches during live performances, or will they be another low-adoption technological misstep in the vein of the Segway? Only time will tell, but the implications of the technology spell advancements for all human-computer interactions and not only those on the stage.

Read more about Mi.Mu and Heap’s plans for the project in her interview with Dezeen.

HUBweek came to Boston, and we were there to take it all in. END_OF_DOCUMENT_TOKEN_TO_BE_REPLACED

END_OF_DOCUMENT_TOKEN_TO_BE_REPLACED

Earlier this month, we posted a story about Rob, a man falsely accused of being a sex offender. END_OF_DOCUMENT_TOKEN_TO_BE_REPLACED

We figured we’d do our part in beating this dead horse into the ground, so without further ado, here are some of your Boston favorites like you’ve never seen them before, and hopefully never see them again. END_OF_DOCUMENT_TOKEN_TO_BE_REPLACED

File this under cool cosmetic inventions coming out of Cambridge– two MIT Media Lab researchers are developing nail art decals that will double-time as touchpads to control your phone or laptop with a single swipe. END_OF_DOCUMENT_TOKEN_TO_BE_REPLACED

All Harry Potter fans wait for the Hogwarts acceptance letter that they will never receive and dream of the house they want to join. You can hope to be part of Gryffindor all you want, but the choice belongs to the Sorting Hat. Now, instead of traveling the long journey to magic school, Muggles everywhere can consult a Twitter bot that will decide for you.
END_OF_DOCUMENT_TOKEN_TO_BE_REPLACED

Wednesday was April Fools’ Day, making anyone who has genuinely bad news to deliver at an extreme disadvantage. Powering down for the night, I and some 44,000 other users received the following email from a free, cloud-based screenwriting service called Scripped: END_OF_DOCUMENT_TOKEN_TO_BE_REPLACED