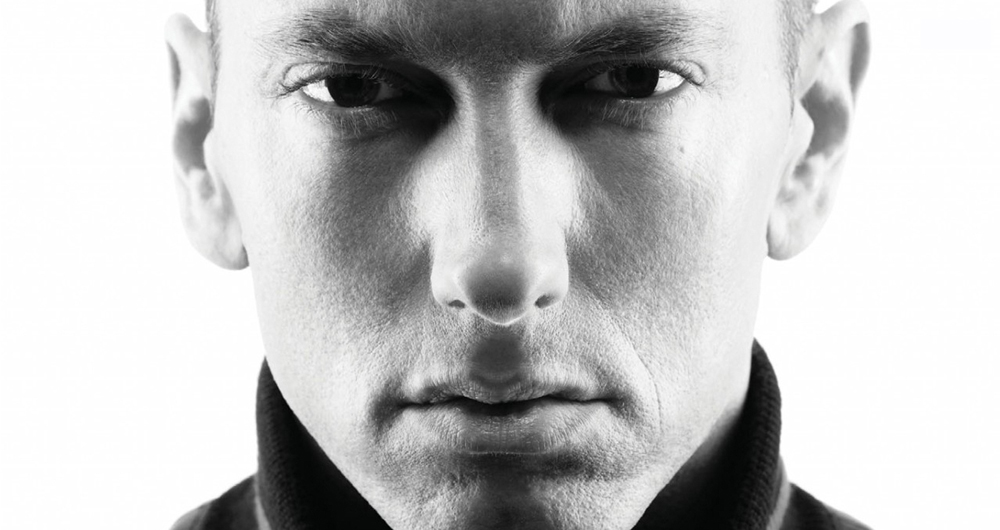 “But what am I going to do when the rage is gone/ and the lights go out in this trailer park,” rapper Eminem wonders on “Guts Over Fear,” released earlier this week. Perhaps lost in the shuffle of high profile releases – did you know Taylor Swift has a new song out?—“Guts Over Fear” is a shockingly conflicted single from an artist increasingly comfortable with generating pop hits like “The Monster.”  In fact, while many have dismissed Marshall Mathers for being past his prime (and perhaps rightly so), “Guts Over Fear” demonstrates he’s still capable of genuine pathos at times.

As a song competing against the likes of latest Ariana Grande single for radio play, “Guts Over Fear” brims with angsty introspection. As an Eminem track, it finds the rapper relatively upbeat, yet again questioning his place in the world.

The song’s early moments capture “Guts Over Fear’s” central question: “The fuck am I gonna do? It’s too late to start over…” Later, he confesses: “all I ever do is to find different ways to word the same old song…how many times can I say the same thing…?” These admissions strike at what the rapper’s been grappling with since his return from drug addled semi-retirement: relevance. That quest for purpose has led the now 41-year-old artist to collaborate with artists and performers who occasionally water down his usual brooding, eclipsing Em’s ability to do what he does best: be Eminem.

Like last winter’s “Monster,” Eminem is again collaborating with pop’s brightest female vocalists, this time with Australian singer Sia, who previously recorded with Mathers on “Beautiful Pain,” a bonus cut off last year’s “Marshall Mathers LP II.” Luckily, Sia allows the rapper enough freedom to openly reflect on his career and how to further avoid spiraling into self-parody. After a lifetime of recording and expounding on his personal life, “Guts Over Fear” finds Mathers “frozen ’cause there’s no more emotion for me to pull from/just a bunch of playful songs that I made for fun.” Maybe true.

In some ways, the song is classic Shady. The release of “Guts Over Fear,” designed to promote the upcoming Shady Records compilation release “Shady XV” this fall, mirrors a similar strategy previously used for Em tracks “When I’m Gone” and “No Apologies.” Both songs were Eminem-specific cuts released as part of a non-solo album project. (“When I’m Gone” being an original record off his 2005 Greatest Hits album, while “No Apologies” was a highlight on the original Shady Records posse release, 2006’s abysmal “Re-Up.”)

Both songs were last vestiges of the Eminem who soared to superstardom: thoughtful, yet self-pitying lyrics coupled with an honest and compelling assessment of his life at the time. Despite its silly title and pop instincts, “Guts Over Fear” is borne out of that tradition. This time the subject is creative inertia, a topic he previously touched on in songs such as “Fubba U Cubba Cubba” and “Evil Deeds.”

On those tracks, the self-acknowledgement was implicit, or a one-off reference. Here, it takes center stage as he attempts to reconcile with himself the ultimate meaning of his legacy, one of the focal points of “Mathers II.”

And so, he soldiers on. Attempting catharsis, the song’s second verse is largely spent on Em embracing his role as champion of the underdog (seeking to conjure the intensity of his most inspirational, empowering song “Lose Yourself”). He spits:

I’d rather make “Not Afraid 2” than make another mothafuckin’ “We Made You” (uh)
Now I don’t wanna seem indulgent when I discuss my lows and my highs
My demise and my uprise, pray to God
I just opened enough eyes later on
Gave you the supplies and the tools to hopefully use it to make you strong

Old Em bristled at the notion of being a role model; new Em postures broadly about it, as if to justify his continued presence in the music world. Ultimately, he concludes: “At least I made it out of that house and a found a place in this world when the day was done…so to the break of dawn here I go recycling the same old song.” There’s a hint of resignation there, as if he’s accepting his fate as a half-hearted advocate for impressionable teens.  But for Eminem 2014 – a man who has survived death, divorce, and near fatal drug overdoses – compromises of this nature are reasonable. He has seen how bad it can get.

In the scope of things, it’s an ironic place for a man who once commanded such an invigorating wit and skeptical outlook of the mainstream (please watch this hilarious video of 26-year-old Shady adjusting to life as an MTV fixture… ohh, the ’90s).

“Guts Over Fear” is a good amalgamation of Mathers’ knack for self-assessment, and his newfound mission statement to create inspirational pop hits for kids. As a pop anthem, it is leaps and bounds above what most of the marketplace is offering content-wise… well, at least it’s better than “Lighters.” (I think most would I agree, I’ll take Mathers working with Sia over Bruno Mars anyday.)

Enter to win tickets to see Trio Da Kali at The Villa Victoria Center of the Arts (Newton, MA) on April 10th. END_OF_DOCUMENT_TOKEN_TO_BE_REPLACED

END_OF_DOCUMENT_TOKEN_TO_BE_REPLACED

Enter to win tickets to Rhye at The Paradise on February 28th. END_OF_DOCUMENT_TOKEN_TO_BE_REPLACED

Her new album has been pushed back, but we have Kimbra’s new single for you. END_OF_DOCUMENT_TOKEN_TO_BE_REPLACED

The folk duo returns with a new record this week. END_OF_DOCUMENT_TOKEN_TO_BE_REPLACED

Now that we’re done looking back at 2017, let’s look ahead at 2018. END_OF_DOCUMENT_TOKEN_TO_BE_REPLACED

Our first Song of the Week for 2018. END_OF_DOCUMENT_TOKEN_TO_BE_REPLACED

In a year when so many things were off, the music was right on. END_OF_DOCUMENT_TOKEN_TO_BE_REPLACED