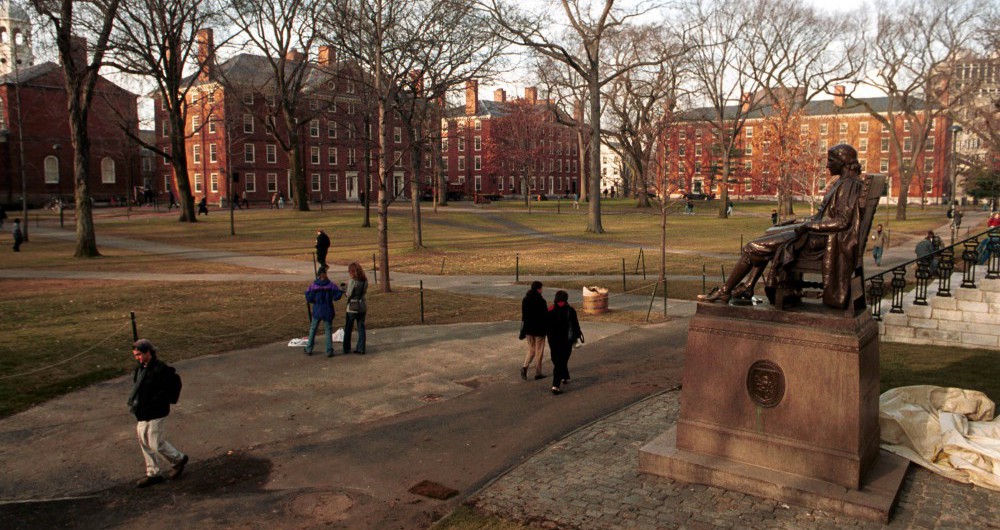 “Who’s influenced you the most in your life?”

Brandon Stanton — creator of Humans of New York — asked 13-year-old Vidal Chastanet that simple question and unknowingly, his answer inspired a campaign that will benefit him, his fellow students at Mott Hall Bridges Academy and an entire community.

For Chastanet, he felt his principal Nadia Lopez was his biggest influence.

Stanton photographs everyday people on the streets of New York and after sharing Chastanet’s portrait on Facebook, he began to further unravel his story; learning about the overwhelming needs surrounding Lopez, Mott Hall, the educators and her students.

“[Lopez] is a force of nature,” Stanton said to CNN. “When she let me sit in on a staff meeting, I got a front-row seat to the challenges that her school faces, and I wanted to be involved in the solution.”

Ultimately, Lopez, Stanton and Director of Programs Monique Achu decided to tackle one issue in particular —”the limited horizons of disadvantaged youth.” The idea to send every incoming sixth grade class on an annual trip to visit Harvard University then emerged.

From generous donations to meeting talk show host Ellen DeGeneres to receiving an invitation to meet President Barack Obama, their story erupted with more than $1 million raised, quickly surpassing their goal of $100,000 — breaking Indiegogo’s record of most contributors to a single campaign.

Principal Robin Williams of Brooklyn Landmark’s Elementary School says the events surrounding Mott Hall was an “act of God” and that $1 million wouldn’t have been raised otherwise. It just shows the difficulty, she adds, in receiving “resources in this community if you’re not at the forefront fighting and advocating.”

The entire campaign highlights not just how a young man strengthened the vision of a school in a disadvantaged community, but also the work that still needs to be done.

While BEES is only in its second year, it’s housed in a run-down building. Beyond having limited resources such as scarce bathrooms and old cafeterias, a simple task of finding an outlet for a laptop can be problematic too.

“I see each school year as a giant puzzle,” Garber said via e-mail. “Each month, week, day, lesson, student, interaction and moment as the pieces. I think one of the things that motivates me is the position I am in to impact so many.”

For Williams, she had to change the mindset of the community nd part of that shift was helping her scholars first see themselves as scholars. When she first started at Brooklyn Landmark, the school had a 19 percent reading level and now it’s over 60 percent.

“With anything, there are always obstacles but the work is the work. It’s hard work,” Williams said. “Above all, my kids motivate me because I want to see how far they can go and they can reach heights unknown. They really motivate me.”

Garber says through all the attention Mott Hall has received, there’s been a constant theme of escaping the Brownsville neighborhood but there’s more to just getting out.

“I think it’s just as important to bring the outside world to Brownsville, to allow the two to meet and intermingle and inspire each other,” Garber said. “My toughest kid becomes sweet, innocent, inquisitive and determined when given the opportunity to talk to someone one-on-one who cares about them.”

Brownsville may not always have the best reputation but according to Williams, the community is changing.

“There’s so much potential and and there’s so much beauty that can come out of this community,” she said. “When you have something that’s going really great, I think that should be more on the forefront than what’s so negative. Then people really see the beauty in the community, and what’s happening and what could potentially happen.”

Looking past physical barriers, Garber says that for him mental health has been one of many struggles and although BEES is partners with a community-based organization that provides social-emotional support for students, it doesn’t always fulfill what is needed.

“We invest a significant amount of time and resources supporting our most fragile students, and it sometimes seems like the world outside our walls is ignorant of this challenge,” he said. “My staff and I try, but we can’t always meet all their needs or give them just the right inspiration everyday.”

Other times, it’s not just about funding but a collaborative movement instead.

“I would love your money, but this community needs your genuine interest, time and commitment much more,” Garber said. “My students need mentors, tutors, coaches and people who can help them connect to opportunities beyond here.”

Garber feels that “the expenditure is equally rewarding if not more.”

Williams add that Brownsville “has the potential to raise leaders, to raise the next generations of Barack Obamas and the Oprah Winfreys.”

“It has so much potential,” she adds. “We just have to continue to nurture that potential.”

Brownsville may not be the best place to be a kid, as Stanton puts it, but it certainly does not reflect all the people living in it.

“Before all of this happened for our school, I felt broken. But all of you gave people a reason to feel a little less broken,” Lopez said in a school assembly. “Whenever you don’t feel like doing your homework, I need you to remember that you’re helping tell the story of Brownsville to people all over the world.”

Enter to win a pair of tickets to attend The Hess Collection Seminar and Dinner as part of Boston Wine Festival 2018 at the Boston Harbor Hotel on Wednesday, March 14th. END_OF_DOCUMENT_TOKEN_TO_BE_REPLACED

We ate vegan blueberry cake and it was amazing. END_OF_DOCUMENT_TOKEN_TO_BE_REPLACED

Dan Croll is a great musician and an even better person. END_OF_DOCUMENT_TOKEN_TO_BE_REPLACED

We kicked off the weekend with a visit from Sasha Purpura, Executive Director of Food For Free. Sasha was back to promote next month’s Craft for a Cause event, a craft beer festival celebrating the Central Square Cultural District. END_OF_DOCUMENT_TOKEN_TO_BE_REPLACED

Summer is the hungriest time of the year. Millions of kids rely on school meals, but in summer, the meals disappear. HGTV’s Taniya Nayak was in studio this morning to talk about Taste of the Nation this coming Tuesday, June 6, which benefits Share Our Strength’s #NoKidHungry initiative. Click here to get your tickets. END_OF_DOCUMENT_TOKEN_TO_BE_REPLACED

Community Servings provides nutritious meals to individuals and families living with a variety of illnesses. Stephanie Carrigg was in studio this morning to talk about this year’s Meals4Moms program, where your contribution not only helps feed moms in need, but nets you some great goodies for a mom in your life. END_OF_DOCUMENT_TOKEN_TO_BE_REPLACED

Continuing our month-long series spotlighting videos we hope will inspire you think. END_OF_DOCUMENT_TOKEN_TO_BE_REPLACED

The first in a month-long series focusing on new songs that go a little deeper. END_OF_DOCUMENT_TOKEN_TO_BE_REPLACED