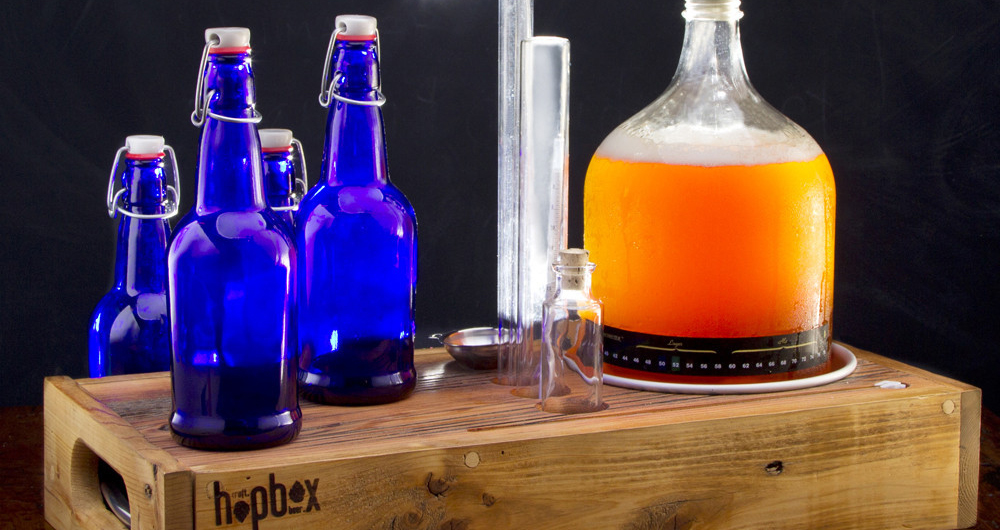 When Michael Langone designed the first HopBox, he quickly put the hand-crafted brewing kit, made meticulously out of rustic pine wood on the Internet, before it was rapidly swooped up and sold to an eager homebrewing neophyte within two hours. If that wasn’t sign enough that there was a market and demand for aesthetically pleasing, well-designed homebrew kits made of all locally sourced materials, then maybe the $56,000 that the company has collected in the matter of a day via a Kickstarter campaign is.

That’s right, Langone and longtime friend and business partner, Mike Gorman, launched a Kickstarter campaign for their collection of HopBox Homebrewing Kits, May 1st, with a goal of raising $45,000 – which will be used to fund a newer, larger, and communal brewing and manufacturing space – and has in the matter of two days surpassed that original figure. Maybe it’s the high-quality glass brewing jugs, or the all original brewing recipes they include with most of their kits that have made people flock to HopBox’s website to purchase one of the four different homebrew kits that the two guys have developed in the span of a year, but either way the HopBox appears to be drawing a lot of attention for its durable and stylish design.

From the “Microbrewer” to the “Double Barrel” kit, every aspect of brewing is provided for – from quality glassware to the durable, highly-portable handcrafted wooden base. Each kit is built by hand in their Somerville workshop from rustic pine and locally-sourced components, and are perfect for brewing cider, mead, and – of course – beer. Coming off a huge first day raising funds for the company’s soon-to-be new space, Michael Langone took a few minutes with BDCwire to talk about the whirlwind of events and why he felt it was necessary to create a more user-friendly homebrewing system.

Q: It’s been a crazy day and half for you guys, did you ever think the Kickstarter campaign would be received so well?

Q: How did you decide to make the first HopBox?

A: I started home brewing back in college and it was something that I really loved to do. I always likened it to cooking; you can put whatever you want in and at the end of the day, it’s not even necessarily about how it tastes, it’s about going through the process and realizing what you can add, or change, or take away from a recipe and discovering what that would yield. I realized that given how popular homebrewing was, there had to be a better way to present the stuff. Less intimidating, more user-friendly. So I started messing around and made one. Since then we’ve just kept tweaking and adding to the style and design.

Q: What did that refining process entail and how did the HopBox evolve to what it is now?

A: A lot of it is jut brewing beer. We ourselves are brewing with these things and we’ll say, ‘wow I really wish that this was over here,’ or ‘I wish this had this extra part that is not included.’ The thing was that I had home brewing experience, I’m not an expert brewer by any means, I like to think that I sort of have the “common man” skills. But I want what I need to brew and I want it to be the best that I can find of those components. Then I sort of put all of those components together in a nice presentation. It’s clear what everything is for and how you use it.

Q: Sort of developing a product for the masses, from the vet to the novice.

A: People are intimidated by this process and it’s really fun. I just want to share it with as many people as possible and if I can make a buck while doing it I am happy.

Q: Tell us about your plans to create a space for communal brewing workshops and better manufacturing.

A: It wasn’t even something that we considered at first because we didn’t understand and take advantage of the local appeal of this product. We’re aiming for it to be a venue where people can not only see how these things are actually made, but if they chose to stop by one day they could brew a batch with us, come in and talk about beer, drink and taste beer, and so on.  It’s a little undefined but we’re going to take feedback and see how things unfold.

Q: Where do you get the materials from locally?

A: We started making these out of all reclaimed wood, but are starting to slowly move away from that because it’s hard to justify the amount of work it takes to work this kind of wood and still make sales and pay for expenses. In the beginning we probably visited every fencing company in the North East, because a lot of these guy will take down these old wood fences made of cedar and wouldn’t know what to do with them. So we would roll up to them and take them off their hands. It’s difficult to work with though, nothing is straight everything is warped and broken. Often times when we were starting out we were shipping these over seas and it was disappointing to us when something we spent a lot of time on and took a lot of pride in would show up broken. We still want to keep the made to order feel, but just make production more streamlined.

Q: Some of the kits come with homebrew recipes, are these original recipes you guys have developed?

A: Yeah, I am the type of person that if I’m cooking a meal I will throw in twenty extra ingredients that I don’t need and don’t improve the product, so I try and keep myself in check when we’re developing these recipes because often times it is nice to have a relatively simple recipe. It’s a lot of research and trial and error and we don’t claim they are perfect, but I think people will have fun brewing them and if they can make their own improvements or they feel like there I a better way to do it, we want them to tell us because at the end of the day we’re just trying to help people brew better beer.

Q: What are you guys brewing right now?

A: I was experimenting the other day with a smoked beer. It’s a heat-smoked malt. We’re serving it at the launch party of HopBox tonight. It’s sort of a nice pairing with BBQ and as we get into Spring it felt right.

Stop by Firebrand Saints in Cambridge tonight starting at 5pm for the official launch party for HopBox Homebrewing Kits.

Enter to win a pair of tickets to attend The Hess Collection Seminar and Dinner as part of Boston Wine Festival 2018 at the Boston Harbor Hotel on Wednesday, March 14th. END_OF_DOCUMENT_TOKEN_TO_BE_REPLACED

This year, the festival is welcoming more female wine producers than ever before, making up 20% of all winemakers that will be at the festival. END_OF_DOCUMENT_TOKEN_TO_BE_REPLACED

The holidays are here, so raise a glass. END_OF_DOCUMENT_TOKEN_TO_BE_REPLACED

‘Tis the season to mix a nice, stiff drink. END_OF_DOCUMENT_TOKEN_TO_BE_REPLACED

Warm up with Tito’s on your sweater and Tito’s in your glass. END_OF_DOCUMENT_TOKEN_TO_BE_REPLACED

There’s a ton going on at Idle Hands in Malden this spring. Dan McDonnell and Josh Deering joined me in studio to talk about Maifest, what’s new in the Taproom, and their collaboration with The Black Ale Project. Oh, and don’t miss Idle Hands at BeerAdvocate’s Microbrew Invitational next month! END_OF_DOCUMENT_TOKEN_TO_BE_REPLACED

Carl Isaacs, General Manager of Renewal by Andersen of Boston joined me in studio this morning to talk about a special offer: save 20% on windows and patio doors and your installation is included. Listen in for the details! END_OF_DOCUMENT_TOKEN_TO_BE_REPLACED

Giovanna Guzman is the marketing coordinator at Kings Bowl, who you can visit in the Back Bay, Burlington, Lynnfield, Dedham, and soon in the Seaport. We talked beverages, naturally, seeing as it’s Thirsty Thursday. And we sampled sangria. And it was soooo good. END_OF_DOCUMENT_TOKEN_TO_BE_REPLACED