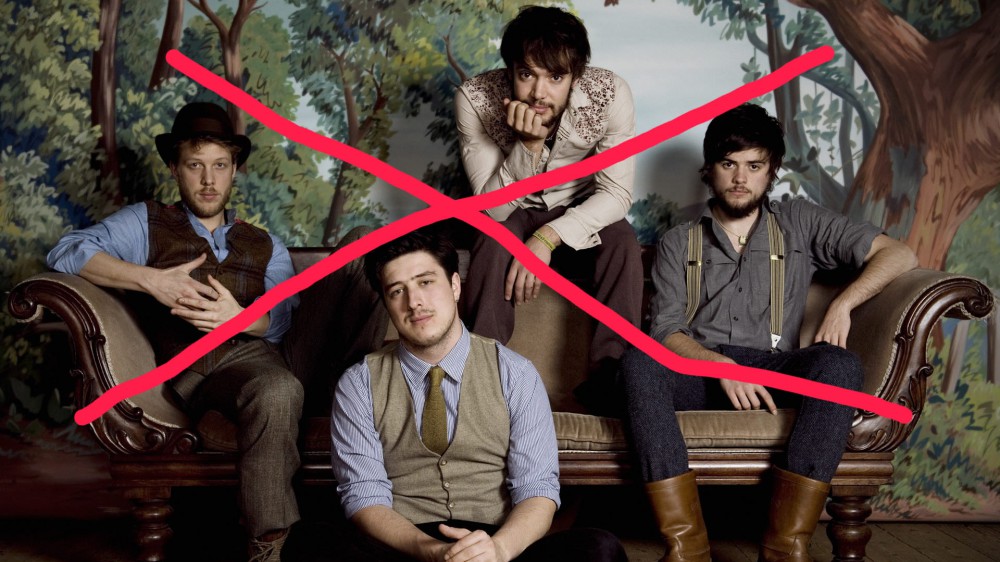 Few things make me want to resort to violence more than turning on the radio and hearing Marcus Mumford’s aggressive wail. Some refer to it as stompcore, Hipster Runoff labeled it as “Civil-War-reenactment-wave,” but whatever you call the hollering acoustic stampede produced by Mumford & Sons, chances are you’re sick of it. Not to worry, we’ve come with a cure. And just like any good cure (from the days of medicine men and witch doctors), this one is entirely locally-grown. Here are a handful of bands from Boston’s backyard that take the pure fundamentals of Mumfy music, from the acoustic twang to the revival-style instrumentation, but make it sound all the sweeter. Let’s face it, some of these bands bear very little resemblance to the Mumfords, but if you’ve ever been caught singing along to any of the tunes from “Babel” that got tremendously overplayed, you may feel less guilty about these options.

Cambridge duo You Won’t takes the emotionally-wrought sentiments of the Mumfords and lightens them the hell up. If the stomp of “I Will Wait” is one of angst and hurt, the casual sway of You Won’t’s “Dance Moves” is a delightful change of pace. The duo appeared at last month’s Boston Calling festival and continues to make noise locally and beyond.
Kicking since 2008, the collective surrounding Boston-based David Wax and Suz Slezak season its songwriting with dashes of bucolic instrumentation. The band’s latest, 2012’s “Knock Knock Get Up,” was a diverse smattering of strings and Calexico-style horns. Another lighter alternative to Mumford-esque sentimentality.
Acoustic trio We Avalanche captures all the glory of mandolin picking and cello humming, but in a more genuine manner. Leaving the percussion at home, We Avalanche encompasses a front-porch nonchalance that is never present in Mumford balladry. To sweeten the deal, they aren’t shabby songwriters to boot.
Similar to Mumford & Sons, local trio The Ballroom Thieves isn’t afraid to stomp a foot here or there. Just check out “Down By the River” from its self-titled EP. It has a like-minded approach to DIY percussion, but the band’s gospel-style harmonies resonate further, grasping a good deal of vocal soul along the way.
This one might be cheating (The Low Anthem is from Providence and the band doesn’t really sound anything like Mumford and Sons). However, it should be noted that the folk collective works sans drumkit (much of the time), like Mumford, and instead achieves a fullness to its sound by getting an echo-y chamber effect to the vocals and acoustic instruments. The band is currently prepping its fifth studio album.
A local supergroup of sorts, Session Americana features a handful of Boston players from various other bands and solo endeavors. The Lizard Lounge regulars have been plucking out neo-folk since 2004, incorporating harmonies that shine in comparison to the overwhelming shouts of Mumford & Sons (though Session has been known to cover “Little Lion Man”). Not to mention, I assume the Mumford boys have gained a few skills on their strings, but the fellas of Session Americana know their way around a mandolin as good as anyone. The band also recently ventured over to Mumford’s side of the Atlantic and landed on Irish TV for the first time.
Portland, Maine, is close enough to mention The Coloradas (plus they play Cambridge on the reg). The duo of Roy Davis and Bernie Nye puts extra importance on songwriting, which, if we’re talking about folk, should be the main focus anyway. The extra bells and whistles are left out of the band’s tunes, making for a true roots sound on its latest, “Big Empty.”
Northampton’s The Sun Parade takes less of an acoustic approach but isn’t afraid to incorporate offerings of mandolin and ukulele. The quintet finds a palatable route to folk-pop that might not directly channel Mumford & Sons, but could certainly be swallowed up by a similar audience.