He saved a little girl from Hurricane Katrina 10 years ago but never got her name. Watch their reunion.

“You rescued me more than I rescued you,” he finally had a chance to tell her.

Former Master Sgt. Michael Maroney worked as a para-rescuer when Hurricane Katrina ravaged New Orleans 10 years ago. At the time, he helped save a three-year-old girl and her family from a roof, where they had been stranded, reported Air Force Times.

When their helicopter landed safely, the girl beamed and gave Maroney a giant hug.

Maroney didn’t even realize when a military photographer snapped a photo of the moment. The picture went viral. Maroney hung it on his wall.

There was one problem: He didn’t know her name.

Since around 2010, Maroney has been searching for the young girl who affected him enormously. He’s reached out to Oprah, posted to YouTube and Reddit, and gotten coverage in the Air Force Times, starting this past March.

News of the search finally, finally made it to now 13-year-old LeShay Brown this spring.

“I was excited that he was looking for me for such a long time,” Brown told People.

Maroney and Brown met in person for the first time on Wednesday’s episode of The Real. (The woman on the left is Brown’s mom, Shawntrell Brown.) 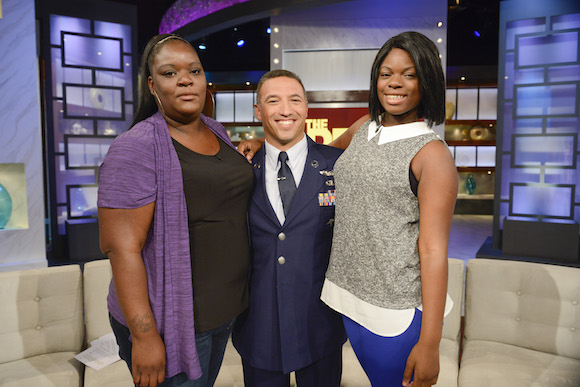 After a hug—of course—Maroney told LeShay, “If I could explain to you how important your hug was: That small gesture, it helped me through bad days and dark days.”

“You have a beautiful smile, and it stuck with me, and it’s helped me, and it has meant a lot to me.” 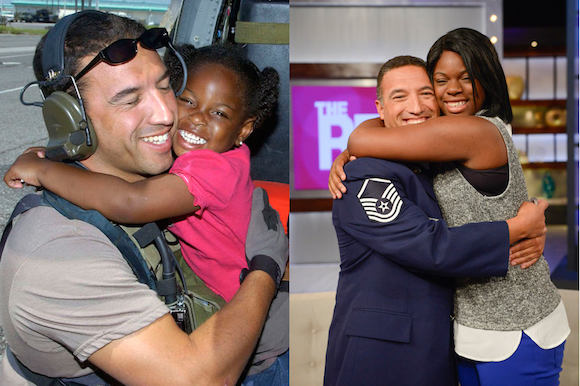