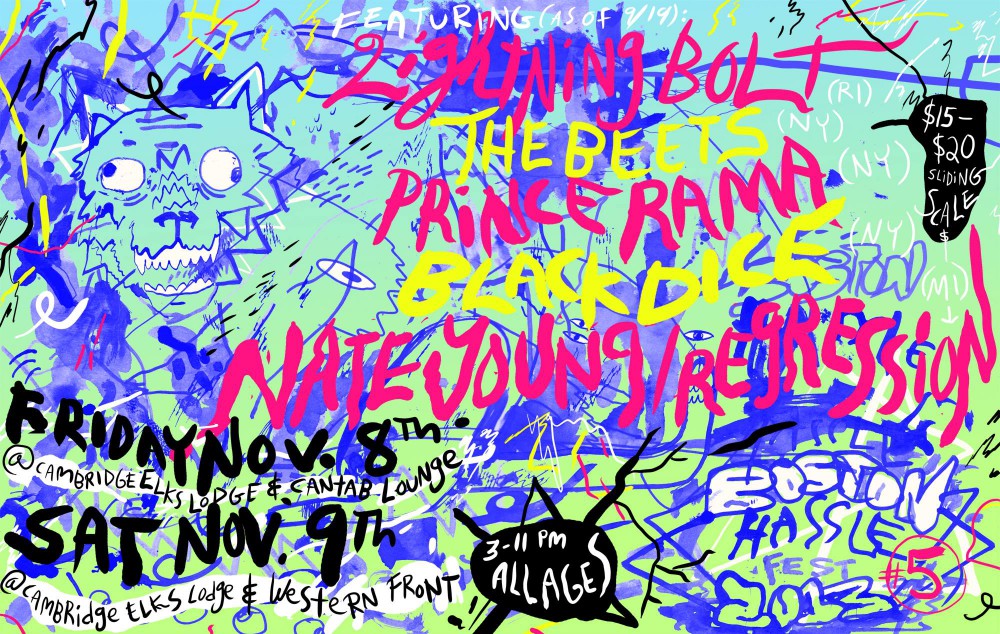 Where does underground music live? Just ask Daniel Shea, one of the founders of Boston Hassle, the organization responsible for Hassle Fest. Now in its fifth year, Hassle Fest is a music festival featuring over 40 local and national acts including Prince Rama, Japanther, Black Dice, and Speedy Ortiz. On paper, the lineup of this festival might not ring the bells of your average music fan, but that might just be the point. Hassle Fest 5 runs Friday and Saturday at Cambridge Elks Lodge.

Shea has been promoting shows in venues throughout Boston for over 10 years. Along with 50-60 other volunteers, organizers meet weekly to plan events around Boston and gather material for both their website and free print publication, The Boston Counter Cultural Compass. Shea says that Boston Hassle as an organization is, “on the cusp of applying for non-profit.” All steps forward in The Hassle’s aim to “provide for a different facet of the music-loving culture in this city.”

This year’s Hassle Fest is one of the biggest events Shea’s team promotes every year and perhaps the greatest embodiment of their mission.

Q. What was the original vision for Hassle Fest and how has that evolved?

A. It started five years ago as Homegrown Fest and initially it was an attempt to bring together bands under the banner of the psychedelic music tag. The tagline for that fest was “a loose psychedelic festival,” and what I meant by that was that we included bands that were doing challenging things, challenging the listener, and bands that we just thought were interesting. I think we found that labeling it a psychedelic festival was misleading, and the next year we really opened it up in terms of genre. We’ve always kept with that same notion of including bands that are different, interesting, or classic takes on different forms. Now it has come to represent, more or less, the types of music that we cover on our website.

Q. The DIY music community has taken a hit in the past year with the police crackdown on house shows. In what ways does Hassle Fest and the other events that you promote aim to reach that audience?

A. We do not organize house shows ourselves, although we support the endeavor as an organization. House shows are illegal, so I’m not sure what can really be done about that. What they do, however, is foster an artistic community that provides a support system for artists and musicians. As musicians work, house shows allow them a more free place not bound by monetary needs, where people can do anything for the sake of performance. It was so important in Boston because, in our opinion, there are no legitimized performance venues that allow for that type of freedom outside of the former house show system. I’m not saying it is a reaction to any sort of crackdown by the police, or if it is, it was a reaction the first time I saw it, or the second time I saw it, because I’ve been doing this for 10 years and it’s all cyclical. But this lack of performance spaces is something that we have tried steadfastly to fix in our own way. We do that by seeking out legal venues that can allow for that type of atmosphere. Those are the spaces that we try to work with and bring to the attention of like-minded promoters around the city. We’re even trying to, and have tried to for quite some time, open up our own performance area of that ilk. Now, we’re closer than we’ve ever been.

Q. Many people will take a glance at this year’s Hassle Fest lineup and not recognize a single name. How do you view this from an organizational and promotional standpoint?

A. Every day we work on combating that. Every day we write about bands and shows on our website and every month many people work many hours to put together our newspaper which shines a light on local music, arts, and film, and includes a huge show listing section. Our aim is to put our excited discussion about both local and non-local artists out into the world in hopes that it serves as a beacon to like-minded people or people who might just be curious in general. In a huge way, it’s basically why we exist.

Enter to win tickets to see Trio Da Kali at The Villa Victoria Center of the Arts (Newton, MA) on April 10th. END_OF_DOCUMENT_TOKEN_TO_BE_REPLACED

END_OF_DOCUMENT_TOKEN_TO_BE_REPLACED

Enter to win tickets to Rhye at The Paradise on February 28th. END_OF_DOCUMENT_TOKEN_TO_BE_REPLACED

END_OF_DOCUMENT_TOKEN_TO_BE_REPLACED

Enter to win a pair of tickets to attend The Hess Collection Seminar and Dinner as part of Boston Wine Festival 2018 at the Boston Harbor Hotel on Wednesday, March 14th. END_OF_DOCUMENT_TOKEN_TO_BE_REPLACED

Her new album has been pushed back, but we have Kimbra’s new single for you. END_OF_DOCUMENT_TOKEN_TO_BE_REPLACED

The folk duo returns with a new record this week. END_OF_DOCUMENT_TOKEN_TO_BE_REPLACED

Now that we’re done looking back at 2017, let’s look ahead at 2018. END_OF_DOCUMENT_TOKEN_TO_BE_REPLACED