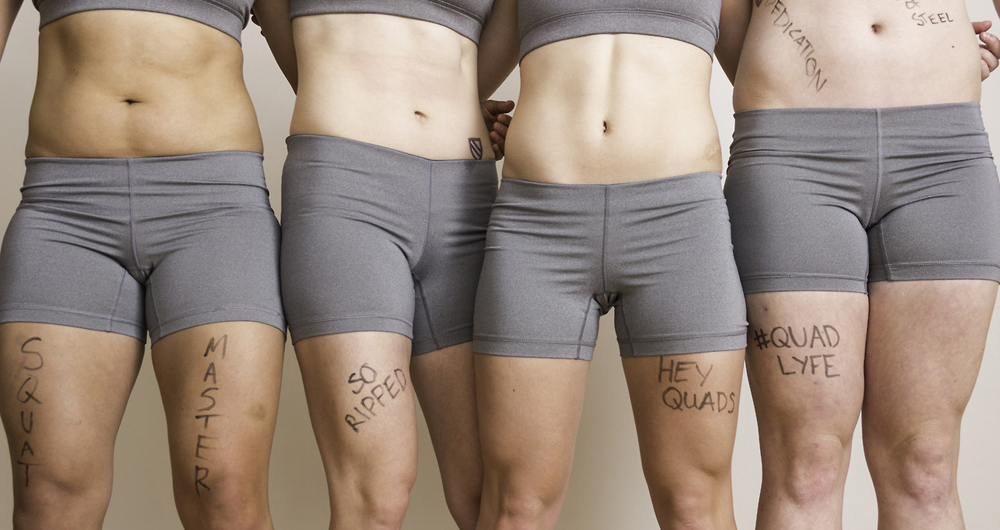 Usually when you think rugby, you probably think sweaty, European men in short shorts, running and huddled up around a ball that has some semblance to our country’s native pigskin. However, the Harvard Women’s Rugby team has published a photo project that not only celebrates everything they love about the sport and the teammates they spend tireless hours with in training, but that shares their message of creating a positive body image for women.

The project entitled, “Rugged Grace,” originated out of the team’s will to open a visual discussion about beauty, strength, and appreciation, particularly when associated with women in athletics. Team members were asked to write what they loved and appreciated about each player, directly on each of their bodies. Many of the words written on their bodies directly addressed the physical: “squat master” on the thigh muscles they had built up during training, or “caught it” on one woman’s hands. Others focused on the women’s personalities: “fearless”, “powerful”, “open heart”, “inspired/inspiring”, “passion and drive.”

In an article on Harvard Political Review, one player asserts that, “While many female athletes struggle to balance societal expectations that say women should be small and delicate with the expectation that athletes need to be strong, our team has created a culture that celebrates every kind of body,” Clark said.

It’s extremely refreshing to see a group of women being proud of the strength they’ve achieved through hours of training and dedication, and to see them actually celebrating the potential for women to be proud of their bodies, in the face of society’s definition of female beauty that so often calls for women to be dainty, overly thin, and timid.

Check out the team’s “Rugged Grace” tumblr to see some of the empowering imagery.

Enter to win a pair of tickets to attend The Hess Collection Seminar and Dinner as part of Boston Wine Festival 2018 at the Boston Harbor Hotel on Wednesday, March 14th. END_OF_DOCUMENT_TOKEN_TO_BE_REPLACED

The Black and Gold continue their run tonight at TD Garden. END_OF_DOCUMENT_TOKEN_TO_BE_REPLACED

Who will make the Class of 2018? END_OF_DOCUMENT_TOKEN_TO_BE_REPLACED

It’s been awhile since we talked Black and Gold. END_OF_DOCUMENT_TOKEN_TO_BE_REPLACED

You’re going to wish you were in the Northern Alps. END_OF_DOCUMENT_TOKEN_TO_BE_REPLACED