Harvard Rejection Letter Has Way Too Much Swag to Be Real

It’s that time of year again. High school seniors across the country are getting letters in the mail that determine their futures. Regardless of whether they’re accepted or rejected, the letters usually follow a tried-and-true template. But this letter, purportedly from Harvard, breaks the mold completely. 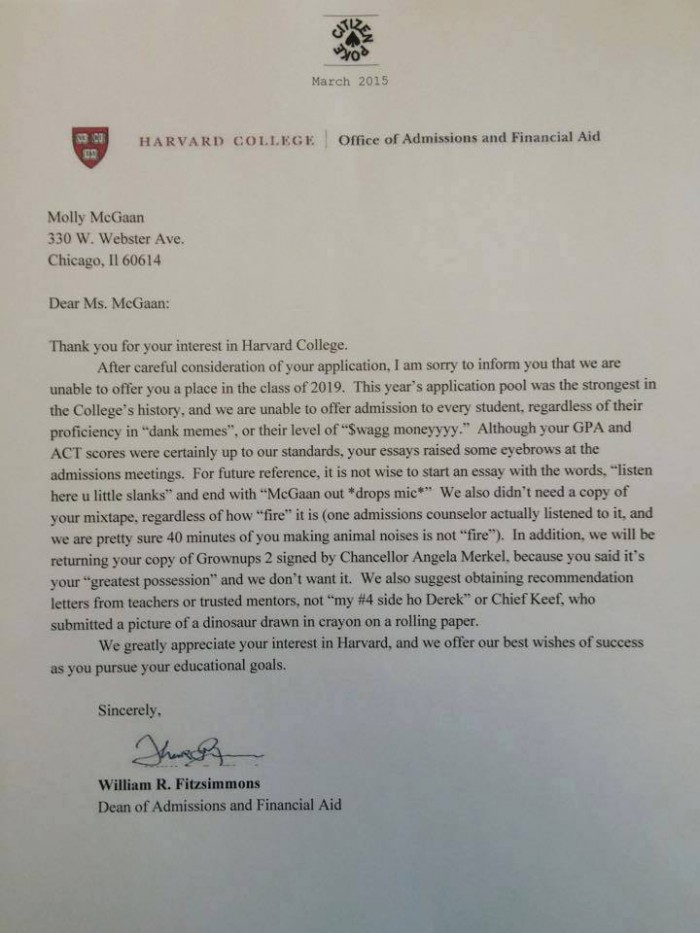 Now we’re not Harvard grads, but we’re gonna take an educated guess and say this letter isn’t real, despite Harvard’s noted Dank Memes department and commitment to the arts via fire mixtapes.

Sharing fake rejection letters has long been a rite of passage for high school seniors, a means of catharsis during the most stressful time of their short lives. My high school had an entire “wall of rejection” where students taped all the polite no’s from the colleges of their dreams, and without fail, one or two letters like this one got posted. (One guy even used a fake college letter to ask his girlfriend to prom last year.)

Still, given the recent profane correspondences we’ve seen emanating from Harvard Yard, nothing would shock us anymore.

UPDATE (5:30 PM): It turns out that the student who made the fake letter, Molly McGaan,  really did apply to Harvard, and clarified in a Facebook post that the satirical letter was written for a comedy magazine at her high school The catch? She hasn’t been accepted or rejected yet, and is hoping that the attention her letter is getting won’t hurt her admission chances.

“People legitimately think it’s real, which is so bizarre to me. It’s just so insane,” McGaan told the Boston Globe. “I have no clue what this is going to do to my Harvard [application].”

According to the Globe story, Harvard officials were aware of the fake letter, but wouldn’t comment.

Enter to win a pair of tickets to attend The Hess Collection Seminar and Dinner as part of Boston Wine Festival 2018 at the Boston Harbor Hotel on Wednesday, March 14th. END_OF_DOCUMENT_TOKEN_TO_BE_REPLACED

Boston band Funeral Advantage is Tyler Kershaw. And Tyler Kershaw had a fun childhood, so it seems. END_OF_DOCUMENT_TOKEN_TO_BE_REPLACED

Perry put me on to daephne and the album blew my mind. END_OF_DOCUMENT_TOKEN_TO_BE_REPLACED

END_OF_DOCUMENT_TOKEN_TO_BE_REPLACED

Ted Regan of the family-owned and operated Mass Bay Lines joined me in studio this morning. This summer, Mass By Lines is celebrating their 50th anniversary by adding a variety of specialty cruises to their well-known Harbor Tours, Sunset Cruises, and Starlight Cruises. Click here to enter to win VIP passes that will get you on to any cruise for free for the entire summer! Click through to listen to my chat with Ted. END_OF_DOCUMENT_TOKEN_TO_BE_REPLACED