Hannibal Buress on Louis CK endorsement: ‘I made him say that’ 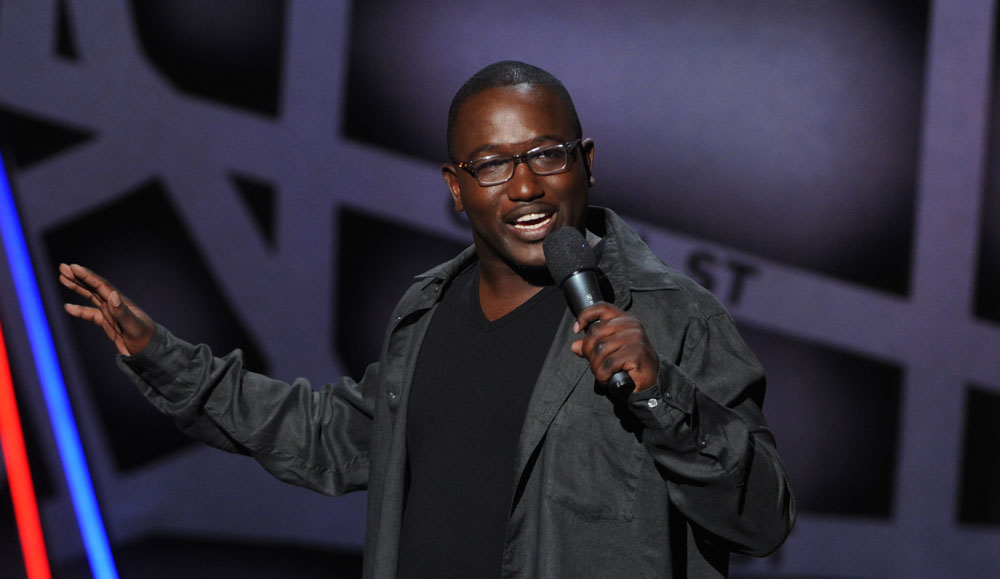 In the past few years, Hannibal Buress has gone from playing clubs like Great Scott to headlining the Wilbur Theatre, which he will do for two shows on Saturday night. He has earned the praise of Louis CK, who cited him in a Reddit interview on a short list of comedians who make him laugh (it was two names, Buress and Zach Galifianakis). And his offbeat point of view and laidback delivery have led him to writing gigs on “Saturday Night Live” and “30 Rock,” working in front of the camera on “The Eric Andre Show” and “Broad City,” and doing voiceovers for the new animated FX series “Chozen.” His “Gibberish Rap” was a standout bit at the Oddball Curiosity and Comedy Festival in September on a bill that was headlined by Dave Chappelle and Flight of the Conchords, and his new special, “Hannibal Buress: Live From Chicago” debuts on Comedy Central May 29. We caught up with him earlier this week by phone.

Q. Do you still do the “Gibberish Rap” live?

A. I still do it live. I am getting tired of it, so when I do it live you might see how dead in the eyes I am. But I still do it. I’m retiring it soon.

Q. Is it the same every time? Do you improvise any of it?

A. The parts in between the song, I’ll improvise that — the shit-talking that I do in between the song. But for the most part, it’s real loose. I have my DJ there and the dancers. But it’s actually fun to do. I don’t get that dead in the eyes. If I have a gap between me doing it, like if I haven’t been on the road for three weeks and I go back out and I do it, “Oh yeah, this is fun. I forgot how fun this is.” But if I’ve been doing it days and days in a row, I can start thinking, “Man, this is dumb. I need to do something else.”

Q. Are you working on all new material now that the special is set to be released on March 29?

A. Yeah, that’s on March 29. This show’s on March 8. So Boston’s getting all of that material. [laughs] No, I’m working on some new stuff, so it’s a nice chunk of new stuff and some stuff from the special. That’ll be the Boston show.

Q. Did you ever want to be a musician?

A. I did! I used to, and I think I still do actually! I used to rap a lot, I still rap for fun. I used to always freestyle with my friends, and even before I started doing comedy, I recorded a lot of songs with a friend in Chicago and I’ve always been around the music world. When I started out doing comedy, I hosted music open mics and poetry open mics. I was just always around that world. I’m a big music fan and I like goofing around and making music when I can.

Q. So we might see a music album at some point?

A. Nah. No albums. I’m working on a couple of songs with people. I did a song on Open Mike Eagles’ album. He’s a rapper based in L.A. now, and I did a verse on his song. I’ve done a couple of other things for people. I enjoy making music. It’s just a different way to be creative. And it’s just exciting, especially when I get to do, because I’ve been doing comedy for so long where it still is satisfying, but it feels more like a routine, and I’m always doing it. It’s my job. So if I go to make music or record some music real quick and it’s something I enjoy, it’s hitting me in a different way, just because I don’t get to do it all the time.

Q. Were you and the rest of the cast surprised that “Broad City” did so well so quickly and got renewed for a second season so early?

A. I felt like the show would do really well. I had a good feeling it would connect. I didn’t know it would get the second season order that fast. That’s not normal, for a show to get ordered after, I think it was after the fourth episode or something like that. Usually, they let a season play out and then they decide. But Comedy Central decided to order it. And they moved the tour, they had to move the tour because they’re starting up writing either this week or next week. I think they were supposed to be in Boston today, actually. But that’s really cool for them. I’m happy to be a part of it, man.

Q. So much of “The Eric Andre Show” seems so random. How is that put together? How much of that is scripted?

A. It’s a mixture of structure and chaos. There’s a lot of structure. There is a lot of improvising on set. We’re able to just kind of let loose. The format and the way we shoot allows for that. Sometimes we’ll shoot an interview, and we’ll interview someone for 45 minutes, and we’ll only use 30 seconds of that interview in the show. So that allows for a lot of failure, a lot of stuff on the cutting room floor, and we can just kind of find moments and see what works best. Basically I’m saying we waste a lot of digital film, or whatever. We waste a lot of megabytes.

Q. What does it mean to hear Louis CK say that you’re one of just a couple of comedians who make him laugh these days?

A. It don’t mean much because I made him say that. You’ve just got to do what you’ve got to do in this business to get ahead. So I knew I needed a Louie cosign, so me and my friends went over to see him for a little bit.

Comedian Myq Kaplan is a comedian named Myq Kaplan. He joined me in studio this afternoon, and he’s at Laugh Boston this weekend. Click here for tickets. END_OF_DOCUMENT_TOKEN_TO_BE_REPLACED

My goodness, I love Sue Costello. It was great having her back in studio today to talk about her one-woman show, #IAmSueCostello, playing tonight at the Revere Hotel. Click here for tickets. END_OF_DOCUMENT_TOKEN_TO_BE_REPLACED

Trump Takes On…Boston! is running now through election night at Laugh Boston. David Carl was back in studio this afternoon to talk about bringing Donald Trump to the stage, the cathartic element (for both him and the audience) and how audiences have been reacting so far. END_OF_DOCUMENT_TOKEN_TO_BE_REPLACED

Trump Takes On…Boston! has arrived at Laugh Boston. I had comedian David Carl, who is portraying Trump, in studio this morning to talk about the show. END_OF_DOCUMENT_TOKEN_TO_BE_REPLACED

Lachlan Patterson made me laugh this morning. Let him make you laugh this weekend at Laugh Boston. Click here for tickets, and click “more” to hear our conversation. END_OF_DOCUMENT_TOKEN_TO_BE_REPLACED

It was great to have Alonzo Bodden back in the RadioBDC studio this morning. Don’t miss him at Laugh Boston this weekend! Click here for tickets and info, then click through to hear my interview. END_OF_DOCUMENT_TOKEN_TO_BE_REPLACED

You know him from Bar Rescue, so see him at Laugh Boston this weekend. Comedian Owen Benjamin was in studio this morning with his dog Ben. Catch him Friday night at 7:30 or Saturday night at 7:30 and 10. Click here for tickets, then click through for our chat. END_OF_DOCUMENT_TOKEN_TO_BE_REPLACED

END_OF_DOCUMENT_TOKEN_TO_BE_REPLACED

I love major league baseball. And I really love when MLB managers lose their minds. (NSFW audio ahead, be warned.) END_OF_DOCUMENT_TOKEN_TO_BE_REPLACED