Hamilton Leithauser Follows the Lead of his Favorite Fifties Crooners 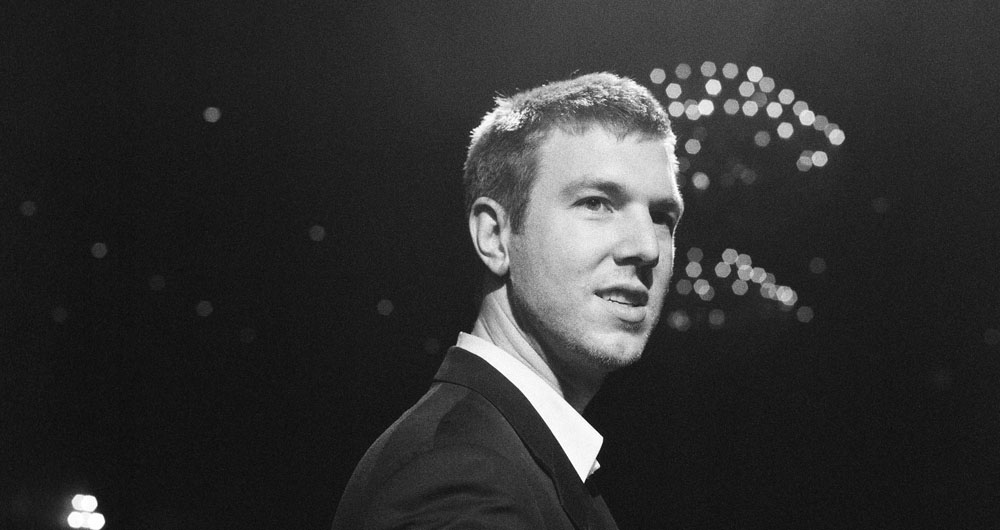 Spotlit, tuxedoed, and flanked by sequined flappers, Leithauser crooned to an old love; gone were the frenzied howls, onstage contortions, and jangly sonic backdrops. A changed artist filled the frame.

Like the video, “Black Hours” is a throwback. Sedate arrangements and melancholic memories abound. “I Retired,” the seventh track, even features some cavernous doo-wop harmonies. It’s different.

Despite all of the signs indicating otherwise, Leithauser hasn’t actually altered anything. He’s merely pursued a sound that has fascinated him for years: fifties pop in the vein of Frank Sinatra, whom he discovered in the midst of a teenage punk phase.

“I grew up in Washington, D.C. so Fugazi and Bad Brains were my favorite bands, but for some reason I liked ‘In the Wee Small Hours’ (Capitol),” Leithauser says. “Unfortunately, I didn’t listen to it a lot and sort of rejected it thinking it was the least-cool thing in the world.”

Years later, as lead singer for the Walkmen, Leithauser rediscovered Sinatra and his proclivity for lush arrangements. In late 2013, with the band on an “extreme hiatus” and the legendary crooner on his brain, the singer decided to make a solo record.

“I chose Frank [Sinatra] as the starting point,” he says. “When the Walkmen first discussed not working together again, I had already written some songs and I had assumed they would become big rock songs but if I was going to make a solo record, it needed to be string-focused. I started writing string arrangements and basing everything around my vocals.”

“The drama I used to write off as cheesy, started to sound fun,” he says.

“Black Hours” does indeed begin on a dramatic note. On “5 AM,” the opening track, a sparse orchestral introduction unfurls into a grim waltz. Leithauser’s sharp tone cuts through the instrumental murmur. “Listen, summer’s coming,” he warns.

“When I think of [Orbison], I think of “In Dreams” –– that soaring orchestration,” Leithauser says.

To achieve the rich instrumental mix that drives the album, he recruited a host of collaborators. The album includes major contributions from Walkmen guitarist Paul Maroon, Rostam Batmanglij of Vampire Weekend, Richard Swift of The Shins, and Amber Coffman of Dirty Projectors.

“When I work on music, I’m usually alone. That’s how it’s been for years,” Leithauser says. “For this record, it was fun to meet up with everybody and play. When you gather all these talented people, there’ll be good surprises.”

The fifties-era drama that permeates “Black Hours” also found its way into the non-musical aspects of its release. On the album cover Leithauser, streaked in contrasting bands of black and white, grins against blurred stage lights. The photograph calls to mind the many Sinatra releases featuring the seemingly amused vocalist.

In the months leading up to the album’s release, Leithauser uploaded a number of nostalgic, family-video-style song previews. Song snippets play as scenes of shoreside horse races, roller coaster rides, and country drives cycle through –– fitting landscapes for a record that captures an era at once glamorous and somber.

Enter to win tickets to see Trio Da Kali at The Villa Victoria Center of the Arts (Newton, MA) on April 10th. END_OF_DOCUMENT_TOKEN_TO_BE_REPLACED

END_OF_DOCUMENT_TOKEN_TO_BE_REPLACED

Enter to win tickets to Rhye at The Paradise on February 28th. END_OF_DOCUMENT_TOKEN_TO_BE_REPLACED

Her new album has been pushed back, but we have Kimbra’s new single for you. END_OF_DOCUMENT_TOKEN_TO_BE_REPLACED

The folk duo returns with a new record this week. END_OF_DOCUMENT_TOKEN_TO_BE_REPLACED

Now that we’re done looking back at 2017, let’s look ahead at 2018. END_OF_DOCUMENT_TOKEN_TO_BE_REPLACED

Our first Song of the Week for 2018. END_OF_DOCUMENT_TOKEN_TO_BE_REPLACED

In a year when so many things were off, the music was right on. END_OF_DOCUMENT_TOKEN_TO_BE_REPLACED