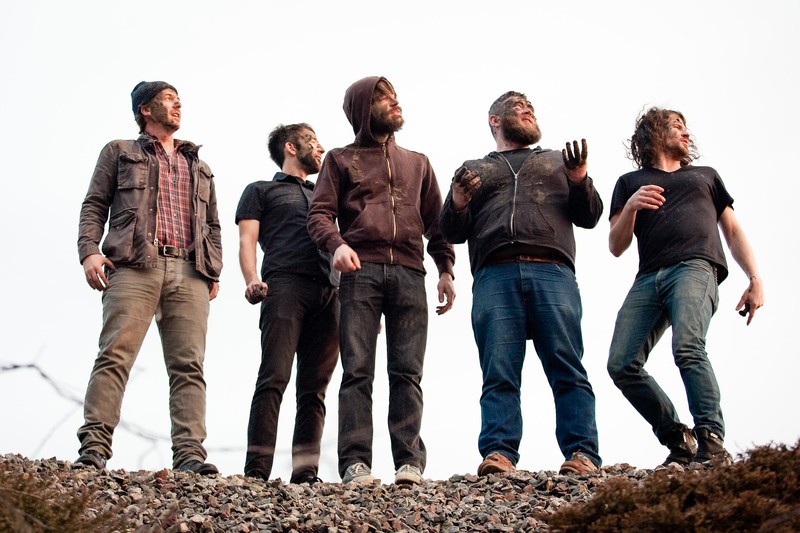 Hallelujah the Hills is gearing up to record its fourth full-length “Do You Have Romantic Courage?” and already frontman Ryan Walsh has looked for ways to “make other people part of the creative process.” With a Kickstarter campaign underway, he and his band will have plenty of time to make sure that happens before they record in February.

“Do You Have Romantic Courage?,” which Walsh admits may be a working title, is also a track on the album and the name has evolving significance. “I did ask someone that in real life once, early on in dating,” he says. “But to me, it has grown from there and can take on so many interpretations.”

Get your first taste of the album now with an exclusive demo of “Pick Up an Old Phone” and find out what the band is planning for its new release.

Q. The Kickstarter is up and you guys are off to a great start funding it, but how far along in the creative process are you with this album?

A. I’d say it’s about three-fourths finished, written and rehearsed with the whole band, so we’re definitely ready to go with it. I wanted to do some interesting things this time, as far as having a title and having album artwork ready when we ask people to pre-order. Deciding those things in advance has been fun, too. It gives you this leg up with each song you learn, knowing the end goal.

Q. And you’re going to be live recording it all in one swing?

A. We’re going up to Rochester, N.Y., for five days, sleepaway camp-style. We’re going to record it all there, just the five of us, no guests, which is something we’ve never done before.

Q. You must have a certain level of confidence to be able to nail it down in five days.

A. For the last album, we recorded two songs a month for five months. In between those dates though, there was a whole month to kind of second guess ourselves. I’m interested to see this time what an album from us will sound like in a vacuum.

Q. As far as Boston bands, you guys have outlasted the stereotype and stuck around. How has the local scene changed from when you started?

A. I’m not sure I’m the best judge of that, because sometimes I’m really plugged into the local bands, and other times I’m not. But I am proud that we’ve stuck around longer than the average expiration date. Personally, I think that’s when bands become most interesting, when you can see them develop over a long period of time. In two years, you might get some incredible songs but you’re not going to see that story develop. That said, I love playing with new bands and discovering their music.

Q. You tend to play bills with good variety, too.

A. To me, there’s nothing more boring than a jaded rock musician or fan. I have no time for that. You have to always be open. That’s how you’ll stay interested and stay interesting.

Q. After a few albums and a bunch of tours, how do you honor your band’s history and at which point do you clean the slate?

A. I think the only time we felt any sort of pressure was on our second album because it was the only time that we knew while recording that it was going to be released on a label. At that point, we felt a bit of pressure and some expectations to live up to these business people who had put this confidence in us. I love that album but we really tried to reach in every direction. It was like a Whitman’s Chocolate sampler. Besides that instance, we have always taken a very in-the-moment approach. I like to embrace the victories we’ve had as much as our failures because that’s all interesting to me. There’s no way we can scrub the slate clean but we try to make it fresh every time.

Perry Eaton writes for Boston.com. Perry Eaton talks on the radio with me from time to time. Today, he talked to me about what he’s been listening to and some upcoming shows and festivals worth checking out. Click here to read more. END_OF_DOCUMENT_TOKEN_TO_BE_REPLACED

In some ways, Palehound has always had a home in Boston. END_OF_DOCUMENT_TOKEN_TO_BE_REPLACED

Kal Marks is the kind of band that sneaks up on you. Whether you’re experiencing them at some basement show in Allston, or in an opening set for Pile at Great Scott, you may not see them coming, but they’ll immediately click. The combination of heavy sludgy riffs and lead singer Carl Shane’s unique crooning bowls you over. It’s dark and it’s compelling, but most importantly, it’s really earnest. END_OF_DOCUMENT_TOKEN_TO_BE_REPLACED

It’s not very often that some of the most talented performers in Boston are set to grace the same stage in a single night. This Sunday marks the 1 year anniversary of Mind Spray, a local hip-hop open mic and showcase series devised by promotion and booking company The Brain Trust. END_OF_DOCUMENT_TOKEN_TO_BE_REPLACED

There’s been a lot written about Street Dogs evicting a group of neo-Nazis from the pit at their House of Blues, Anaheim show on St. Patrick’s Day. You don’t need to read any of it. Just listen to front man Mike McColgan tell the story. He talks about joining his old band, Dropkick Murphys, on stage in Boston last week, too. END_OF_DOCUMENT_TOKEN_TO_BE_REPLACED

It’s not her best. END_OF_DOCUMENT_TOKEN_TO_BE_REPLACED

When in Nashville, do as the locals do. Since relocating to Tennessee a few months ago, this seems to have been Steven Tyler of Aerosmith’s approach after announcing in an October Twitter Q&A session that he intended to record a country album, an endeavor he’s well in the process of completing. END_OF_DOCUMENT_TOKEN_TO_BE_REPLACED

“I’m Shipping Up To Boston” just turned ten years old. Boston.com’s Matt Juul put this piece together on the history and significance of the Dropkick Murphys song, then joined me in studio to talk about it. END_OF_DOCUMENT_TOKEN_TO_BE_REPLACED

Boston is a city known for it’s Irish heritage, and it’s celebration of it. Two main traditions have held strong in Boston: the St. Patrick’s Day Breakfast and subsequent Parade. But I argue there is a third now: seeing the Dropkick Murphys at the House of Blues during their multi-night March Residency. END_OF_DOCUMENT_TOKEN_TO_BE_REPLACED

Sure, you might see a punk show on Monday and a chillwave band on Thursday and so on, but usually you favor one sound over another because you’re a busy bee and time is honey. It’s been the same for years, and the Prefab Messiahs can vouch. END_OF_DOCUMENT_TOKEN_TO_BE_REPLACED