Guy Fieri Is in Boston, A Whole Different Kind of ‘Flavortown’ 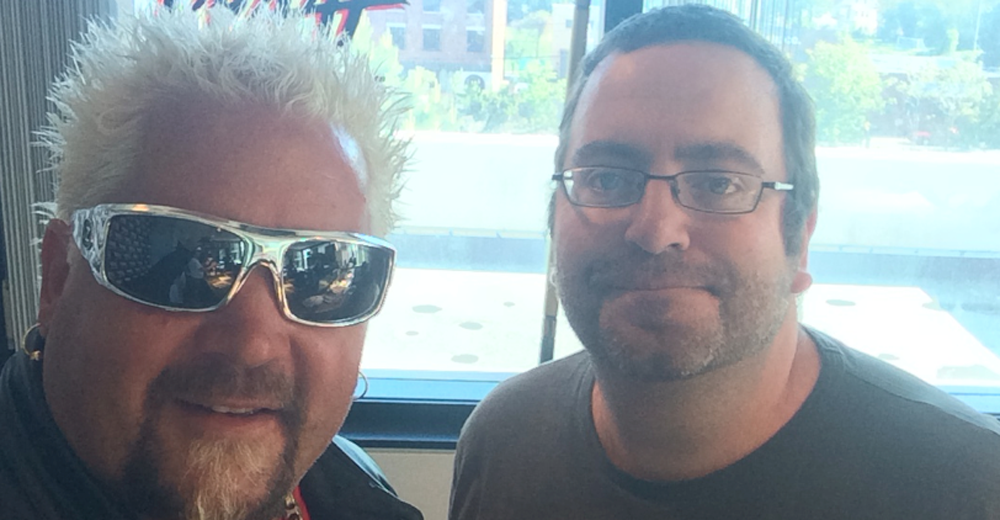 Looking for something “kickin” to do this weekend?

Be on the lookout for Guy Fieri, the slang-using, frosted-tipped, Food Network star who loves shoveling junk food down his gullet. Fieri, who was recently lambasted by the New York Times for his gimmicky Times Square restaurant, will be in town this weekend, hitting up greasy spoons around the Boston area to film his hit show “Diners, Drive-Ins and Dives.”

Fieri, who is often spotted wearing sunglasses upside down on the back of his head, short sleeve button-down shirts, and most likely those Reef sandals with the bottle openers in the heel (the latter not confirmed, just assumed), was already expected in town for the “Celebrity Chef Tailgate” in Hyannis Port on Saturday as part of a Tom Brady-hosted fundraiser for the nonprofit Best Buddies. Late yesterday, however, this cryptic tweet made its way to Fieri’s feed.

#DDD is rollin into beantown and man-o-man we have some spots! #boston

In addition, the celebrity chef tweeted out a picture this morning (seen above) seen with WAAF morning show personality Greg Hill.

Now, Zagat, feeding off of tips from social media, has some educated guesses as to where Fieri, known for catch-phrases like “Steam rollin’ to Flavortown!,” might be headed. Some of the locations being thrown around are Blunch in the South End, Deep Ellum and Lone Star in Allston, and Saus near Faneuil Hall.

Who knows? Maybe Fieri will dig Boston so much that he’ll include some Boston-themed dishes on his next restaurant’s menu. I could totally go for a some “Boston Chee-Party 5 Cheese Nachos,” a plate of “Charles River Extra Dirty Gravy Fries,” some “Fenway Frankly Quite Bad For You Triple Chili Cheese Dogs,” or even some “Slum’ville Dillionaire Fried Pickle Poppers” (for those unaware, they would obviously be fried Grillo’s Pickles served with a buffalo aioli).