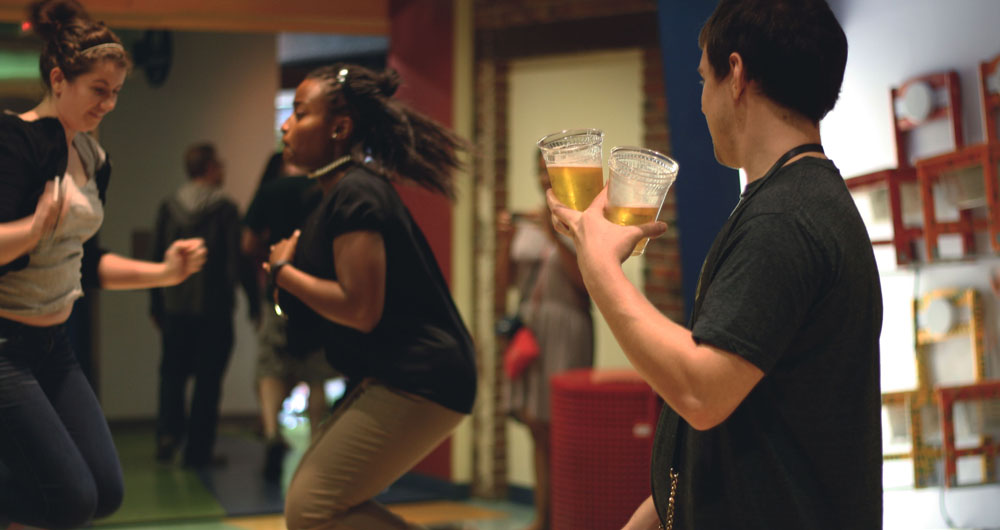 How did you play when you were a child? Maybe you were one of the athletic kids, racing the other kids across the asphalt and inventing new games. Maybe you were curious and enterprising, concocting experiments with the condiments in your fridge.  Maybe you spent those endless days getting lost in a box of crayons, or in the pages of a comic book. No matter how we chose to play as tykes, the pure joy we felt in doing so is something most of us continue to chase well into our adult lives. It never gets easier to let go of our everyday burdens and enjoy a simple game — in fact, it only seems to get harder year by year.

But you know what helps? A giant light-up moon that you can spin with your hands.

The Boston Children’s Museum first instituted its now wildly popular Adult’s Night last March, offering full access to all of the harborside museum’s many interactive exhibits along with a DJ, cash bar, and luxurious buffet. Since its inception, the event, the fifth of which was Wednesday, has only grown in popularity, with attendance exceeding 1300 people that evening.

To walk through the museum with a brimming cup of summer sangria (delicious, by the way) feels, at first, like a bit of a contradiction — the brightly colored walls, massive climbable structures, and learning-focused activities scattered through the museums are a far cry from the usual bar setting — but as the inhibitions go down, the fun rises.

“I’m curious about what’s going to happen a few hours from now,” Jennifer Mau, a Starbucks manager and marketer for Cambridge brewery Slumbrew said while settling into a petite plastic tree with an ‘adult sno-cone’ (a hard-liquor-and-ice concoction sold at the event for six dollars). “There’s already a spill downstairs.”

Indeed, activities like hula-hooping and double dutch are significantly more difficult with a drink in one’s hand, but as the night wore on, it became clear that the fun wasn’t in the drinking, but in the playtime. Professionals and parents romp freely — blowing huge soap  bubbles into the air in the Bubble Room, wheeling around carpeted floors on rolling dollies, playing pretend dinner in the Infant Room with plastic food. Engineers and architects play among blocks, creating sophisticated structures with total innocence. In the Kid Power exhibit, designed to teach youngsters to use their bodies effectively, crowds gathered to watch as groups of four or five hopped, skipped, and jumped to avoid a dot of red light chasing them around an electric game court.  Often, the red dot passed under an errant foot and exploded into a flower of purple, white, and green.

The museum’s brand new My Sky exhibit, debuted last Saturday, encourages kids, simply, to look up. Here, the piece de resistance is a low and darkened dome with a to-scale model of the moon inside, intended to inform children of how the moon appears to wax and wane based on the light of the sun. Due to the space’s natural, ahem, romantic qualities, this part of the museum is monitored by a gracious docent on Adult Night. “We don’t usually need to with the kids. It is a hook-up spot.”said the attendant, giggling. “But it’s not so fun to explain to the kids in the morning why it smells like Sam Adams in here.”

Finding one’s ‘inner child’ is a trope used to a point of cliche, but how often, really, do we get a chance to try? Too often that little boy or girl is lost in the fog, quietly informing our daily decisions but never rising to the surface. Maybe finding that child isn’t so difficult with a beer and a ball pit, after all — we need only to find the right playground.

END_OF_DOCUMENT_TOKEN_TO_BE_REPLACED

Enter to win a pair of tickets to attend The Hess Collection Seminar and Dinner as part of Boston Wine Festival 2018 at the Boston Harbor Hotel on Wednesday, March 14th. END_OF_DOCUMENT_TOKEN_TO_BE_REPLACED

I referred to it as the “best kept secret” in Boston arts for the holidays. END_OF_DOCUMENT_TOKEN_TO_BE_REPLACED

Boston’s arts scene shines at this time of year. END_OF_DOCUMENT_TOKEN_TO_BE_REPLACED

It’s so much more than a holiday show. END_OF_DOCUMENT_TOKEN_TO_BE_REPLACED

Rock for a cause this holiday season. END_OF_DOCUMENT_TOKEN_TO_BE_REPLACED

Get out and see a show this holiday season, and save some money when you do. END_OF_DOCUMENT_TOKEN_TO_BE_REPLACED

You can help give the gift of music to kids in need this holiday season. END_OF_DOCUMENT_TOKEN_TO_BE_REPLACED

Be honest: when’s the last time you attended a Gala? END_OF_DOCUMENT_TOKEN_TO_BE_REPLACED

The October staple returns on the 21st. END_OF_DOCUMENT_TOKEN_TO_BE_REPLACED