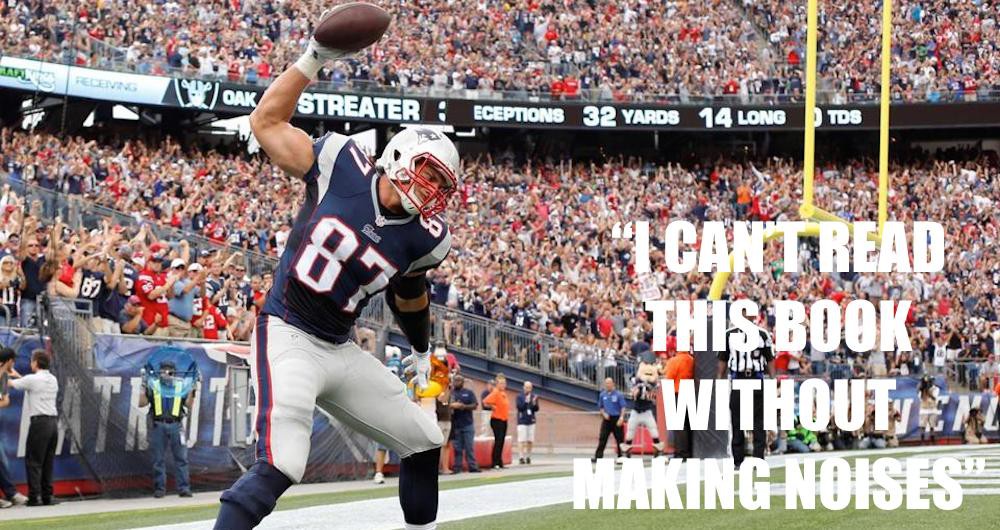 As you may have heard, the wildly successful Rob Gronkowski erotica (henceforth known as Gronkerotica) title “A Gronking to Remember” by Lacey Noonan had its Kindle version removed from Amazon over a third-party copyright claim, allegedly because the cover features an image of Gronk wearing an MHK patch, worn in memory of Patriots owner Robert Kraft’s late wife Myra.

If you’re still looking for an amusing read about Gronkerotica without paying for it, however, the Amazon reviews of “A Gronking to Remember” are almost as entertaining as the book itself. Here’s a few of our favorites. (Click the photos to enlarge.)

Most of the reviews were *extremely* positive

“As Good as Good Dino-Erotica”

“BTW I would have given it 5 stars if there had been pictures.”

“Sure to one day join the ranks of Homer’s ‘Iliad,’ Dante’s ‘Inferno,’ and Dostoyevsky’s ‘Crime and Punishment'”

“…exactly the sort of sweaty Gronk-pounded jizzfest that all Pats fans can be proud of.”

“Hemingway, Tolkien… well you can add Noonan to that list.”

“I can’t read this book without making noises that make my mother wonder who is in the closet with me.”

“I haven’t been this wet since hurricane Irene.”

One guy got a very different book than he was expecting.

Some didn’t appreciate the joke…

But this review probably sums up the average reaction of any hardcore Pats fan.

RELATED:
Amazon Ends Sales of Gronk Erotica Due to Cover Objections
‘I Control the Boners:’ A Q&A With Gronk Erotica Author Lacey Noonan
Rob Gronkowski Erotica Is Here and It’s… Something

Enter to win a pair of tickets to attend The Hess Collection Seminar and Dinner as part of Boston Wine Festival 2018 at the Boston Harbor Hotel on Wednesday, March 14th. END_OF_DOCUMENT_TOKEN_TO_BE_REPLACED

The Black and Gold continue their run tonight at TD Garden. END_OF_DOCUMENT_TOKEN_TO_BE_REPLACED

Who will make the Class of 2018? END_OF_DOCUMENT_TOKEN_TO_BE_REPLACED

It’s been awhile since we talked Black and Gold. END_OF_DOCUMENT_TOKEN_TO_BE_REPLACED

You’re going to wish you were in the Northern Alps. END_OF_DOCUMENT_TOKEN_TO_BE_REPLACED