Getting the Blood Pumping with B/SPOKE Spinning Studio 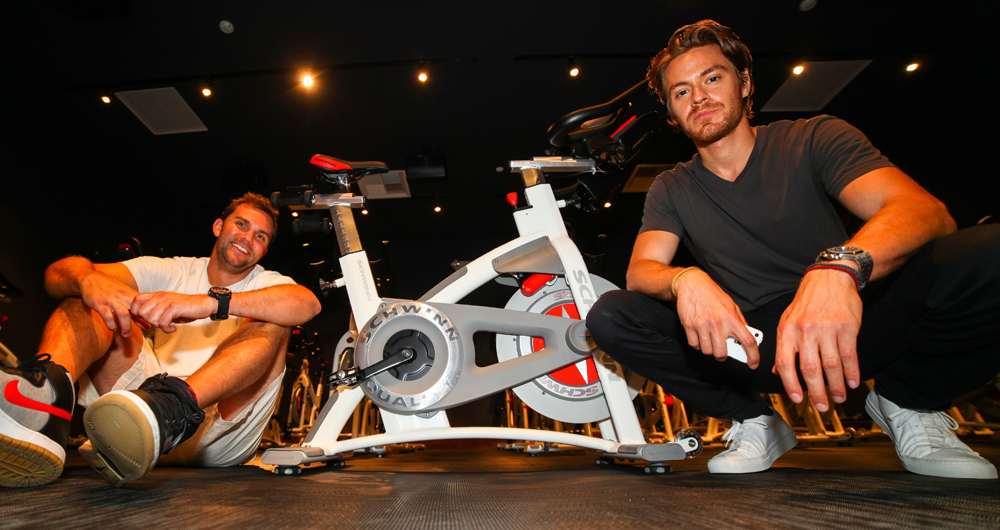 Cycling…My butt already hates me before I even decide to get on the bike. Being a lady of the millennial generation though, it’s my unwritten duty to put myself through pain and near exhaustion for the sake of being trendy.

We’ve all see the resurgence of cycling classes with the development of Soulcycle and Flywheel in the past decade, but what exactly is the draw I ask? You sit on a bike that goes nowhere, inside a dark room, and a very tiny man or woman yells at you. My idea of cycling is through episodes of “True Blood,” sitting my ass on my couch, in a well lit room, with the beautiful characters yelling – at each other. It’s simple: cycling just isn’t for me, until I met these guys…

Ryan Olsen and Mark Partin, two young thirty somethings who are the proud owners of their new cycling studio – B/SPOKE. These two buddies developed the idea over the course of three years while working the grind in finance down in NYC after college. One hip surgery and two torn ligaments later, both guys needed to find a lower impact workout to keep themselves healthy. Cue cycling. Their love for spinning developed even more so when the two found themselves talking day-in and day-out about how if they could open their own studio they would. Cue Hurricane Sandy. The pair decided if they were going to go out on their own, this would be the best case scenario – get out while there’s no office to go to! Kidding, but they were both financially fortunate enough to be able to quit their day jobs and try making a go at their lifestyle fitness dreams.

Co-owner Mark Partin jokes, “They say the first rule in startups is don’t quit your day job, but looking back on it, it would’ve been impossible to do both.”

A year in the making, B/SPOKE is an esthetically beautiful studio, giving fancy gyms like LA Sports Club and Equinox a run for their money. The urban financial district location brings all walks of life on foot traffic, but also brings a sense of community back to the area full of large companies and corporations. The small studio is equipped with electronic day lockers, 6 showers, private changing areas, and bouchey amenities from Aesop. Did I mention, ladies, they not only have hairdryers, but straighteners and hair elastics too? #NailedIt.

So yes, they have a fancy studio that is LA chic, but what else – what sets them apart? Corporate packages, student discounts, and gilt buys are just some of the ways Mark and Ryan feel they can draw people in, but the real kicker is the class itself. The classes are designed with music in mind, keeping it effective, yet fun. Dubstep, rock, commercial house, hip-hop, you name it they’ll play it. Both owners stress the importance of having great music inside their studio, especially since the basis for most of their classes is ‘riding to the beat.’The boys even put together a top ten (in no particular order because they’re all sweet) of their favorite beats at B/SPOKE:

The boys have been putting their own pedals to the metal trying to open the place over the past year, but they truly believe in B/SPOKE’s fitness lifestyle brand even offering an interactive website ‘Journal’ dedicated to providing tips on nutrition, things to do, and local bio’s around the Boston scene. My opinion on cycling might’ve been swayed by their free water/towel/bike shoe combo, but it really was won over when co-owner Ryan Olsen said, “Even if you’re not a professional biker you can still go with it and come out at the end being like ‘wow, I had fun, I think I’ll try it again.’”And you know what – he was right! If you’re a cycling enthusiast, gym rat looking to break the mold, or just an average joe-ann (or joe, gender friendly here); hop on a bike at B/SPOKE and just ride it out. Your butt won’t be disappointed.

Check out their fitness lifestyle website for additional tips and articles

END_OF_DOCUMENT_TOKEN_TO_BE_REPLACED

Picture this: you’re hungover. Or just getting over the flu. Or jet-lagged. Or just plain run down and exhausted. Now, picture this: a certified nurse comes to your home and helps you through it. That’s the concept behind The I.V. Doc–now available in Boston. Dr. Joseph A. Russo and his team joined me in studio with all the details. END_OF_DOCUMENT_TOKEN_TO_BE_REPLACED

Ryan Brister, area director of Life Time Fitness was in studio with me this morning to talk about what Life Time is all about and to preview their new Chestnut Hill location, coming in Spring 2017. END_OF_DOCUMENT_TOKEN_TO_BE_REPLACED

Oliver Taylor of Vitamin 1 Performance Drink joined me in studio to talk about how they’re filling the void of a healthy and nutritious sports drink, which tastes good. What a concept, right? Listen! END_OF_DOCUMENT_TOKEN_TO_BE_REPLACED

Sim Ahluwalia is a personal trainer and precision nutrition coach at Equinox. She’s also a chef in training, and was nice enough to bring some goodies from Flour Bakery so we could nosh while we talked about cooking and eating healthy. END_OF_DOCUMENT_TOKEN_TO_BE_REPLACED

The majority of rock climbing gyms in Boston have popped up within the past ten years and there is no going back. With the popularity of indoor rock climbing on the continued rise, we think it’s time to check out what all the buzz is about. Here are five to visit that can all be reached by Boston’s public transportation. END_OF_DOCUMENT_TOKEN_TO_BE_REPLACED

Maple syrup has always been a staple of our friends up North. But now its sweetness may be put to a different use. One Vermont-based company called Slopeside Syrup hopes to make it a resource for athletes.
END_OF_DOCUMENT_TOKEN_TO_BE_REPLACED

Modern Pilates owner Lisa Johnson was in studio with me and Henry earlier, talking about shoveling snow the right way and not throwing your back out. Listen! END_OF_DOCUMENT_TOKEN_TO_BE_REPLACED