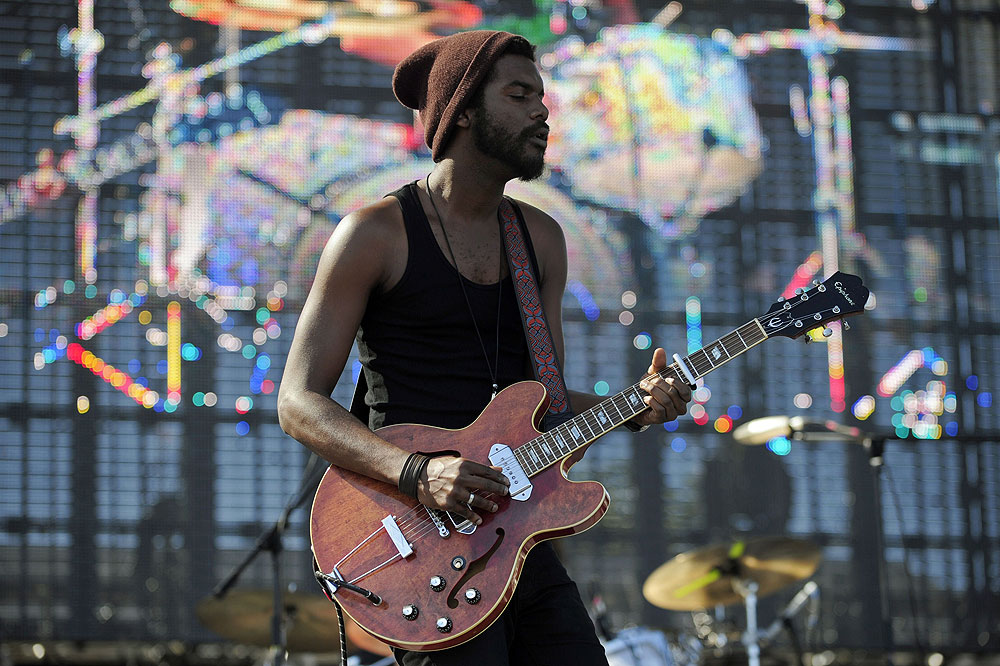 Gary Clark Jr.’s visceral tumult and gritty guitar arrangements on 2011’s “Bright Lights” EP served as a precursor for what he was “destined to be”: the next Stevie Ray Vaughan. But now that he’s hanging with The Stones and soon to be touring with Kings of Leon, is he something else entirely? Or just another lovable artist changing as he catapults to superstardom? Before his two-night run at Royale Sunday and Monday, we take a closer took.

“Bright Lights” led to a microscope being placed on the Austin, Texas, blues scene, as well as a revival in a genre of music that had been outshined by greasy made-for-radio synths and auto-tune. Clark was a beacon of hope when he declared that, in spite of all of the Top 40 bullshit that dominated the airwaves, “Things Are Changin’.” Except our indelible protagonist encountered something that no one really expected him to overcome: high-profile groupies.

The Rolling Stones were so impressed with him that they felt the need to garner Clark for their live shows. Alicia Keys couldn’t wait to get him alone in the studio. And it was only a matter of time before President Barack Obama came a’ knocking. To top it off, the release of Clark’s full-length debut “Blak and Blu” last fall was met with slight dismay from critics. Gone was our patron saint of rootsy authenticity—and in its place? A musician who flashes fluorescent R&B (“You Saved Me”), flirts with the artful bipolarity of hip-hop (“The Life”), and lusts after arena-rock bombast (“Glitter Ain’t Gold”). All that hard work and yearning for larger audiences paid off in a big way: Clark is hitting the road with Kings of Leon next year (stopping at TD Garden on Feb. 28). But now who exactly is Gary Clark Jr., fans must ask? Rock’s ragged and well-timed vanguard or the next Lenny Kravitz?

The answer is definitely not Kravitz. “Blak and Blu” might be full of experimentation, but for Clark, that was the only way to properly honor his range of influences. And unlike Kravitz, he is less focused on ruffling feathers by pushing the androgynous, visual aesthetic of music and more focused on the process of making it. More times than not at one of his shows, Clark modestly dons all black, barely speaks to the crowd, and sears into his guitar chord by chord for an unforgettable performance (I have personally seen him three times).

And sure, he wants to expand his fanbase and covets larger venues—but name an artist that doesn’t. Remember, Keys and The Stones sought out his talents, not the other way around. But perhaps the most important reason that Gary Clark Jr. could never be the next Lenny Kravitz is because he is not a rock star—he is a musician—even if that is making him a rock star in the process.

Enter to win tickets to see Trio Da Kali at The Villa Victoria Center of the Arts (Newton, MA) on April 10th. END_OF_DOCUMENT_TOKEN_TO_BE_REPLACED

END_OF_DOCUMENT_TOKEN_TO_BE_REPLACED

Enter to win tickets to Rhye at The Paradise on February 28th. END_OF_DOCUMENT_TOKEN_TO_BE_REPLACED

Her new album has been pushed back, but we have Kimbra’s new single for you. END_OF_DOCUMENT_TOKEN_TO_BE_REPLACED

The folk duo returns with a new record this week. END_OF_DOCUMENT_TOKEN_TO_BE_REPLACED

Now that we’re done looking back at 2017, let’s look ahead at 2018. END_OF_DOCUMENT_TOKEN_TO_BE_REPLACED

Our first Song of the Week for 2018. END_OF_DOCUMENT_TOKEN_TO_BE_REPLACED

In a year when so many things were off, the music was right on. END_OF_DOCUMENT_TOKEN_TO_BE_REPLACED