While it may seem counterintuitive to the folks that are unpacking their sweaters and loading up on pumpkin spice, surf season is about to begin. Yes, surfing is generally associated with carefree summers, babes in bikinis and buff dudes getting bronze, but this is New England, and the surf gods don’t operate on the same schedule as the stereotypes. Summer in New England is relatively waveless, with the surf getting higher as the weather gets colder and the beaches get less crowded.

As such this is also the start of surf-contest season and this Saturday the third installment of Battle of the Beach comes to Narragansett, Rhode Island,  which bills itself as the “biggest surf contest in Southern New England”. One of this year’s sponsors is Boston’s own John “Chino” Wong, surfboard shaper and owner of the Chinatown-based Chino Surfboards and it seemed like the perfect excuse to visit Wong’s shop and get a first hand look at the epicenter of the city’s surf scene. 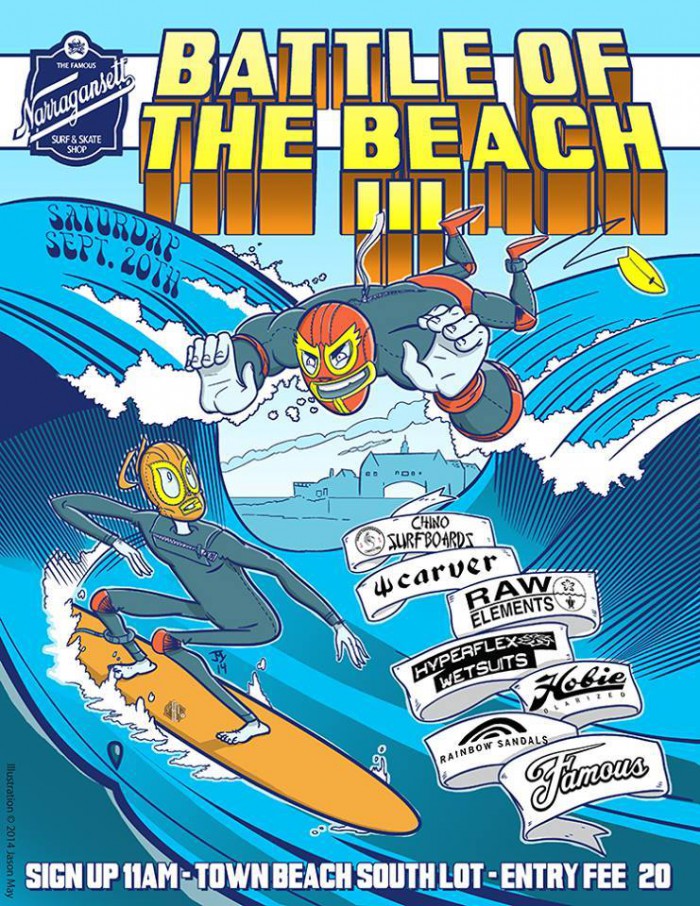 “Be prepared for all the comments saying ‘why you trying to blow up our sport?'”

Wong’s chuckle punctuates the fact that this criticism is inevitable.  The sport of surfing is at an all-time peak in popularity, with pro-level contests receiving unprecedented levels of sponsorship from mainstream sponsors like Swatch and Samsung. On the local level, the combination of affordable mass-produced boards — “pop outs” in surf lingo — and advances in wetsuit technology have meant that that the waves around New England are more crowded than ever.  And while the sport’s increasing popularity is great for folks like Wong and the shops that have sprung up from Rhode Island to Maine, it’s not so great for those seeking solitude among the waves.

“My logo, the Chinese says ‘manufactured in America’ because there’s this whole thing about Asian made pop-outs, how they just [flood] the market,” Wong tells BDCwire as we stand amongst the piles of finished boards and uncut foam blanks in his second-floor workshop. “There has to be meaning behind everything I do. It’s fun.”

Wong, a Dedham native, began repairing and shaping surfboards in an apartment behind legendary East Boston pizza joint Santarpio’s over ten years ago. A self-taught shaper, Wong was motivated by the dearth of local surf shops at the time, their unpredictable hours and the months-long turnover on repairs. Since then, Wong has become a staple of the scrappy, enthusiastic New England surf scene, sponsoring contests like this weeks Battle of the Beach and collaborating on board designs with local artists like Dave Tree, whose ‘Fukishima Fish’ was featured in the September issue of Eastern Surf Magazine.

“I think the people that surf in New England have a desire more than other places because we don’t have [surf] all the time,we can’t just go out and get it,” says Wong. “It’s a lot of work, so the people that are going to do it take it very seriously.”

The Battle Battle of The Beach III takes place Saturday September 20 at Town Beach, 39 Boston Neck Rd, Narragansett, RI, United States from 11 am to 5 pm. Sign up fee is $20.

END_OF_DOCUMENT_TOKEN_TO_BE_REPLACED

Enter to win a pair of tickets to attend The Hess Collection Seminar and Dinner as part of Boston Wine Festival 2018 at the Boston Harbor Hotel on Wednesday, March 14th. END_OF_DOCUMENT_TOKEN_TO_BE_REPLACED

The Black and Gold continue their run tonight at TD Garden. END_OF_DOCUMENT_TOKEN_TO_BE_REPLACED

Who will make the Class of 2018? END_OF_DOCUMENT_TOKEN_TO_BE_REPLACED

It’s been awhile since we talked Black and Gold. END_OF_DOCUMENT_TOKEN_TO_BE_REPLACED

You’re going to wish you were in the Northern Alps. END_OF_DOCUMENT_TOKEN_TO_BE_REPLACED