Wimp’s Day Out: A Firsthand Experience at Worcester’s Rock and Shock Horror Convention

I’ve never been one for horror films. There’s something about blood and guts, ghosts and vampires and Michael Myers that have me shielding eyes from a movie screen. I’d choose “Hannah and Her Sisters” to “Hannibal” any day of the week. Call me a wimp, I’ll be the first to agree with you.

There are people who look to gore for a rush of dopamine, who delight in the portrayal of a killer waiting to strike. These kind of humans are a unique breed of baffling fanatics, and frankly, are strange and foreign to me. So when I was invited along to Rock and Shock, New England’s largest horror and music convention, I couldn’t say no. Like Robert Graysmith to a Zodiac crazy, I needed to know what made the horror-obsessed tick.

The convention was staged in Worcester’s DCU Center. Aside from the occasional big-name concert, the venue primarily plays home to the Worcester Sharks, a minor league hockey team and serious source of townie pride. Once Rock and Shock 2014 opened it’s doors, sports fans were quickly outnumbered by the freaks and geeks of horror film fandom who’d made their way to central Mass in tripp pants and full-blown costume. 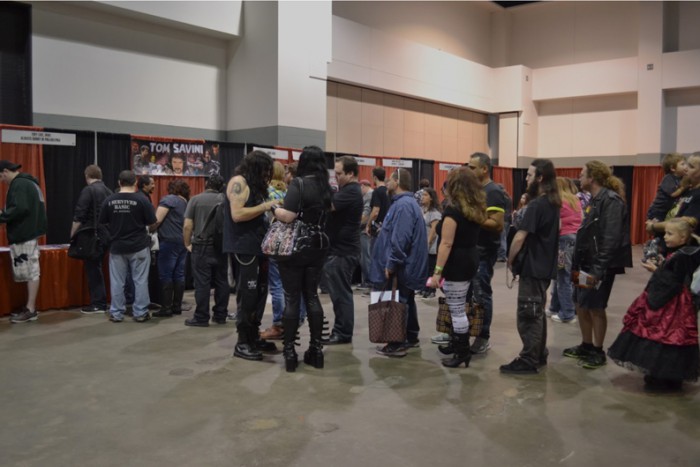 The most terrifying part of Rock and Shock was it’s price. $25 didn’t buy you much, just entry into a general area of activity, vendors and C-list celebrities. Despite its place in a giant venue, Rock and Shock itself was pretty small. Just fifteen minutes inside and I seemed to have gotten the rundown of the convention’s happenings, hauntings and snack bar. The grand total of shock seemed to take up a professionally sized basketball court. Despite gaining a sense of my surroundings pretty quickly, ticket holders remained mysterious as I sauntered by in brightly colored clothing.

There’s certainly been a boom in festival culture of the last few years, and Rock and Shock plays into that. Along with the opportunity for fans to meet their favorite horror stars, directors, writers during the day, at night the convention holds shows next door at Worcester’s Palladium. This year, Gwar took the stage at nightfall to maintain their self-described “‘undisputed masters of “shock rock’” title. Fitting, no?

Oddly enough, there were factors of Rock and Shock that carried over to any sort of large, celebratory gathering. Get a group of people together to bond over their favorite stuff, and you’re sure to see similarities– even if in the form of consumerism. Aside from plain movie memorabilia, Rock and Shock vendors had all sorts of terrifying goodies for sale. Take Deadly Grounds coffee, bad art, and one taxidermied chick in an adorable bowler hat, for example. 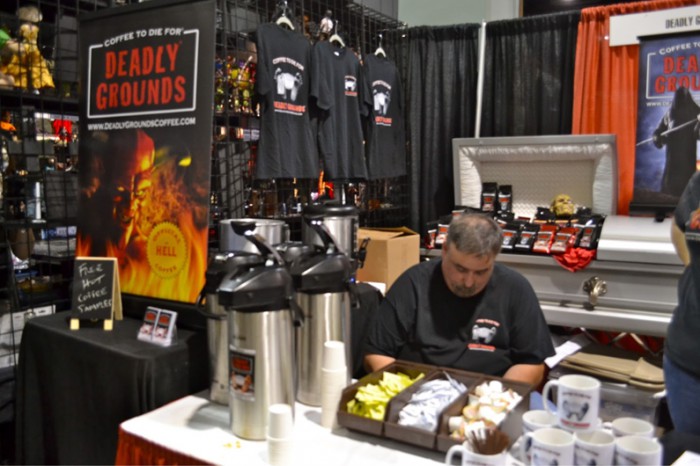 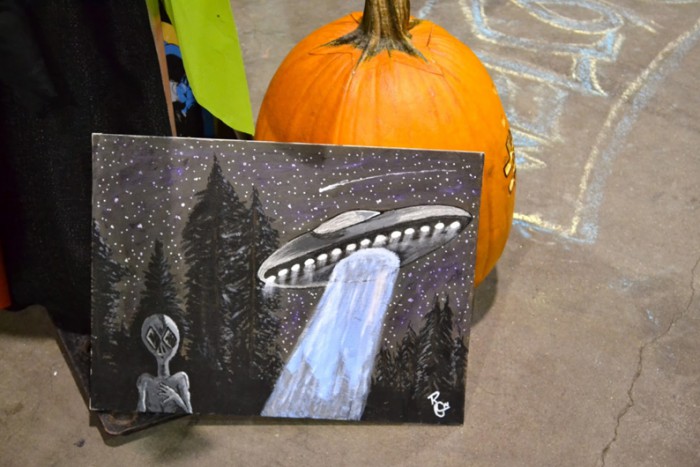 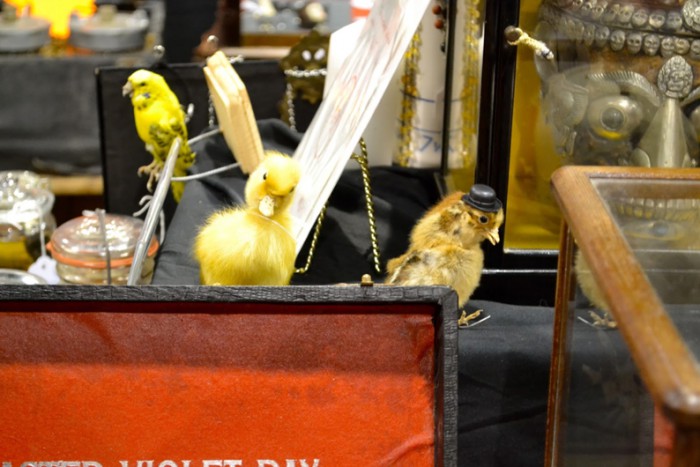 Aside from stuff to throw in a shopping bag, Rock and Shock offered a cornucopia of other buyable, somewhat less conventional stuff. For an affordable $150, showgoers could stop by one of the many tattoo artists who’d set up shop in Worcester for the weekend. Not that ticket holders had much skin to spare—body ink was as prominent to Rock and Shock as Hawaiian shirts are to Jimmy Buffett’s closet. I spotted enough Gothic angel wings this weekend to fly roundtrip to Gathering of the Juggalos. Now, about that hatchetman tattoo.

Many trekked to Rock and Shock for famous faces. Or at least, kind of famous ones. The most noteworthy name of the convention came in Brad Dourif, an actor known as Billy Bibbit in “One Flew Over the Cuckoo’s Nest,” and more particularly this weekend, the voice of Chucky in the “Child’s Play” franchise. As a kid, Chucky was without a doubt my biggest fear. I remember watching the scene of him killing a man in a car parked outside a toy factory, suffocating the man with saran wrap from behind the driver’s headrest. I still can’t look at leftovers without my heart skipping a beat. While at the convention, I snapped a memory of a Chucky fan. She was extremely friendly, and quick to allow this photo after her friend agreed to hold her purse. 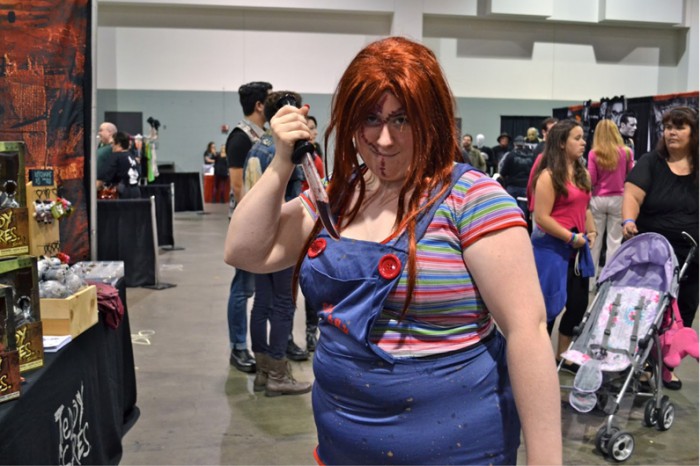 Other big names to Rock and Shock included Roddy Pipper (gum chewin’, kilt wearin’ ass kicker) John Ratzenberger (“Cheers,” the voice of Hamm in “Toy Story”) and Doyle Wolfgang von Frankenstein, painted-faced guitarist of The Misfits. Whether or not his devilock got the best of him Saturday remains unclear, but it’s certain that at one point Mr. von Frankenstein looked up from his phone long enough to tell a nearby fan to “f*ck off.” But only after giving him the finger. 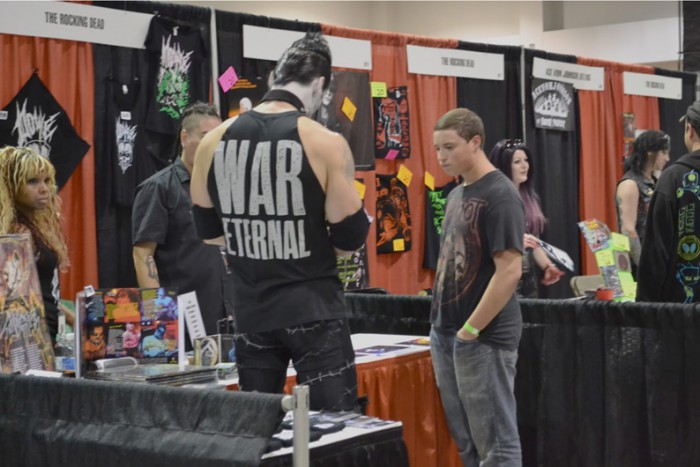 Taking photos with the semi-famous was a big commodity this weekend. But like the vintage comics and antique coffins for sale, these photos came with a price. A photo with John Ratzenberger? Forty dollars for you, sir. Want to #selfie Tom Savini? That’s $20 for the five double-taps you’re sure to get on Instagram, not including the “like” from your mom. Showgoers on a tighter budget could still seize a photo opp. Opposite horror’s one hit wonders was a booth devoted to creepy creatures. $5 bought you time holding a bunny, tarantula or squirmy alligator- just long enough to snap a pic! My friend Peewee opted time with the ‘gator. Below is the man who owned said alligator, rockin’ the snake a la “Slave 4 U” Britney Spears. 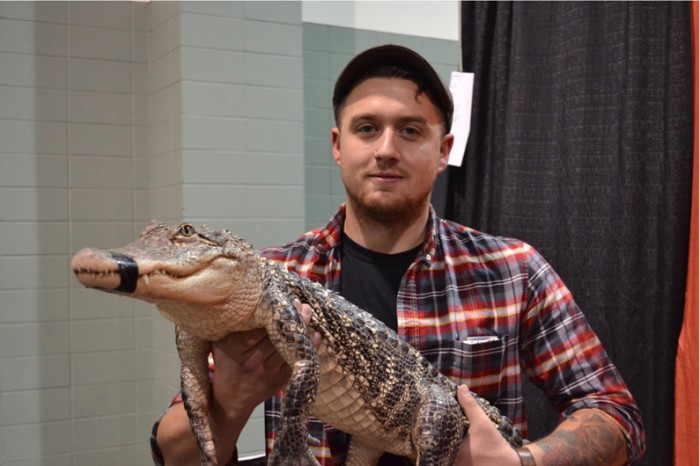 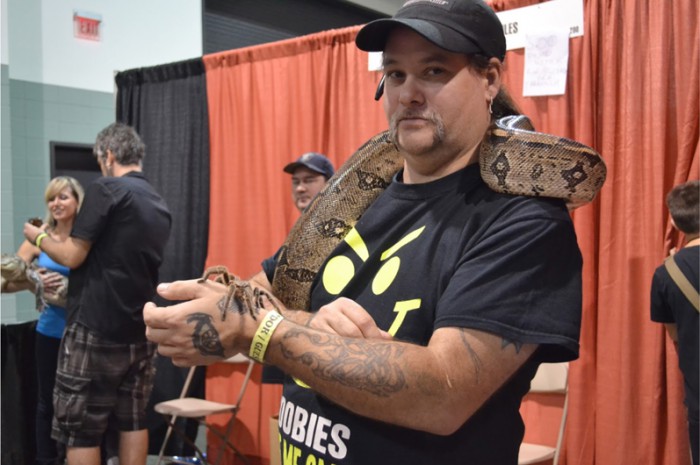 Aside from the more extreme side of animal kingdom, another furry friend ran rampant at this year’s Rock and Shock. Horror fans may be stereotyped cryptics, but jeez, do these people have a soft spot for dogs. A soft, zany spot that is. Upon first entering the convention, I spotted Juno the Chihuahua patrolling Rock and Shock in her tiny car, spreading the word of animal rights and abuse awareness. And what good is a pet without its accessories? Hard and Heavy clothing was also present at the convention, a line made exclusively for pooches with the gut busting tagline, “How metal is your dog?” 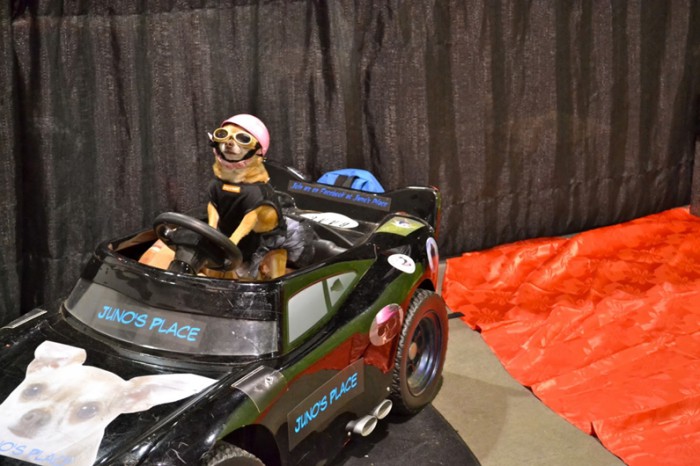 The three hours I spent at Rock and Shock felt a lot more like seven. Whether it was the face-paint fumes that got to me, or the constant threat of a “Thriller” flash mob, by five o’clock I was feeling slightly faint. But still, at the end of it all, I had to ask: What’s the deal with horror fans? I’d spent more time this weekend with these terrifying film buffs than all of my years combined, and what did I have to show for it? Something not horrific at all. The folks at this weekend’s Rock and Shock were incredibly kind. And though many of them were scary as hell on the basis of costumes, face masks and preference for gore, they were quick to offer a warm smile, friendly conversation, and even a bit of Halloween candy. A sense of community was clear at the convention, and you really have to respect that. While I may not be into “Nightmare on Elm Street” or “Halloween,” I applaud the ones able to quote every line, down to the blood curdling screams.

Click here to see where we’ll be the rest of the season! END_OF_DOCUMENT_TOKEN_TO_BE_REPLACED

END_OF_DOCUMENT_TOKEN_TO_BE_REPLACED

Enter to win a pair of tickets to attend The Hess Collection Seminar and Dinner as part of Boston Wine Festival 2018 at the Boston Harbor Hotel on Wednesday, March 14th. END_OF_DOCUMENT_TOKEN_TO_BE_REPLACED

We kicked off our 2018 season on the coldest day EVER. END_OF_DOCUMENT_TOKEN_TO_BE_REPLACED

I referred to it as the “best kept secret” in Boston arts for the holidays. END_OF_DOCUMENT_TOKEN_TO_BE_REPLACED

Boston’s arts scene shines at this time of year. END_OF_DOCUMENT_TOKEN_TO_BE_REPLACED

It’s so much more than a holiday show. END_OF_DOCUMENT_TOKEN_TO_BE_REPLACED

Rock for a cause this holiday season. END_OF_DOCUMENT_TOKEN_TO_BE_REPLACED

Get out and see a show this holiday season, and save some money when you do. END_OF_DOCUMENT_TOKEN_TO_BE_REPLACED