#FreeTheNipple Movement Grows, Both in Boston and Beyond 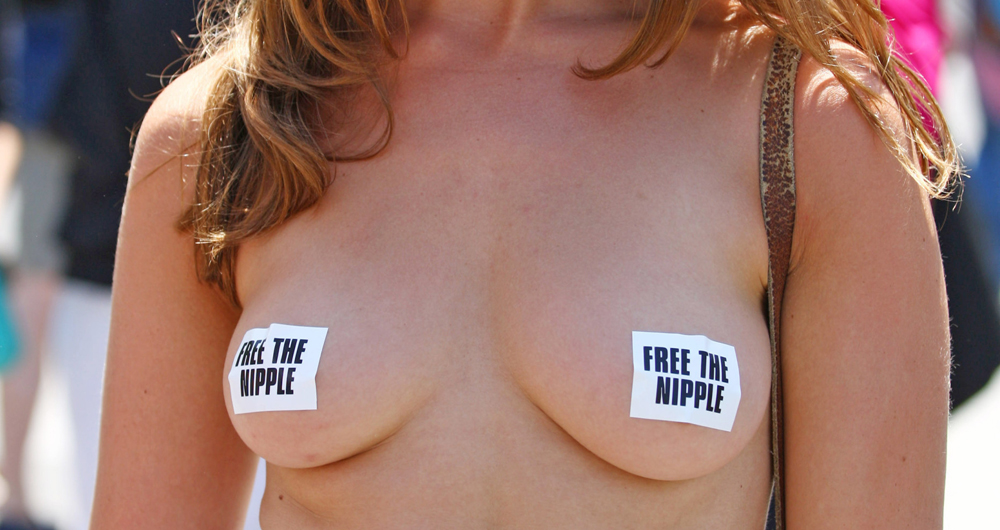 If female breasts make you uncomfortable, then you may soon be told to piss off. Free The Nipple is a movement that started a few years ago, but has recently exploded with a viral #FreeTheNipple campaign and endorsements by celebrities including Miley Cyrus and Lena Dunham. The movement calls for the desexualization of the female nipple for a number of reasons, including rights to breastfeed in public, the banning of female breasts on social media sites, and the unlawful arrests of topless women in places where they are allowed to be topless. Boston University Women’s Studies Professor Christina Michaud explained why this movement is so important.

“I’ve breastfed for the last six years, over two kids, in every sort of public place imaginable, without a cover. I’m glad that the law protects breastfeeding women from charges of quote-unquote indecency in many states, but I can’t believe it doesn’t in all states. Even beyond breastfeeding, I just can’t understand public sentiment on this issue. One night this summer my kids were watching some college-aged guys playing basketball, shirts against skins. My son actually said that his sister couldn’t be on the skins team, someday (she was two, so at the moment she wasn’t even thinking about playing yet) because ‘girls can’t take their shirts off.’ I told him he was wrong, that girls can take their shirts off if they want to. Someday when my kids older and playing pick-up games, I hope they both can be on either team, shirts or skins.”

Carrie Bennett, an author, poet, and writing professor who resides in Somerville explained the movement’s importance from an artistic perspective, noting “The artists who inspire me the most–Marina Abramovic, Claudia Rankine, Fanny Howe–are able to connect politics with their art. I believe it’s important for an artist to turn her gaze on society, illuminating its faultlines, its failures, its stubborn falterings. The continued sexualization of the female form is one of those tenacious problems in our culture. I see the Free the Nipple movement as illuminating this historical gender discrepancy.”

Michaud and Bennett aren’t the only Bostonians who support the cause. Boston writer Samantha Allen traveled to New York to support a Free The Nipple parade and had this to say in a feature in The Daily Beast: “Breast are very empowering. They feed life. It doesn’t seem right to minimize that or make it something dirty. When you make it this hugely sexual thing, that’s when you make it a shameful thing. That’s when you need to cover it up. It takes away my choice about what I want to do with my breasts.”

When 42 men were arrested for exposing their nipples in Atlantic City in 1935, the male population protested in outrage and the male topless ban was removed in 1936. Yet, in 2014, it is still illegal for a woman to be topless in 35 states with consequences including $2,500 in fines and three years of jail.

I simply don’t understand the extreme opposition to Free The Nipple. The controversy around this cause exemplifies exactly why noise must be made – for the social equality of all genders. Clearly people need to stop acting like boobs and start appreciating them.

Enter to win a pair of tickets to attend The Hess Collection Seminar and Dinner as part of Boston Wine Festival 2018 at the Boston Harbor Hotel on Wednesday, March 14th. END_OF_DOCUMENT_TOKEN_TO_BE_REPLACED

Artists for Humanity Co-founder Jason Talbot and Major Gifts Director Emily Smaldon were in studio this morning with Mallory Bazinet, Event Manager for GrandTen Distilling. Jason and Mallory talked about The Contemporaries, their upcoming event to launch a new patron group for young professionals. Click here to join them on Thursday, August 17! END_OF_DOCUMENT_TOKEN_TO_BE_REPLACED

Chef David Vargas, Owner of Vida Cantina in Portsmouth, NH is hosting a one-time-only event that he created to raise money for foundations supporting immigrant workers and their families. He joined me in studio with Chef Daniel Bojorquez of La Brasa in Somerville to talk about Si Se Puede – Yes We Can Dinner on Sunday, April 2. END_OF_DOCUMENT_TOKEN_TO_BE_REPLACED

Aida Villarreal-Licona is the Events Coordinator for SoWa Boston’s Art & Design District. She was in today to talk about their holiday shopping event this Thursday December 15 from 4-8 p.m. at 450 Harrison Avenue. A great opportunity to help local artists and get some holiday shopping done! END_OF_DOCUMENT_TOKEN_TO_BE_REPLACED

Natalie Lemle was in to talk about ArtLifting, a program that aids homeless and disabled artists. Currently, 72 artists in 11 states are receiving 55% of all profits from your purchase of their artwork and photography. Click “more” to hear my chat with Natalie and to see work from one of the artists. END_OF_DOCUMENT_TOKEN_TO_BE_REPLACED

Boston band Funeral Advantage is Tyler Kershaw. And Tyler Kershaw had a fun childhood, so it seems. END_OF_DOCUMENT_TOKEN_TO_BE_REPLACED

Perry put me on to daephne and the album blew my mind. END_OF_DOCUMENT_TOKEN_TO_BE_REPLACED

It’s no secret that Bostonians like to show their Patriot pride with tattoos. Who can forget the awesome guy who got that sweet Bill Belichick arm tattoo? Or the less-awesome guy who showed off his full-head Tom Brady helmet tattoo in his mugshot? END_OF_DOCUMENT_TOKEN_TO_BE_REPLACED