This Free T Day, I Tried to Cost the MBTA as Much Money as Possible

Last Friday, the MBTA rewarded customers who suffered through a winter’s worth of cancellations and delays with a free day of service across all platforms. Coupled with T-related giveaways from local organizations and a 15% discount on all passes for the month of May, it was the MBTA’s grand gesture to build up some goodwill.

But what is that $1.4 million number based on? Is the assumption that the average rider will use the T the same amount? If so, I intended to smash that assumption to smithereens.

So for all of Friday, I rode every mode of MBTA transportation possible while cashing in on as many Free Day freebies as I could, all with the single-minded goal of costing the MBTA as much hypothetical money as possible. This is my story.

8:45 – Already running late, I head to Alewife for my first free doughnut from Dunkin’ Donuts, making sure to get on and off at Davis first to maximize hypothetical spending.

“We are very grateful to the participating businesses for providing these discounts at no cost to the T or its customers,” said MBTA spokesman Joe Pesaturo in an email when I asked whether the MBTA was compensating any of the participating organizations. Regardless, I’m counting the value of every doughnut toward my Free Fare Day haul.

The line is short, and I’m headed back downtown before I know it. It’s strange seeing the gates permanently open. 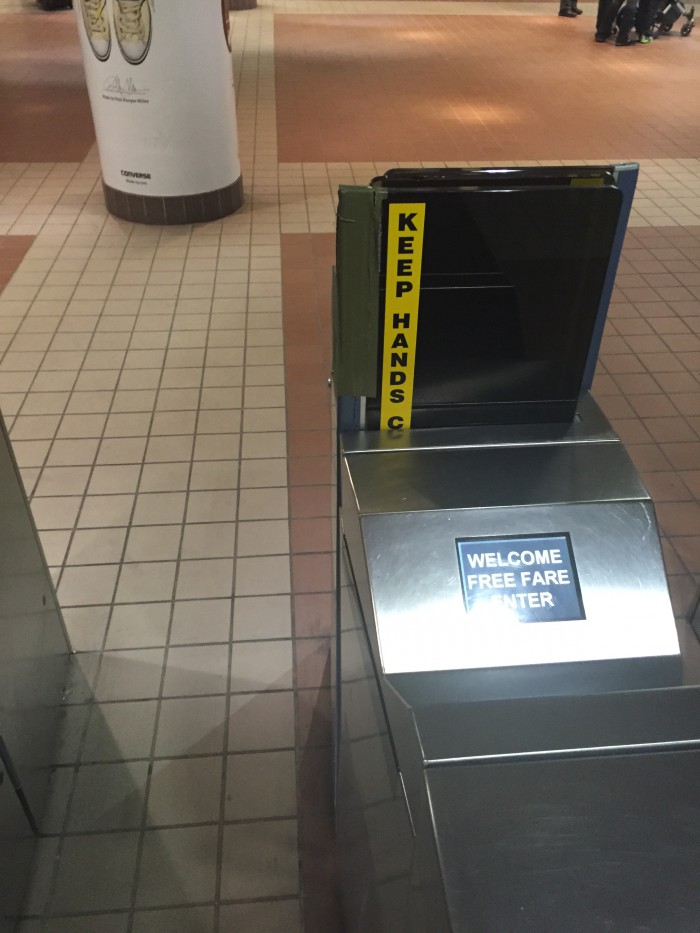 9:15 – Back on the train at Porter, I run into a friend of mine named Chris on his way to a meeting at MassDOT. “Let ‘em know I’m wasting all of their money and there’s nothing they can do about it,” I tell him. His unconvincing laugh suggests my request will go unfulfilled.

9:20 – Second doughnut of the day at Harvard. Line is surprisingly short. Does no one else share my unflagging love for free stuff?

9:30 – For a Friday just a bit past rush hour, the train is surprisingly full. Nearby, a man consults a printed copy of the T’s giveaways, a brother in arms in the battle to milk every red cent from the MBTA.

9:40 — I begin to look around the car at the various advertisements. One for Harvard Extension school and its “electrifying” curriculum catches my eye. The static of the model’s hair would normally suggest a mad scientist vibe, but something in her eyes says “I know I look crazy, but I’m having the time of my life!”

I decided her name is Patricia, and she will be my spiritual guide for the rest of the journey. 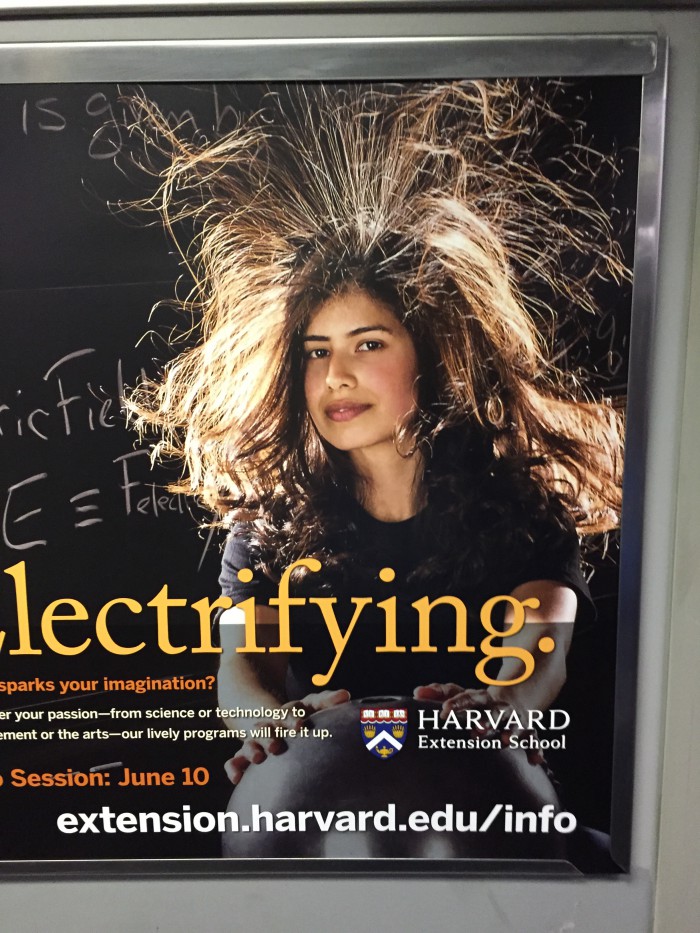 9:45 – After getting on and off at Central and Kendall on principle, I decide to head straight to South Station for my third doughnut, though I’m already too late for the free coffee from McDonald’s, unfortunately. With no real plan in mind, I hear “The 9:55 train to Providence is now boarding on track four” crackle over the intercom. That’s all the motivation I need. Rhode Island here I come!

10:10 – The wireless is middling, but good enough to quickly check in with coworkers:

“Nope, this was all his idea for some reason.”

“How many trips down the Green Line does it take to lose one’s mind?” The support is overwhelming.

11:10 – As I rush off the train to find a bathroom, I quickly glance at the departure board. The MBTA sections list one train at 11:15 and one at 12:27. Pushed by a desire to charge my laptop and eat something other than doughnuts, I decide to spend an hour in Providence. 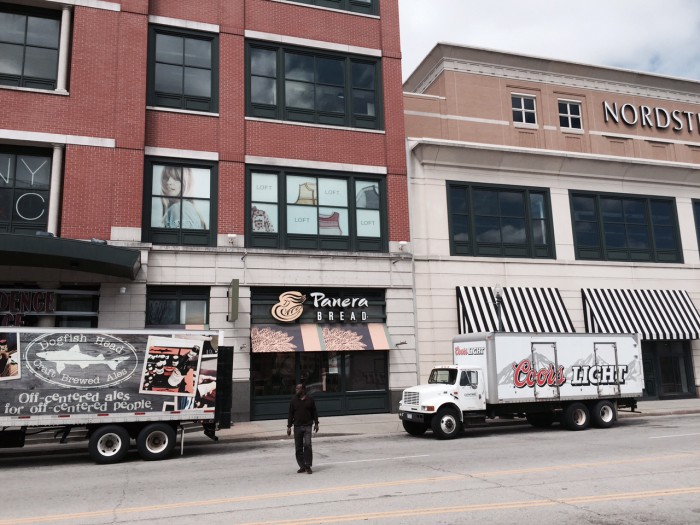 11:40 – As I scroll through the MBTA schedule planning my next move, I realize I’ve made a mistake. The 12:27 train was an outbound one, heading deeper into Rhode Island toward parts unknown. I’ve unwittingly committed myself to two-and-a-half hours in the Renaissance City.

12:15 – “Customers are limited to 30 minutes of Wi-fi on non-mobile devices” the automated pop-up scolds, knowing full well my half sandwich and cup of water aren’t nearly enough to be worthy of a seat at Panera.

12:40 – As roving gangs of stroller Moms surround me, bumping my table aggressively, I high-tail it, determined to find something of worth in my next hour downtown.

1:20 – But the building’s graffiti sums up my feelings well. 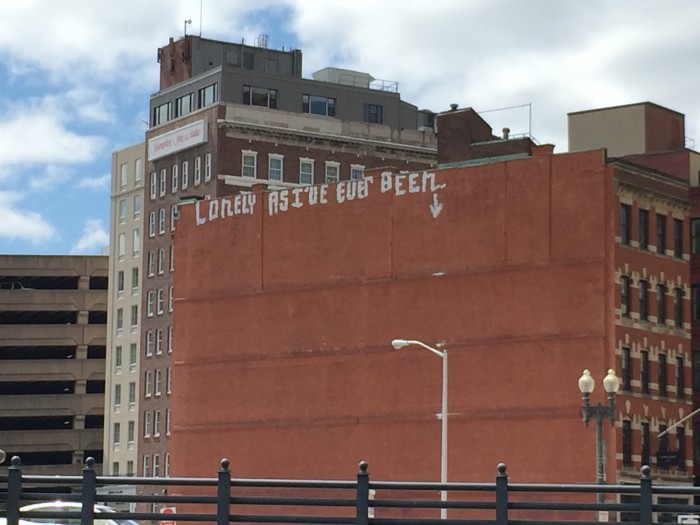 1:45 – I finally begin the ride back to Boston, with hopes of breaking $100 fading fast. I won’t be back to South Station until 3, and I’ve only spent a little over $35. It’s time to take drastic action.

3:00 – After arriving at South Station, I plot a complex series of line changes to go as little distance as possible. At Downtown Crossing, I move to the Orange Line, ride it to State, transfer to the Blue Line, and ride it to the Aquarium, making sure to get in and out each time. All so I can hit the best freebie of the day: a free ride on the Rose Kennedy Greenway carousel (a $3 value) by showing my Charlie Card.

3:15 – I’m not sure the guy running the carousel believes that I’m a reporter, but he gives me a ticket anyway. Parents shepherding their children in line regard me with an appropriate mixture of amusement and concern.

3:20 – Resolving not to look at the children around me, I instead concentrate on capturing the perfect #carouselfie 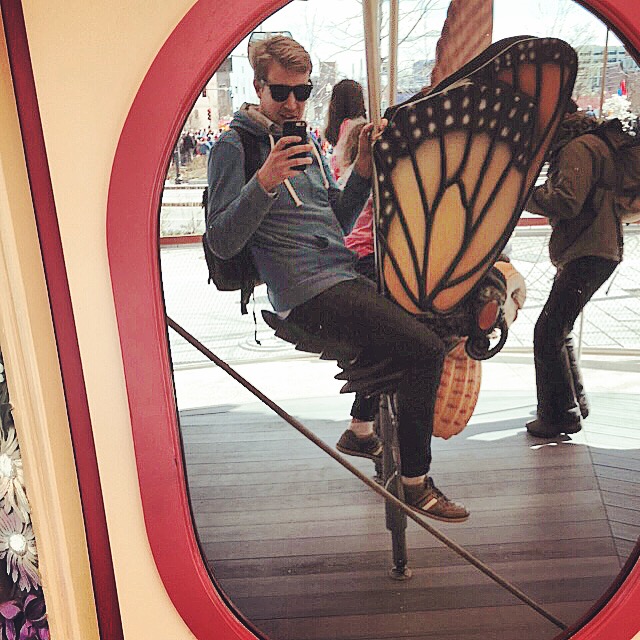 3:30 – After escaping the throngs of children, I head for the MBTA Harbor Ferry, the most underused and unknown branch of the public transit system. The man tying and untying the boat confirms that Free Fare Day has been exponentially busier than the average day on the ferry.

3:45 – I’ve hit the mother lode. Not only is the view of the city beautiful, but a ferry ride from Boston to Hull or Hingham costs $8.50 one way, and a Commuter Ferry trip from Hingham to Logan Airport is $17 hypothetical dollars. I may make my $100 goal yet. 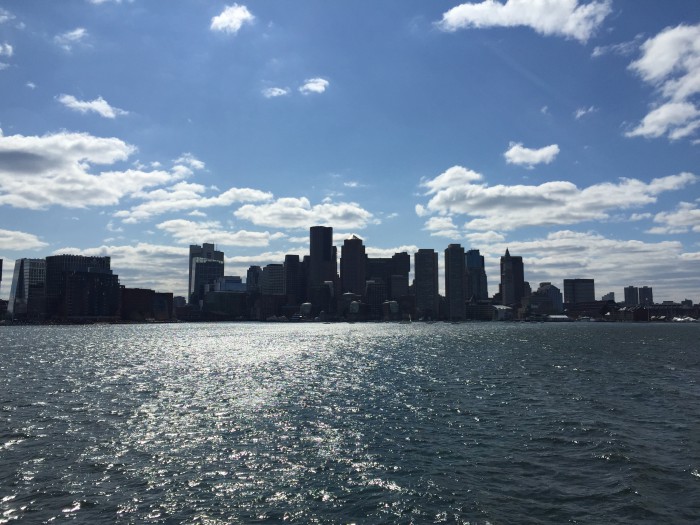 4:30 – After hopping off the ferry in Hingham, I walk to shore, turn on my heel, and hop on the ferry to Logan Airport.

Three moms with six kids between them trundle in next to me. “We gonna do Bud Light?” one asks. Yes, the MBTA ferry sells beer. The group settles on Coronas. “I’ve got it,” says the mom with a newborn strapped to the front of her, as she makes her way to the MBTA bar.

“Cheers to Free Ride Friday!” they shout, as one of the three-year-olds tries to fish his mom’s lime out of the beer. If I wasn’t so gosh-darn professional I’d grab a tall boy of my own and toast right along with them.

5:10 – I get off at the Logan Ferry Stop, and for the first time since Providence, I don’t know where to go. There’s supposed to be a shuttle bus that comes to the ferry outpost every 20 minutes, but the first one pinwheels around the pickup circle in a flash, ignoring the half a dozen of us foolish enough to take the Commuter Ferry to the airport. So I begin to walk from the shores of East Boston to Logan.

5:30 – After walking through several blocks occupied only by gigantic Mack trucks, I make it to the rental car return center and catch a shuttle through the airport and to the Blue Line stop. I know the easiest way to accomplish my $100 goal is to head to the Green Line, but I’ve got other ideas. I want to see Wonderland.

6:00 – I hop on and off at several Blue Line stops, but the trip to Wonderland is still pretty quick. You know that John Mayer song “Your Body Is A Wonderland”? The body Mayer refers to is my body, and the Wonderland is Revere’s Wonderland. My first view upon leaving the stop is this. 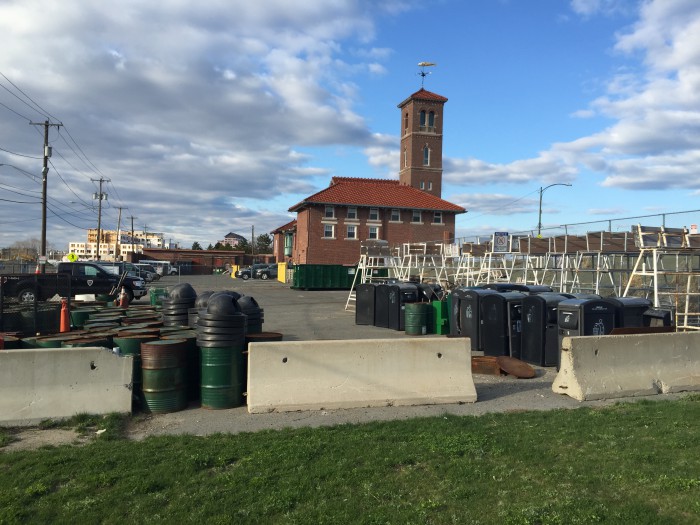 Seconds later I’ve crossed the street and arrived at the sandy beaches of Revere, where two steps from the stairway I run into this.

This is a sign. The T Gods are angry with me. What I’m doing is unnatural, an affront to Free Fare Day. I rush back to the train, determined never to set foot in Wonderland again.

6:30 – I am defeated. Tired, hungry, and unnerved by the seagull corpse of Wonderland, I ride the Blue Line in silence, refusing to get on and off at every stop.

6:45 — I finally make it back to the Red Line, and happily collapse into a seat. In walks a teenage couple conjoined at the hip, leg, mouth, and every other body part. As the T shimmies and shakes up the hill toward Charles/MGH, they rocket into me, refusing to let go of each other in order to grab a pole. The male portion of the T Amoeba solves their stability problem by leaning his butt on the pole directly in front of my face. The T Gods watch from the control center on high and laugh.

6:55 – At Harvard, the Amoeba departs, allowing me to glimpse the train beyond the denim-clad hindquarters I’d been subjected to. Directly across from me, I glimpse Patricia one final time.

“Tell me it was worth it, my dear,” I beg with pleading eyes. “Tell me my journey was not in vain.” She says nothing. Her eyes, the same ones that urged me on hours earlier, are now dead. I’ve reached the end.

Enter to win a pair of tickets to attend The Hess Collection Seminar and Dinner as part of Boston Wine Festival 2018 at the Boston Harbor Hotel on Wednesday, March 14th. END_OF_DOCUMENT_TOKEN_TO_BE_REPLACED

Boston band Funeral Advantage is Tyler Kershaw. And Tyler Kershaw had a fun childhood, so it seems. END_OF_DOCUMENT_TOKEN_TO_BE_REPLACED

Perry put me on to daephne and the album blew my mind. END_OF_DOCUMENT_TOKEN_TO_BE_REPLACED

END_OF_DOCUMENT_TOKEN_TO_BE_REPLACED

I’m in my mid-twenties, and I’ve been working as a substitute teacher for the last couple years (I joined Teach for America right out of college). I know some of the girls in classes I teach have crushes on me — high schoolers aren’t very subtle — but I brush it off, because I’m not an idiot. Last week, however, I got a disturbing email from a girl in the English class I subbed for. Pictures were attached. You get the gist. What do I do about this situation? I obviously haven’t responded, but I’m afraid she might go Lifetime-movie on me. END_OF_DOCUMENT_TOKEN_TO_BE_REPLACED