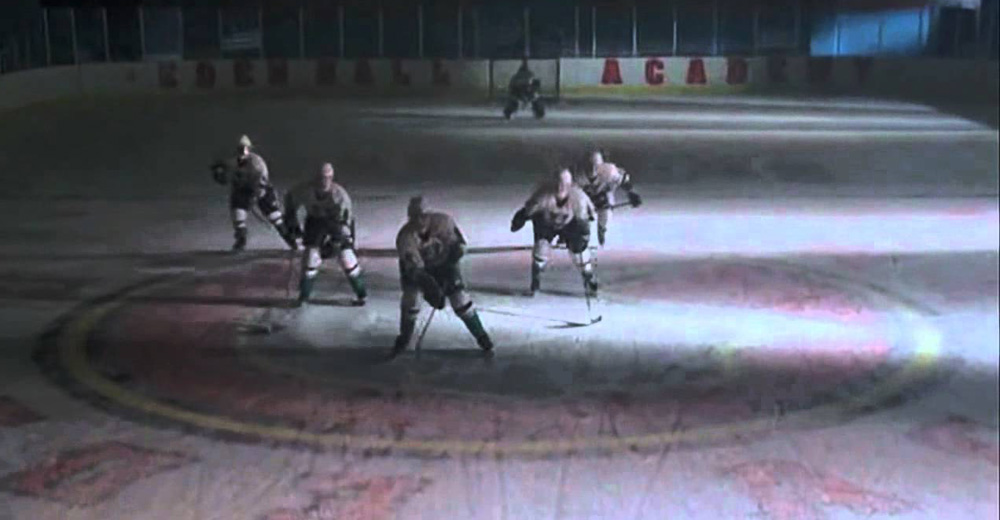 Yesterday, in his C’mon Ref blog for TSN, former NHL head referee Kerry Fraser put to rest an argument that has plagued ’90s movie fanboys for nearly 22 years. In the 1992 generational cornerstone “The Mighty Ducks,” was the Flying V a legal move?

The maneuver, where in the Ducks players mimic a V-shaped flying pattern and pass the puck between their skates, is meant to confuse and bewilder an opponent, thus allowing them to blow a shot past the keeper. In the film, it works, and the Mighty Ducks go on to beat the Hawks in the Minnesota peewee hockey championship. However, hockey experts have long accused the zero-to-hero team of being offsides as they entered the zone – which would negate the goal, their comeback, the victory, and the joy of countless childhoods.

However, in a benchmark decision for all nostalgic sports movies, Fraser ruled on the side of District 5, stating that the play was indeed onside as the team crossed into the offensive zone. Fraser, who presided over more than 1,900 regular season and 260 Stanley Cup playoff games before hanging ’em up to pursue punditry, had this to say:

Thorough indeed. Fraser also delves deeper into the calls of the game to discuss Fulton Reed’s hit on the backcheck, the in-movie ref’s ruling that only a player on the ice can take the penalty shot, and even tying Goldberg to the net in practice. Though the C’mon Ref is typically devoted to weighing in on controversial calls during real-life hockey, one can only hope that Fraser will revisit this franchise to give the final word on whether the knucklepuck is legal or whether two minutes for roping was indeed the correct call in “D2: The Mighty Ducks.”

[S/t to Puckdaddy for the story.]

The Black and Gold continue their run tonight at TD Garden. END_OF_DOCUMENT_TOKEN_TO_BE_REPLACED

Who will make the Class of 2018? END_OF_DOCUMENT_TOKEN_TO_BE_REPLACED

It’s been awhile since we talked Black and Gold. END_OF_DOCUMENT_TOKEN_TO_BE_REPLACED

You’re going to wish you were in the Northern Alps. END_OF_DOCUMENT_TOKEN_TO_BE_REPLACED

END_OF_DOCUMENT_TOKEN_TO_BE_REPLACED

Bill might be “on to Tennessee,” but we’re not. END_OF_DOCUMENT_TOKEN_TO_BE_REPLACED