Flying Over Boston (on YouTube): 5 Best Boston Drone Videos on the Internet 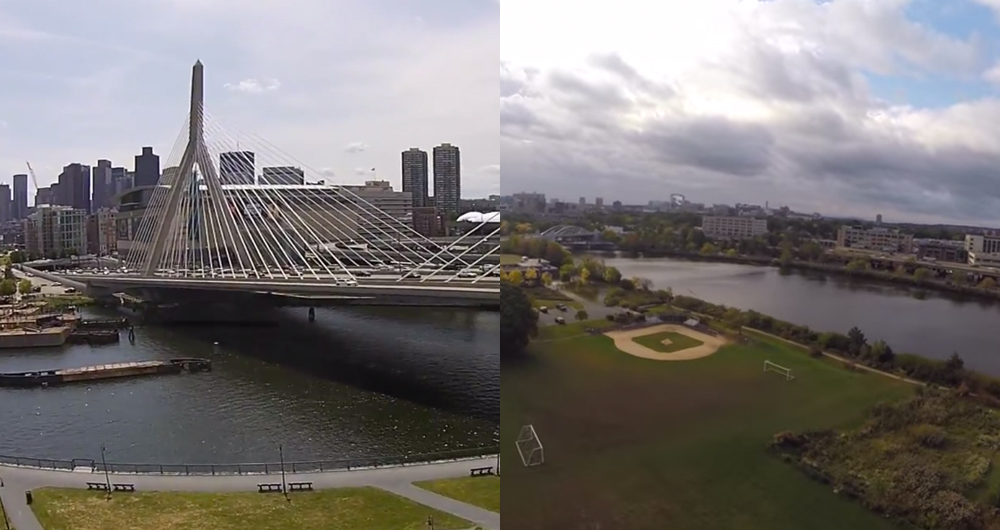 If you’ve ever wanted to see what it’s like to fly over the city of Boston, these drone videos can make your dream as close to a reality as you’re going to get. In captivating clips recored by drones flying over the city, viewers can finally experience what a bird sees when flying over places like Jamaica Plain, Beacon Hill, or Copley Square. We gathered some of the best ones that the Internet provides:

One obviously could not talk about the sights of Boston without including the many historical buildings and places that make up the city. Thus, our first pick, a tribute to Boston’s history, is a drone video of Acorn Street in Beacon Hill. Brick sidewalks and gaslight street lamps, symbols of Beacon Hill, can be seen as the drone travels down the street, flying away from an American flag flapping in the wind.
A view of Boston just wouldn’t make sense without seeing a little bit of traffic. In this video, a drone looks out over the Bunker Hill Bridge, which carries lanes for I-93 and Route 1. Upon first viewing the video and hearing Capital Cities’ “Safe and Sound” playing, we kind of shrugged and groaned. But for some strange reason, the song actually sounded better while watching the video.
Ignoring the cheesy rock music that plays in the background, this drone video is fun to watch because it flies over Copley Square, a popular Boston attraction that many of us have frequently visited. It’s super interesting to watch the drones look down on places you’ve probably walked around before. With images of Boston’s Old South Church and Back Bay, the video instantly captivates viewers who have visited these locations in real life.
Trouble arrives for this drone in the funniest video we could find. As the YouTube user explained in the video’s description, “On Oct 8th, I was flying my quadcopter at Magazine Beach Park in Cambridge, MA when a hawk decided he wasn’t too happy with my invasion of his airspace.” Don’t worry. The uploader explained that no animals were harmed in the making of this drone, so watch it and enjoy a good laugh.
Check out this video to soar over the Arnold Arboretum in Jamaica Plain. Forget the city for a while, because the video includes beautiful shots of the Arboretum that make you feel like you are lost in the middle-of-nowhere, or Western Massachusetts.