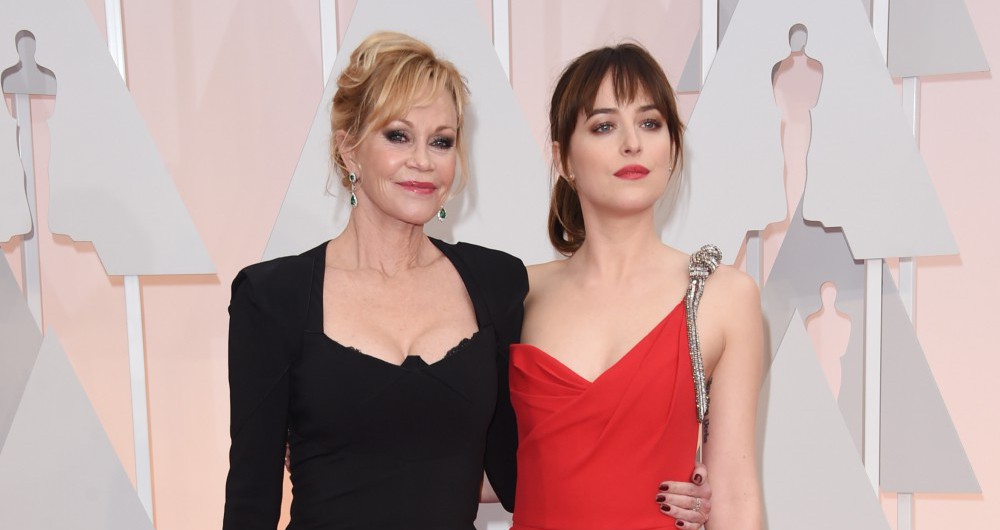 Moms are all over this year’s Oscars, but while Reese Witherspoon’s mom just texted her (though so adorably), Dakota Johnson’s mom Melanie Griffith joined her daughter on the red carpet. They showed us another side of mother-daughter realness when they argued on camera.

Just like when you went to a friend’s house in high school and stood silently by while her and her mom argued over her insane texting bill (how did we survive before unlimited?), the world was collectively uncomfortable watching Johnson and Griffith’s awkward mother-daughter moment.

Fifteen years ago, Griffith brought her daughter as her red-carpet date, but lots has changed since Johnson was 10 years old.

Dakota Johnson brought her mom, Melanie Griffith to the #Oscars… 15 years after her mom brought HER! pic.twitter.com/ITHCjiS2z7

There were a handful of people who didn’t know that the two were related.

Melanie Griffith is Dakota Johnson’s mom!? How did I not know this

oh my god I didn’t realize Dakota Johnson was the daughter of Melanie Griffith?!?!

But when Griffith was grilled about not seeing “50 Shades of Grey,” everyone agreed that was an awkward mother-daughter moment.

Are Melanie Griffith and Dakota Johnson trying to have an SNL sketch made about them? #mmmooooooommm#imstillupsetaboutthedivorce #Oscar2015

Lowlight of Red Carpet: Hostess pressing Melanie Griffith on why she wouldn’t watch her daughter, Dakota Johnson, in 50 Shades of Grey #yuck

I can’t blame Griffith for not wanting to see her daughter in BDSM-flick, but maybe they should have had that fight at home.

Golden Globe and Emmy nominee Benjamin Wallfisch is the composer responsible for the score of the hit movie IT. I talked to Ben about his approach to scoring the new version of this iconic story and his thoughts on film and music overall. Some very insightful commentary; listen in. END_OF_DOCUMENT_TOKEN_TO_BE_REPLACED

Rupert Gregson-Williams is an award-winning film composer. He just so happened to compose the score for this summer’s big blockbuster Wonder Woman. We talked about his beginnings in film scoring, film scores that move and inspire him and, of course, Wonder Woman. END_OF_DOCUMENT_TOKEN_TO_BE_REPLACED

Jeff Rapsis is a New England-based composer and performer. Lately, he’s been creating live musical scores for silent film screenings. I talked to him about his process and a few of his upcoming performances at The Capitol Theatre in Arlington and the Somerville Theatre. You can keep track of where else Jeff is scoring silent films here. END_OF_DOCUMENT_TOKEN_TO_BE_REPLACED

Planning on seeing Rogue One: A Star Wars Story when it opens this weekend? I joined Adam 12 to give you an idea of what to expect. But don’t worry, I didn’t give anything away. END_OF_DOCUMENT_TOKEN_TO_BE_REPLACED

Always a pleasure to have Boston.com’s Perry Eaton in studio for a chat. After we talked a bit about Pearl Jam at Fenway and Perry’s new podcast, he filled us in on Game of Thrones live and Narragansett’s new Bananagrams-themed brew. END_OF_DOCUMENT_TOKEN_TO_BE_REPLACED