Unless you’re the type of person who’s home at 3:30 p.m. on a weekday, you probably haven’t seen a live episode of “Family Feud” in a while. But this clip, in which Steve Harvey asks two women “If you could change one part of your husband’s body, what would it be?” has taken the Internet by storm because of one contestant’s brutally awkward answer.

With those two words, contestant Joyce cemented her 15 seconds of viral fame, much to the chagrin of her husband Pete.

“Family Feud” has been chugging along for years without much controversy, unless you’re the kind of person who gets upset that only 27 out of 100 people named the apple as their favorite fruit. But since Harvey was installed as host of the show in 2010, there’s been an overwhelming number of leading questions of the frankly sexual nature. A quick look at the official “Family Feud” YouTube channel shows the most popular videos all share a common theme.

It’s a foolproof formula. Harvey asks a question that just begs to be answered sexually, then acts scandalized when a contestant dares answer what everyone was thinking. There’s a reason this image macro existed even before yesterday’s show. 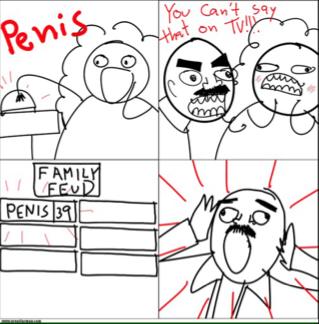 Aggravating as the formula may be, it’s working. Shortly after Harvey took over for John O’Hurley as host, ratings jumped 40%, from near-cancellation numbers to the fifth-most popular syndicated program. In a 2011 show of faith, “Family Feud” moved its taping from Los Angeles to Atlanta, where Harvey lives and hosts a radio show. And in 2014, Harvey won a Daytime Emmy Award for Outstanding Game Show Host.

So get used to more clips like this, because Steve Harvey and his sexually charged survey questions are making a 1970s game show relevant again.

A decade of Wreck The Halls. END_OF_DOCUMENT_TOKEN_TO_BE_REPLACED

Leah Wellbaum from Slothrust brought her trusty six-string to Studio B and turned in the first RadioBDC Session of 2017. Check out her three songs and her chat with Julie Kramer, recorded live on February 28, 2017. END_OF_DOCUMENT_TOKEN_TO_BE_REPLACED

This should never have happened. END_OF_DOCUMENT_TOKEN_TO_BE_REPLACED

I spend far too much time on Twitter. Here’s a handful of posts from last year that I found to be entertaining on one level or another. Enjoy. END_OF_DOCUMENT_TOKEN_TO_BE_REPLACED

Mike McColgan and Lenny Lashley of Street Dogs were in session on November 30, 2016 to play three songs and chat about their annual Wreck The Halls shows at Brighton Music Hall December 15-18. END_OF_DOCUMENT_TOKEN_TO_BE_REPLACED

Tegan and Sara stopped by for a chat before their House of Blues show on Halloween night. END_OF_DOCUMENT_TOKEN_TO_BE_REPLACED