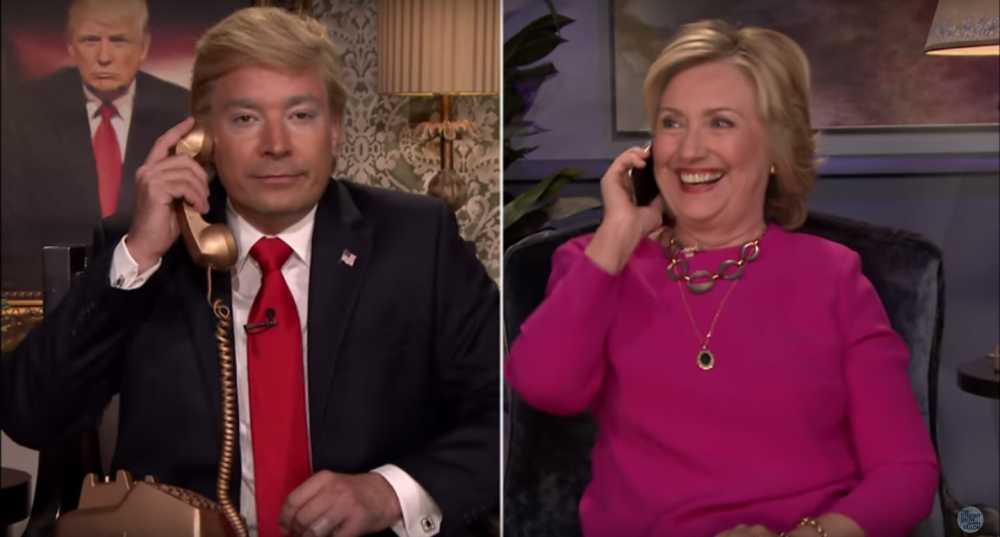 In a skit from last night’s The Tonight Show, Fallon emulated The Donald in order to give Hillary Clinton some not-so-sound campaign advice.

The skit preceded an interview of Clinton by Fallon wherein she cleared some things up, including her feelings about Trump, her main priorities as a president, and what the heck was in those e-mails.

It also included another impersonation of Trump, this time from Clinton herself.

Fairly accurate. She even let Fallon touch her hair, which is purportedly a favorite pastime of Trump’s.

And as good-humored as Clinton’s jabs were at Trump during the interview, they paled in comparison to Fallon’s version of the GOP frontrunner.

Don-ning a spray tan and a smarmy expression, the late-night talk show host was hauntingly good in the role.

He did an excellent job of tightly capturing Trump’s core traits, which either means Fallon has been paying really close attention to these debates or Trump is a pretty one-dimensional guy.

The advice Clinton got from “Trump” was, unfortunately, exactly what the real Trump would probably say to someone he was trying to help.

No word yet from Trump on what he thinks of Fallon’s impersonation, but keep an eye out on his Twitter. He tends to respond to these sorts of things. Just yesterday, he weighed in on Tom Brady’s support for this campaign.

In the meantime, watch the full clip in all its hilarious glory below: