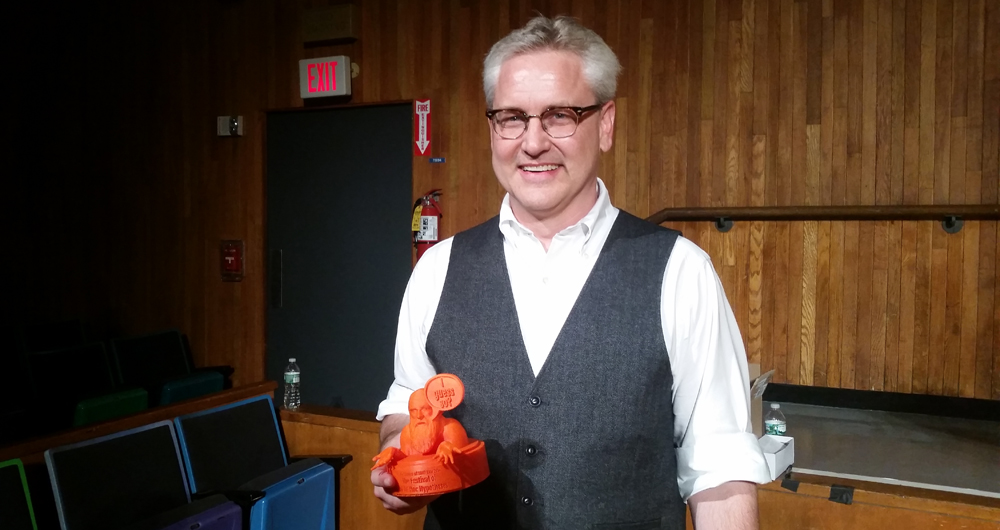 It turns out that the extra layer of fat found on the torsos of many middle-aged men is not just the result of poor diet, declining metabolism, or a sedentary lifestyle. Instead, the “donut” or “spare tire” is actually an emergency flotation device, and the result of thousands of years of evolution.

According to Michael Anderson, the middle-aged man who won this year’s BAHfest on Sunday at MIT’s Kresge Auditorium, early humans transitioning from a hunter-gather society to an agriculture settled on flood plains of rivers. He argues that, before boats were widely accessible, the patriarch of each family served as a flotation device for the rest of the family to use to “ride out” the periodic floods.

He supports his theory, officially called “The Abdominal Torus/Spare Tire: Adaptive Speciation in mid-life males,” by pointing out that every human culture, from the Han Chinese to the Sumerians to the Hebrews, have a story about “a middle-aged man saving his family from a flood.”

“If you’re a Sumerian peasant and you feel the flood waters of the Euphrates rising around your ankles, are you going spend the last remaining energy you have, the last 15 minutes of your life, trying to cut down a palm tree [to make a boat]? No. You’re gonna grab Dad and stay afloat,” Anderson argues. 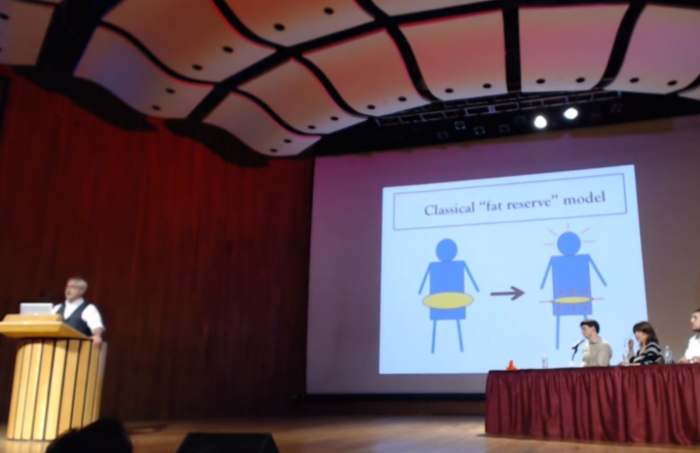 Anderson’s winning theory is one of over a half-dozen presented at BAHfest, or the “Festival of Bad Ad-Hoc Hypotheses.”  The festival, during which professional and amateur scientists alike present very obviously wrong evolutionary theories and back them up with actual data and research, is the brainchild of Zach Weiner, author of the popular web comic “Saturday Morning Breakfast Cereal.”

The author, who jokes that he has “about half of a physics degree,” says the idea came from an issue of the comic in which a similar festival takes place. Once the comic was published, he says, demand for a real-life similar event was strong. So, through what Weiner calls, “a series of good lucky mistakes,” the festival was produced last year in Cambridge with over a thousand people coming to the auditorium. This year, the festival was sold out completely, with almost 1,200 attendees. Coming off of last year’s success, Sunday’s festival was “BAHfest East,” with BAHfest West happening this coming weekend in California.

Interest in the festival was so strong, in fact, that some attendees traveled from overseas. Evolutionary biologist Barbara M.I. Vreede, for example, came all the way from Jerusalem, where she works at Hebrew University. She planned her trip well before the festival accepted her submission– an argument that pathogens such as influenza detect gullibility in hosts and change their behavior to manipulate them into using ineffective treatment, also known as “alternative medicine.”

After watching last year’s event live over the web, she decided she had to be a part of it this year. While calling the conference a good dose of “nerd fun,” Vreede said that there is a larger, more serious point to the fake theories. “All the data is real,” she said of the ad-hoc hypotheses. Seeing what kinds of crazy theories can be interpreted from small sample sizes and viewing correlation as causation demonstrates “how important it is that you interpret data correctly and conservatively,” she said. “Otherwise you get this.”

Kevin Jung, a 19-year-old high school senior at Shawnee High School in Medford, NJ, could barely contain his excitement before the show. “I’m hoping this helps me get into college,” he said. Jung’s presentation argued that the evolutionary function of men’s beards was to store food. While  Jung says science is one of his many interests, he was especially excited to meet the event’s keynote speaker, “Cyanide & Happiness” author Rob DenBleyker.

DenBleyker began the event with a simple example of a bad ad-hoc theory, in which he claimed  that he had solved world hunger. In what he called the “Exponential Oreo Theory,” DenBleyker calmly explained that the first Oreo was introduced in 1912, followed by the “double stuffed” Oreo in 1976, and eventually the “Mega-stuffed” Oreo in 2013. By graphing this small data set, DenBleyker claimed that on February 8, 2079, a single Oreo will be one mile thick and contain 12 million calories. Unfortunately, a week later, on February 17, 2019, a single Oreo will exceed the width of the universe.

Other presenters included Harvard senior Emma Kowal, who argued that yawning is a vestigial trait, originally developed to maximize caloric intake during swarms of flying insects; Weill Cornell Medical College’s Michael LeVine, who claimed that human “smugness” is an adaptive trait conducive to raising fit, successful, and progressively more smug offspring; and Dr. Justin Werfel, of Harvard’s Wyss Institute for Biologically Inspired Engineering, who tried to prove that bugs of all kinds have become progressively more “disgusting” over time as a way of preventing a rapidly increasing human population from using them as a primary food source.

Ben Lillie, co-founder and director of the Story Collider podcast, hosted the event, and made sure to remind the audience of the ultimate purpose of all good science: “to prove objectively that you’re better than your peers.”

The presenters, judged on “force of science,” “artistry,” “parsimony,” and “strength of defense,” competed for a briefcase with $500 cash and a 3-D printed statue of Charles Darwin, shrugging his shoulders with a dubious look on his face and the quote, “I guess so.”

Winner Michael Anderson was one of the few non-scientists presenting. A self-described “left-wing 1st Amendment lawyer” from Boston, his qualification for presenting was getting a 5 on his 1978 AP Biology exam.

He likes the event because he has a “backlog of subversive creativity” that he can’t use in federal court. His original argument, which he changed upon the recommendation of the event organizers was that the “spare tire” is a necessary counter-balance because “older men are more attractive than younger men in every way imaginable.”

The third BAHfest is tentatively planned for October of next year.

The entire event can be viewed at the top of this article.

END_OF_DOCUMENT_TOKEN_TO_BE_REPLACED

Enter to win a pair of tickets to attend The Hess Collection Seminar and Dinner as part of Boston Wine Festival 2018 at the Boston Harbor Hotel on Wednesday, March 14th. END_OF_DOCUMENT_TOKEN_TO_BE_REPLACED

I referred to it as the “best kept secret” in Boston arts for the holidays. END_OF_DOCUMENT_TOKEN_TO_BE_REPLACED

Boston’s arts scene shines at this time of year. END_OF_DOCUMENT_TOKEN_TO_BE_REPLACED

It’s so much more than a holiday show. END_OF_DOCUMENT_TOKEN_TO_BE_REPLACED

Rock for a cause this holiday season. END_OF_DOCUMENT_TOKEN_TO_BE_REPLACED

Get out and see a show this holiday season, and save some money when you do. END_OF_DOCUMENT_TOKEN_TO_BE_REPLACED

You can help give the gift of music to kids in need this holiday season. END_OF_DOCUMENT_TOKEN_TO_BE_REPLACED

Be honest: when’s the last time you attended a Gala? END_OF_DOCUMENT_TOKEN_TO_BE_REPLACED

The October staple returns on the 21st. END_OF_DOCUMENT_TOKEN_TO_BE_REPLACED