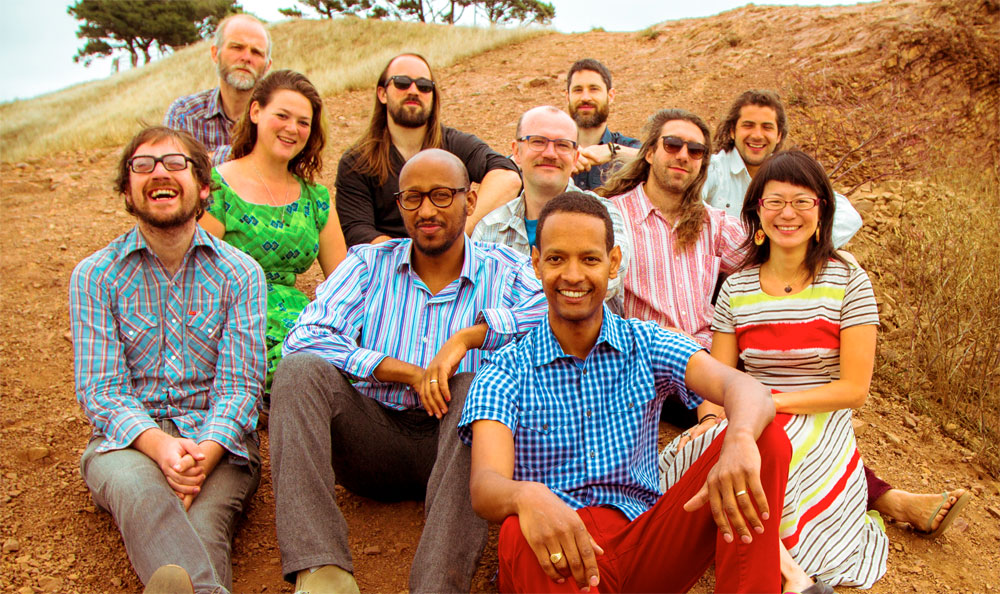 When Harvard-educated ethnomusicologist Danny Mekonnen began an Ethiopian pop-inspired group at 25, he knew that he wanted the music to appeal to all audiences — inclusive of both the do-it-yourself punk scene in Boston and jazz fans alike. Eight years later, after gigging at art spaces in Jamaica Plain, rock clubs in Boston, folk festivals across the US, Bonnaroo, and performances in Ethiopia, Debo Band returns to its roots. The 11-piece band begins a four-week residency at Cambridge’s Lizard Lounge on Thursday night to iron out material for a follow-up to its NPR-acclaimed, self-titled 2012 debut.

Mekonnen began Debo Band, a group heavily influenced by Francis Falceto’s “Ethiopiques” compilations of funk-and-soul-infused local music from Addis Ababa, Ethiopia, during the late ’60s and early ’70s, to reinvent the Ethiopian pop standards with jazz and rock instrumentation. From the start, bandleader Mekonnen didn’t want to be pigeonholed into the world music category — even if his band is comprised of sax, accordion, vibraphone, sousaphone, guitar, and violins. Tellingly, one of its first gigs was at underground music collective Boston Hassle’s Homegrown Psych Fest in 2009.

“We bring music to the dance floor with energy,” says bandleader and saxophonist Mekonnen. “We were a post-punk band. Our first fans were [alternative art/music collective] Whitehaus kids. It happened that we were from Ethiopia, but we wanted to make something for now. We weren’t really seeking to play as a world music band.”

The lead single, “Asha Gedawo,” off its 2012 self-titled debut depicts their aim best, fusing lead singer Bruck Tesfaye’s Amharic lyrics, violins, and a strong brass section within the structure of a rock song. The album, which was picked up by Next Ambiance (an imprint of famed Seattle-based indie label Sub Pop), caught critics’ and fans’ attention and landed them festival appearances across the US and a spot on NPR’s 2012 best album list. The band has also had the opportunity to perform its brand of Ethiopian pop at Boston’s rock clubs, including Paradise Rock Club and Brighton Music Hall.

“It’s not uncommon [now] for people to listen to different music styles. People who listen to grunge also listen to hip-hop. The genre is less important than the space it’s being performed in — the psychic space, the communal space,” says Mekonnen.

Although the emphasis for Debo Band is to put a modern touch on this Ethiopian pop from four decades ago, its debut album focused mostly on “Ethiopiques” source material. Mekonnen, an Ethiopian who was born in Sudan and grew up in Texas, originally met “Ethiopiques” series director Falceto in 2007 while teaching in Ethiopia, who gave the band the opportunity to perform in Ethiopia in 2009 and 2010. It’s full-circle for Mekonnen, who grew up digging into his parents’ collection of Ethiopian music before coming to Boston at 22 to study jazz saxophone.

Along with its first release, 2012 brought the group to major US music festivals like South by Southwest, Bonnaroo, and Bumbershoot, and Debo Band continued to gig regularly in the northeast with stints in the midwest and on the west coast this past year. Its hectic, varied touring schedule has exposed the band to a variety of audiences.

“On the one hand, there are hyper-local scenes in Chicago, Baltimore, and Boston. But, festivals are able to draw a more diverse audience. It’s exciting that lots of different audiences have accepted Debo Band. We’re digging more into the festival season [this year] — all kinds of festivals,” says Mekonnen.

For the next album, the group hopes to expand beyond the “Ethiopiques” series as inspiration. “We’re approaching a 50/50 [mix] of covers and original material. Through relationships with different Ethiopian ex-pats, we’ve got lots of source material and we’re digging into that. We’re starting to work on a Duke Ellington song and a Japanese pop song. We hope to mix elements more and push what the first album did,” says Mekonnen.

First up, though, Debo Band will try out new material on its hometown audience.

“For the residency, we’re figuring out what will work. It’s one thing to play in a practice space… and another to play when you’re in the moment. There’s probably close to 10 songs that we haven’t recorded [that we’ll play]. By the end of the residency, we’ll have played four songs that we’ve never played live,” he says.

Enter to win tickets to see Trio Da Kali at The Villa Victoria Center of the Arts (Newton, MA) on April 10th. END_OF_DOCUMENT_TOKEN_TO_BE_REPLACED

END_OF_DOCUMENT_TOKEN_TO_BE_REPLACED

Enter to win tickets to Rhye at The Paradise on February 28th. END_OF_DOCUMENT_TOKEN_TO_BE_REPLACED

END_OF_DOCUMENT_TOKEN_TO_BE_REPLACED

Enter to win a pair of tickets to attend The Hess Collection Seminar and Dinner as part of Boston Wine Festival 2018 at the Boston Harbor Hotel on Wednesday, March 14th. END_OF_DOCUMENT_TOKEN_TO_BE_REPLACED

Her new album has been pushed back, but we have Kimbra’s new single for you. END_OF_DOCUMENT_TOKEN_TO_BE_REPLACED

The folk duo returns with a new record this week. END_OF_DOCUMENT_TOKEN_TO_BE_REPLACED

Now that we’re done looking back at 2017, let’s look ahead at 2018. END_OF_DOCUMENT_TOKEN_TO_BE_REPLACED