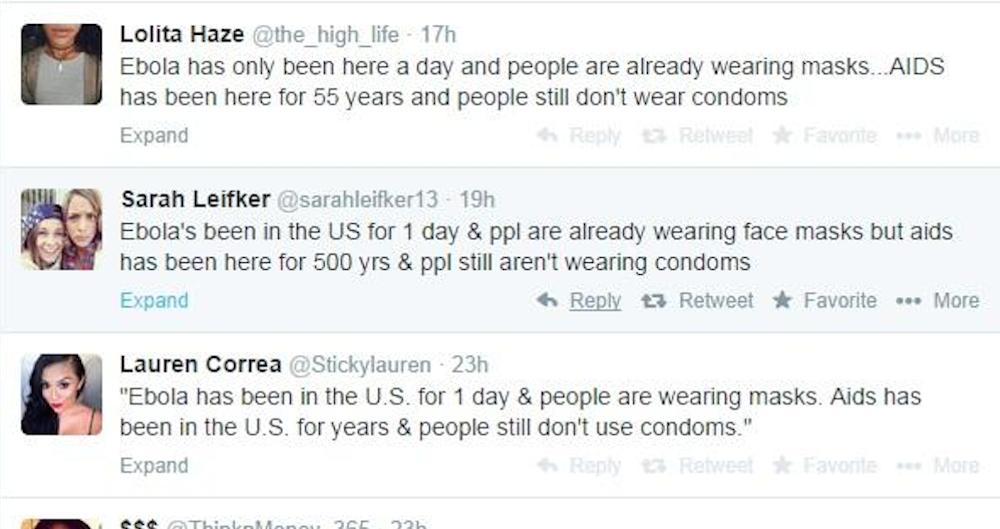 Twitter is good for a lot of things: rapid updates on breaking news, instant analysis from a variety of experts, and trolling corporations and celebrities. But like every other social network, the site is also host to incredibly tasteless, endlessly repeated “jokes,” including one making the rounds today comparing the Ebola outbreak to AIDS in America.

The most obvious example of these Twitter chain letters  is the “Hope, Jobs, Cash” joke – “Ten Years ago we had Bob Hope, Steve Jobs, and Johnny Cash. Now we have no Hope, no Jobs, and no Cash” – that is so old that the endless parody accounts that post it daily have now updated it to twenty years.

Twenty years ago, we had Steve Jobs, Johnny Cash and Bob Hope. Now we have no jobs, no cash, and no hope. Please, don’t let Kevin Bacon die.

Today’s Twitter joke virus is no less annoying, but way more offensive. It all started on September 30th, with this tweet from @Bobby J Comedy:

Over the last few days, the joke has been repeated ad infinitum, oftentimes with factually inaccurate timelines of the disease’s arrival to the US.

Ebola has been in the US for 2 days and yall are already wearing masks, AIDS has been here for 55 years and people still don’t use condoms. — Paul Shapiro (@shappybappy) October 2, 2014

For more trenchant analysis on America’s health practices, be sure to check out opinions from a guy pretending to be Drake and Juicy Jas Dat Ass.

To be clear, we’re not suggesting AIDS, Ebola, and Americans’ unwillingness to openly discuss safe sex options in school and with their partners aren’t issues worth discussing. It’s the false equivalency of the joke — that the national hysteria over Ebola is somehow related to America’s safe sex practices and the spread of AIDS — that is so aggravating, not to mention downright wrong. So now instead of insightful articles from health professionals about the outbreak, our Twitter feeds are full of mindless dreck parroted ad nauseum from a guy pretending to be a cartoon bear.

To conclude, think before you Tweet, people. And find some newer, more original material while you’re at it.

When he’s not running BostonTweet (or running the Boston Marathon), Tom O’Keefe is running around promoting Flutter. He was in studio with SumuApp co-founder Daniel Tewfik earlier today to talk about how you can win free rent for a year in Boston. END_OF_DOCUMENT_TOKEN_TO_BE_REPLACED

While many have called out Davis since a video of her refusing to issue a marriage license to Rowan County residents David Moore and David Ermold went viral in July, relationship columnist and gay activist Dan Savage went a step further on MSNBC Tuesday night, saying that “this is about someone hypocritcally looking to cash in”. He added: “And she is a hypocrite.” END_OF_DOCUMENT_TOKEN_TO_BE_REPLACED

END_OF_DOCUMENT_TOKEN_TO_BE_REPLACED

Today, that briefly changed, as the hashtag #TheWorstPartofDepressionIs trended worldwide on Twitter, sparking a conversation on an issue many find difficult to discuss. END_OF_DOCUMENT_TOKEN_TO_BE_REPLACED

END_OF_DOCUMENT_TOKEN_TO_BE_REPLACED

I’m in my mid-twenties, and I’ve been working as a substitute teacher for the last couple years (I joined Teach for America right out of college). I know some of the girls in classes I teach have crushes on me — high schoolers aren’t very subtle — but I brush it off, because I’m not an idiot. Last week, however, I got a disturbing email from a girl in the English class I subbed for. Pictures were attached. You get the gist. What do I do about this situation? I obviously haven’t responded, but I’m afraid she might go Lifetime-movie on me. END_OF_DOCUMENT_TOKEN_TO_BE_REPLACED