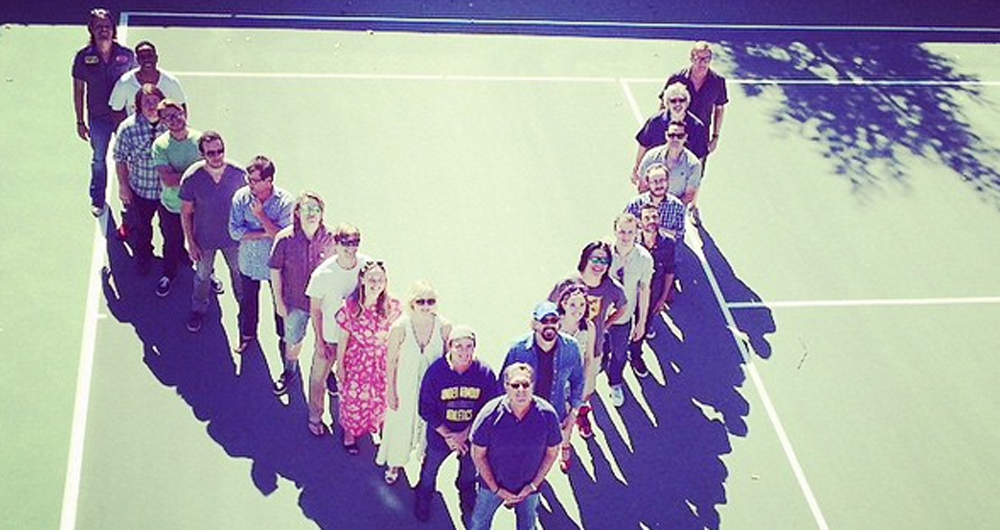 I’m speaking, of course, of the movie “D2: The Mighty Ducks,” which is one of very few sequel films that is better than the first of its series (IMHO). It was 20 years ago that this hockey movie graced the silver screen, teaching us exactly the proper way to fight like a Bash Brother (“stick, gloves, shirt”) showing what sort of damage a knucklepuck can do if executed correctly. To celebrate the milestone anniversary, the Ducks reunited in the most appropriate way: by forming their signature Flying V. Grown up puckheads, such as a healed version of Adam Banks (Vincent Larusso), a slimmer version of goofy goalie Greg Goldberg (Shaun Weiss), and grown-up speedster-who-couldn’t-stop Luis Mendoza (Mike Vitar) showed up to reconnect in honor of double decades for “D2.” While Charlie Conway (Joshua Jackson) and Coach Bombay (Emilio Estevez) were just a bit too cool to show up, there were some pictures snapped to Instagram of the occasion.

It’s hard to make out who’s who in the Flying V pic below, except for the longhaired redheaded grunger in back who is obviously Danny Tamberelli. It was taken via the Instagram of actor Christopher Redman, who is married to the actress who played Connie Moreau.

Speaking of Connie Moreau (Marguerite Moreau), here she is with Luis Mendoza, who true ’90s kids movie fanatics would also recognize as Benny “The Jet” Rodriguez from “The Sandlot.”

And here she is with Julie “The Cat” Gaffney (Colombe Jacobsen).

And don’t forget about Goldberg! Lookin’ good these days, buddy.

The Black and Gold continue their run tonight at TD Garden. END_OF_DOCUMENT_TOKEN_TO_BE_REPLACED

Who will make the Class of 2018? END_OF_DOCUMENT_TOKEN_TO_BE_REPLACED

It’s been awhile since we talked Black and Gold. END_OF_DOCUMENT_TOKEN_TO_BE_REPLACED

You’re going to wish you were in the Northern Alps. END_OF_DOCUMENT_TOKEN_TO_BE_REPLACED

END_OF_DOCUMENT_TOKEN_TO_BE_REPLACED

Bill might be “on to Tennessee,” but we’re not. END_OF_DOCUMENT_TOKEN_TO_BE_REPLACED