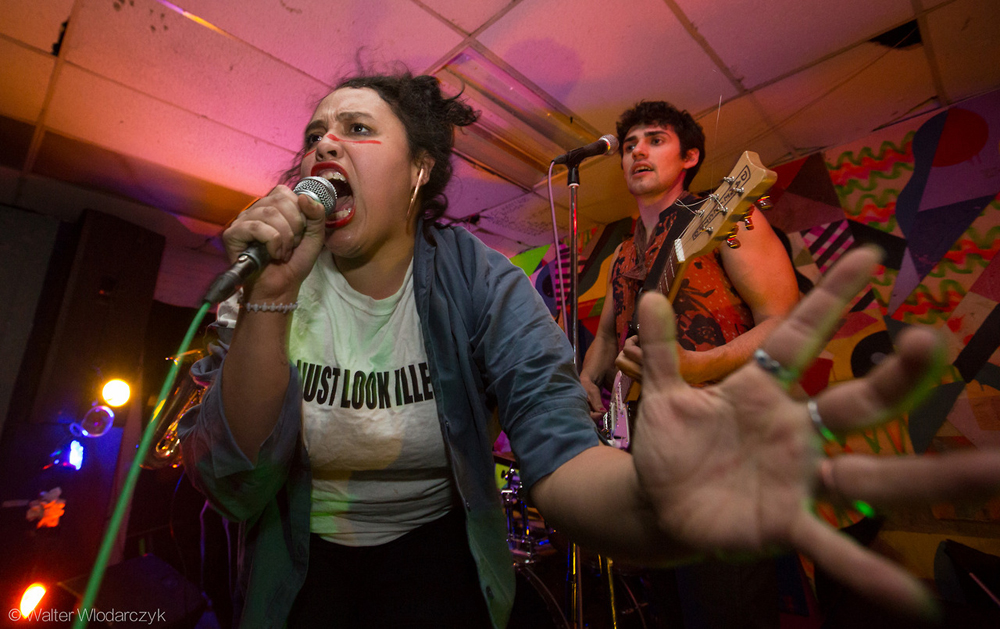 As a punk band, it’s hard to have a driving or responsible message about things like cops without coming off as too blatant or obvious. But after listening to and watching Providence’s Downtown Boys aggressively tackle those themes in their live show, you realize the politically charged, bilingual rock outfit is totally sincere about the realities they center their music around.

Downtown Boys make punk music that intentionally confronts race, capitalist, and gender structures, and with their recent 20-date tour with noise rocker, EMA, the band has been able to take their gloriously abrasive sound to a wider audience. Downtown Boys culminate their tour here in Boston tomorrow night at Great Scott in Allston. After two dates in Canada, the band took some time on their drive back home to talk to us about their first experiences with punk rock, writing about slumlords and queerphobia, and what it’s been like starting and growing as a band in Providence.

Q: What was your favorite city so far?
A: It’s hard to choose. Standouts have been Atlanta, Toronto, Montreal and Bloomington. In Atlanta we opened for really good local band, “No Eyes,” and we had a very supportive crowd. In Toronto there were folks who had heard about us through the Smash it Dead Festival in Boston. They went through a lot of work to find the show and were really psyched. EMA also killed it that night! In Montreal, we had a lot of friends and punks come out who all went nuts during the set. Bloomington we had a day off from the tour and so our friend set us up an amazing basement show. It was crazy to finally meet and talk to so many people that have supported us from afar.

Q: What’s it been like to start and grow with a band in Providence?
A: So much amazing art and music comes out of our city. A small and tight knit group of artists is more beneficial to growth than being in a big city where things get more rigid and overwhelming and anonymous. In no way does a bigger scene necessarily produce better or more radical bands. Providence is also far cheaper than New York or Boston, and in a cheaper city it’s easier (though by no means easy) for poorer people to dedicate time and energy to music.

Q: Downtown Boys obviously deals well with loudness, but what about quietness? Are there moments when you take a step back and just enjoy a little bit of silence?
A: Mostly when we’re asleep.

Q: You know that moment when you listen to music so loud that your eardrums feel like they’re going to explode? What if they did explode and you could never hear anything again – what sounds would you miss the most?
A: Victoria’s (Ruiz) grandma’s voice. The power of the human voice in general. At the moment,“Bat out of Hell,” by Meatloaf. Norlan (Olivo) is a photographer and would miss camera’s shutter sound.

Q: What was your guys’ first experience with punk? What exposed you guys to punk music?
Victoria: My first experience with punk was going to shows and not knowing anyone or even really meeting anyone, but waiting for that moment to hear music, see the mosh pit start, and think about what it would be like without capitalistic artistic creation. I went to a lot of shows in California that were not so friendly to an overweight, Latina nerd, but I am happy I didn’t give up hope.

Norlan: I started going to shows and got hooked on the energy and community. It was empowering.

Joey (DeFrancesco): Being alienated and pissed and searching and searching and then going to those first shows and seeing some glimmer of possibility in everything. Those shows were awful and also alienating, but they allowed me to start seeing what I wanted to create.

Q: Has your taste in music evolved since then?
A: Yes, we hope so. We still like much of what we grew up with, but we’re always searching for new sounds and ideas. In order to be a good artist your tastes needs to constantly evolve. It’s also taken time to find music that’s in line with our worldview. You don’t get that stuff put in front of you when you’re 14—you have to fight and struggle to find art that liberates you.

Q: How hard is it for a band to progress in a DIY setting when listeners are quick to label their music before they actually listen to it or see it performed live?
A: Most of the people who pigeonhole us as a DIY punk band don’t like us because we are loudly against the typical macho nonsense that goes along with that world. The people who like our band are able to hear the weirdness in our music and the centrality of our message and don’t try to box us in. It ends up being harder to be accepted by a single community, but we really are a hard band to label, musically, socially, and aesthetically. We hope that our art ends up bringing more people together from different planets to think about issues and problems that affect every person and every space.

Q: Besides your backgrounds, which are a common theme in your lyrics and songs, what other interests inspire your writing?
A: They aren’t interests they’re realities. Our songs are about what goes on in our lives and there’s nothing else we could write about. We wish we had the privilege to write about our interests but we don’t. We write about workplace issues, racism, slumlords, queerphobia, and standing up for yourself because that’s what everyday life is for us and 99% of the world. Most of life isn’t love and beaches, it’s fighting and grit and desperation. Beauty and unity come out of acknowledging that. Lately I’ve loved this quote from The Dispossessed, “It is our suffering that brings us together. It is not love. Love does not obey the mind, and turns to hate when forced. The bond that binds us is beyond choice.”

In regard to our “Latino-ness,” it’s true Victoria and Norlan are Latin and many of our songs are about fighting white supremacy and the struggles of immigrant workers, and that those songs are largely sung in Spanish. This is an important part of our band and a key part of our message. We should also point out that a lot of the band is white, and is necessarily coming from a more privileged position. Our lyrics, songs, and aesthetics are an interplay of many identities, oppressions, and privileges and they all must be accounted for when evaluating our band.

Q: Have you ever played a show where people aren’t really feeling it? What do you do in that situation?
A: It happens all the time. Either people don’t like our aesthetic or they don’t like our message or there are too many bros or sometimes people love our show but are just too conditioned to be spectators to actively participate. It’s hard—you get caught up in your head, you start thinking about capitalism and mass media and the fear that drives people to be bystanders. But rather than get pissed or lazy, all that almost produces a level of compassion and a desire to get everyone in the room on the same page. It’s like political organizing: we’re always searching for a commonality to unlock the audience. And sometimes we can’t get everyone, or sometimes there are only 5 people there. But there’s always at least one person who we can excite or stun or inspire or anger or help make free for a moment, and because of that one person we’ll always play each show like it’s our last.

Enter to win tickets to see Trio Da Kali at The Villa Victoria Center of the Arts (Newton, MA) on April 10th. END_OF_DOCUMENT_TOKEN_TO_BE_REPLACED

END_OF_DOCUMENT_TOKEN_TO_BE_REPLACED

Enter to win tickets to Rhye at The Paradise on February 28th. END_OF_DOCUMENT_TOKEN_TO_BE_REPLACED

END_OF_DOCUMENT_TOKEN_TO_BE_REPLACED

Enter to win a pair of tickets to attend The Hess Collection Seminar and Dinner as part of Boston Wine Festival 2018 at the Boston Harbor Hotel on Wednesday, March 14th. END_OF_DOCUMENT_TOKEN_TO_BE_REPLACED

Her new album has been pushed back, but we have Kimbra’s new single for you. END_OF_DOCUMENT_TOKEN_TO_BE_REPLACED

The folk duo returns with a new record this week. END_OF_DOCUMENT_TOKEN_TO_BE_REPLACED

Now that we’re done looking back at 2017, let’s look ahead at 2018. END_OF_DOCUMENT_TOKEN_TO_BE_REPLACED