An unknown director, with an unknown producer, and an unknown actress in the film’s lead role—for young filmmaker Ned Benson, the odds didn’t look all too great. But when the unknown actress attached to your film happens to be Jessica Chastain, things change a little.

“The Disappearance of Eleanor Rigby” written and directed by Benson, premieres in New York City and Los Angeles today. Benson stopped by the Kendall Square Cinema in Cambridge earlier this week for a screening of the initial installment of the film—which is the first of three versions of “The Disappearance of Eleanor Rigby” set for release in the next few months. In an exclusive interview with BDCwire, Benson spoke about his relationship with Chastain, the evolution of this script he started ten years ago, its connection with The Beatles, and his success as a young filmmaker.

Benson was 27 years old when he started writing “The Disappearance of Eleanor Rigby.” At that point, he a recent graduate of Columbia University who had grown up in New York City and moved to Los Angeles soon out of college to pursue a career in film. He met Chastain at the premiere of one of his short films—at the time, she was a little known actress who had just joined the cast of “ER.” Benson is now 37, and that initial script in time has since been rewritten (with Chastain’s help) into three unique films.

“Him,” “Her,” and “Them” are threes  versions of the same string of events. “The Disappearance of Eleanor Rigby” examines the ending of a relationship from these separate points of view (the subject matter’s a tab bit ironic, given that Chastain and Benson dated for a time during the production of these films). The narrative follows Eleanor Rigby (Jessica Chastain) and Conor Ludlow (James McAvoy) as they separate in wake of the death of their child. 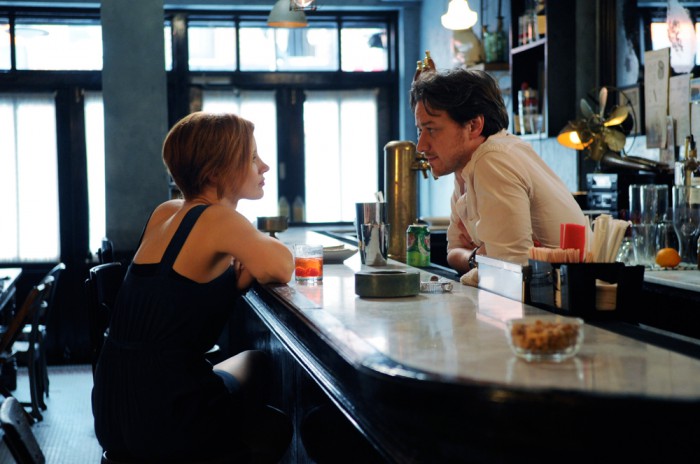 Benson On Making One Plus One Equal Three

Benson: Well essentially, I started writing it as one, which is the “Him” part of the film project. Then Jessica, after reading it, basically had ideas about this character Eleanor Rigby, and was asking me questions—which inspired me to write the “Her” part. So I wound up with this 223-page, two part script. And then ultimately, after premiering in Toronto, people had constantly asked me this question: Could you combine it? Is there a third version of this film? So I got into an editing studio with my editor and producer, and we cut what’s now this third film.

BDCwire: When you first made the decision to make the third film—which is the one that’s premiering first—did you feel like it was even going to be possible? Was it daunting at first to try to imagine the two different films as one?

Benson: One hundred percent. We had no idea if we could pull it off. What we did was assemble chronologically all the footage we had to see what we could sculpt a third film from it, and I think it was a couple days in that we thought we could do it. 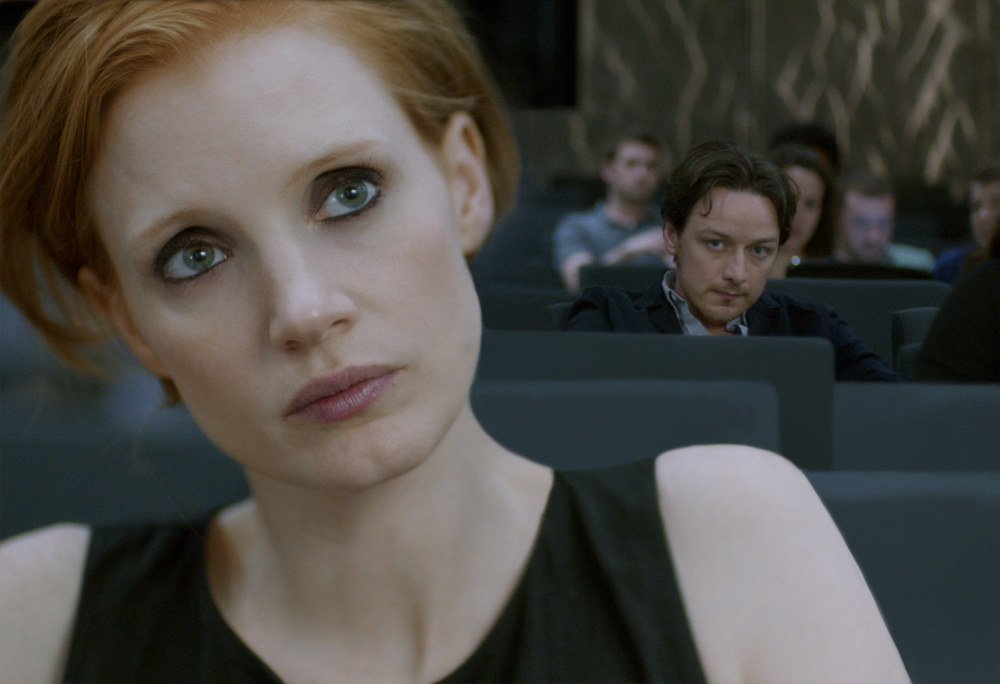 Benson On The Appearance of Jessica Chastain

BDCwire: Now Jessica Chastain got involved very early with the process. Can you talk a little bit about what it was like collaborating with her? What sort of inputs did she have into the final film?

Benson: I mean, it was great. She helped me develop the “Her” script especially. I would be writing scenes every day, and then I could give them to her, and she would sort of have a note or idea, which I think helped infuse that that script was about. Even just little details about being a woman that I couldn’t possibly understand—I think that she was very helpful in informing the female perspective of things. Ultimately, her success and her growing success and her career really helped get the film on track a little bit more. James McAvoy was the actual person who locked our financing once he committed, but I think having Jessica definitely helped in terms of the way things were going for her. 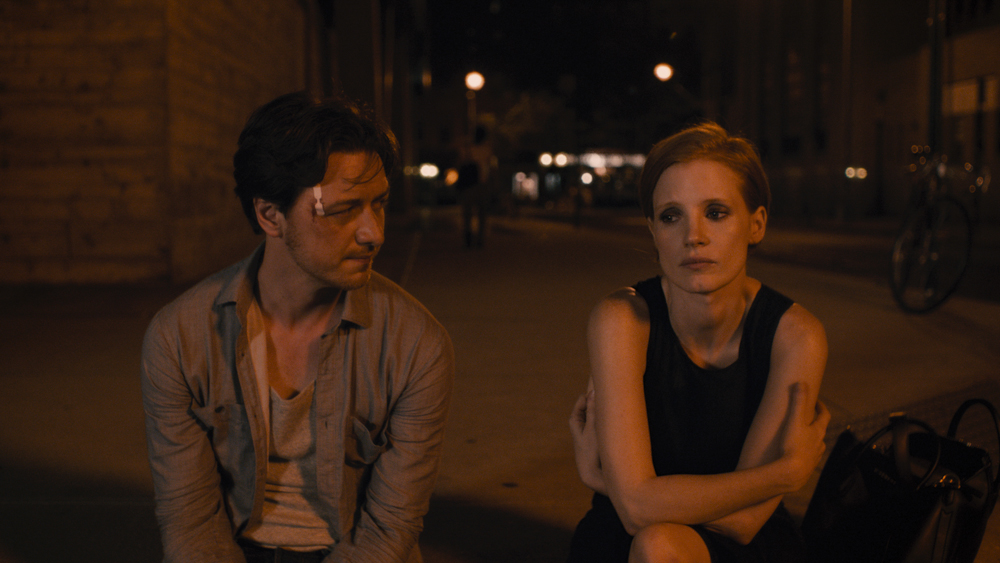 Benson On The Beatles

BDCwire: So the placement of “Eleanor Rigby” in the title: people who know nothing about the film, first thing they’re going to think about is The Beatles. Now how do see the connection between the film and The Beatles’ work, because obviously there are allusions in this version to them?

Benson: Yeah, so one, when I started writing it, I was listening to that song, and the mood of that song, even one of the lyrics that song—“All the lonely people, where do they all come from”—infused itself into the story for me. It just sort of resonated with me, so I thought, oh I’m going to name the character this, and then there had to be a why. And you know, my parents were Baby Boomers, and grew up on The Beatles. My dad got kicked out of high school for stealing a TV to watch The Beatles play on Ed Sullivan for the first time, so I wanted to show that these characters are both reactions and reflections of their parents—and not only culturally, but in terms of how they have handled their own relationships. I think all of us look at our parents as like either something good or something horrible in terms of how they handled their marriage: whether it worked out or whether not.

Benson On Making It As A Young Filmmaker.

BDCwire: So what would you say is next for you as a filmmaker?

Benson: I have another film that I’m going to direct that I’m working on the script right now. It’s about manifest destiny and people trying to create an identity within our culture today. I think we live in a very identity obsessed culture where people are trying to—whether it’s celebrity or whether it’s just becoming known—I wanted to write about chasing that and our own expectations, what happens when you fail or succeed after setting up great expectations for yourself. And it’s set in Los Angeles, which is a city I moved to after college to try and do exactly that.

BDCwire: To go along with that, what advice would you have to young filmmakers that would hope that, maybe in ten, fifteen years, that they would be in a similar position to you right now?

Benson: Write as much as you can. Don’t put all your eggs in one basket. Don’t have just one project. That was how I survived, you know. I also make my living as a writer and pay my rent as a writer, so that’s a very important part of my life.  Keep writing. Or keep finding projects if you’re not a writer and just a filmmaker. Direct as much as you can for as little money as you can so you have the experience and can make mistakes and learn from them. It’s not a sprint. It’s a marathon.

Golden Globe and Emmy nominee Benjamin Wallfisch is the composer responsible for the score of the hit movie IT. I talked to Ben about his approach to scoring the new version of this iconic story and his thoughts on film and music overall. Some very insightful commentary; listen in. END_OF_DOCUMENT_TOKEN_TO_BE_REPLACED

Rupert Gregson-Williams is an award-winning film composer. He just so happened to compose the score for this summer’s big blockbuster Wonder Woman. We talked about his beginnings in film scoring, film scores that move and inspire him and, of course, Wonder Woman. END_OF_DOCUMENT_TOKEN_TO_BE_REPLACED

Jeff Rapsis is a New England-based composer and performer. Lately, he’s been creating live musical scores for silent film screenings. I talked to him about his process and a few of his upcoming performances at The Capitol Theatre in Arlington and the Somerville Theatre. You can keep track of where else Jeff is scoring silent films here. END_OF_DOCUMENT_TOKEN_TO_BE_REPLACED

Planning on seeing Rogue One: A Star Wars Story when it opens this weekend? I joined Adam 12 to give you an idea of what to expect. But don’t worry, I didn’t give anything away. END_OF_DOCUMENT_TOKEN_TO_BE_REPLACED

No, not from afar, from the comfort of her couch. From the actual awards themselves. That’s where Meredith Goldstein was for the Oscars. She shared all the juicy, first-hand details with me. END_OF_DOCUMENT_TOKEN_TO_BE_REPLACED

To celebrate the opening of ‘The Force Awakens,’ I had some very special guests in studio to start the Thursday, December 17 edition of The Brink. Listen. END_OF_DOCUMENT_TOKEN_TO_BE_REPLACED

Watching the new Star Wars trailer a million times gave us all sorts of feels. And one of those feels was nostalgia. END_OF_DOCUMENT_TOKEN_TO_BE_REPLACED

END_OF_DOCUMENT_TOKEN_TO_BE_REPLACED

If you’ve finally finished crying over Inside Out — or Lava, the short that ran before it — Pixar is readying another assault on your tear ducts with The Good Dinosaur, if its newly released trailer is any indication. END_OF_DOCUMENT_TOKEN_TO_BE_REPLACED