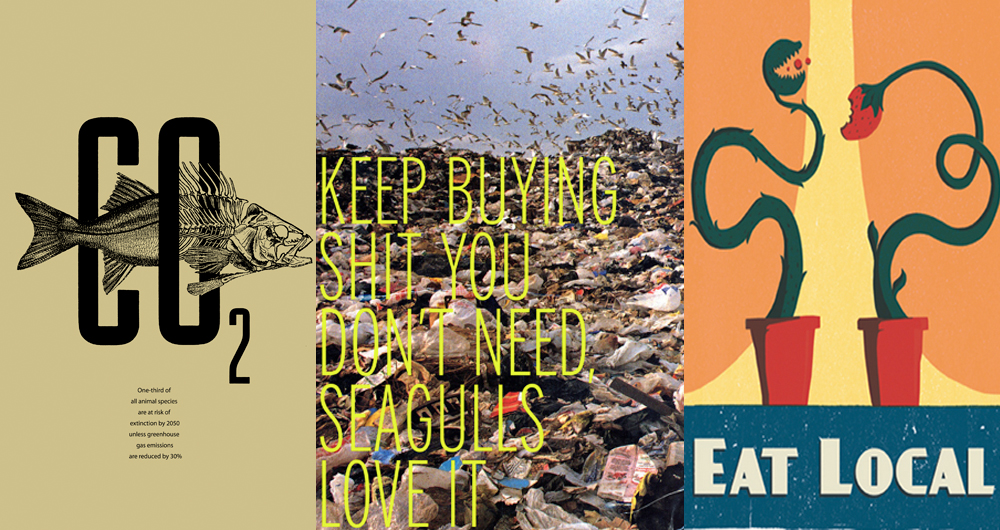 Think back to when advertisements bore images of icons like Rosie the Riveter or Uncle Sam, energizing the masses with their bold demeanors and emphatic statements to mobilize a particular movement. These posters and ideas set the stage for the social and political movements of their time; they made a lasting impression in the minds of  the American public, so much so that they continue to remain two of the most prominent and recognizable images to this day.

In an attempt to recreate the same vigor and appeal of World War Two posters, old images of international cooperation, posters from the environmental movement in the 1960s and 1970s, the Green Patriot Posters project was started; an organization that, since its inception in 2008, has encouraged designers to explore poster design as a medium for visual mass-communication. The main premise behind Green Patriot Posters is to serve as a communications campaign centered on posters that encourage all U.S. citizens to build a sustainable economy. Having amassed immense notoriety throughout the country with the project’s published book of collected poster designs, and showcasing small collections of the posters at an array of museums, Design Museum Boston has created its first national touring exhibition, which includes hundreds of unique posters displayed in print and digitally in the gallery at 315 on A.

Working closely with co-editor of the project’s book, Edward Morris, Design Museum Boston has conceived an exhibit that goes beyond a simple display of art.

“The entire mission behind the Green Patriot Posters movement has been to get the community to contribute and to have it be a public open forum, giving people and designers the opportunity to design a poster and send it in,” says Design Museum Executive Director, Sam Aquillano. “From the beginning, we here at Design Museum knew that we wanted to add to the organization’s already growing collection and thought it would be great to engage high school and college students in by featuring a student competition local to each city that the exhibit runs in. We got 70 entries from local students and have them displayed as a part of the exhibit.”

Mass Art Senior Anna Clark, Lasell College sophomore Hayley Boyle, and Lindsay Malatesta, a senior at Wentworth Institute of Technology, were all chosen as the winners of the Boston-based student competition and their designs can be seen alongside the 35 printed posters – from names like Shepard Fairey – and 500 digitally collection of Green Patriot Posters.

“Design Museum Boston functions as a pop up, using other organizations’ venues, and 315 on A embodies the same values that the Green Patriot Posters project does. Not only is the building Leaf – Labeling Ecologically Approved Fabrics –  certified, but also engages in the same important environmental topics that are fused in the exhibit with the building’s sustainable features, like solar panels on the roof and the fact that the owner is also very sustainably focused,” says Aquillano.

Green Patriot Posters — posters for energy independence and the fight against climate change – will be showing through this Saturday at the gallery at 315 on A in the seaport, before moving onto the exhibit’s second stop in Portland, Oregon, where Design Museum Boston has just opened it’s second location. Be sure to catch the free show while it’s still here in Boston.

Enter to win a pair of tickets to attend The Hess Collection Seminar and Dinner as part of Boston Wine Festival 2018 at the Boston Harbor Hotel on Wednesday, March 14th. END_OF_DOCUMENT_TOKEN_TO_BE_REPLACED

Artists for Humanity Co-founder Jason Talbot and Major Gifts Director Emily Smaldon were in studio this morning with Mallory Bazinet, Event Manager for GrandTen Distilling. Jason and Mallory talked about The Contemporaries, their upcoming event to launch a new patron group for young professionals. Click here to join them on Thursday, August 17! END_OF_DOCUMENT_TOKEN_TO_BE_REPLACED

Aida Villarreal-Licona is the Events Coordinator for SoWa Boston’s Art & Design District. She was in today to talk about their holiday shopping event this Thursday December 15 from 4-8 p.m. at 450 Harrison Avenue. A great opportunity to help local artists and get some holiday shopping done! END_OF_DOCUMENT_TOKEN_TO_BE_REPLACED

Natalie Lemle was in to talk about ArtLifting, a program that aids homeless and disabled artists. Currently, 72 artists in 11 states are receiving 55% of all profits from your purchase of their artwork and photography. Click “more” to hear my chat with Natalie and to see work from one of the artists. END_OF_DOCUMENT_TOKEN_TO_BE_REPLACED

Boston band Funeral Advantage is Tyler Kershaw. And Tyler Kershaw had a fun childhood, so it seems. END_OF_DOCUMENT_TOKEN_TO_BE_REPLACED

Perry put me on to daephne and the album blew my mind. END_OF_DOCUMENT_TOKEN_TO_BE_REPLACED

Watching the new Star Wars trailer a million times gave us all sorts of feels. And one of those feels was nostalgia. END_OF_DOCUMENT_TOKEN_TO_BE_REPLACED

It’s no secret that Bostonians like to show their Patriot pride with tattoos. Who can forget the awesome guy who got that sweet Bill Belichick arm tattoo? Or the less-awesome guy who showed off his full-head Tom Brady helmet tattoo in his mugshot? END_OF_DOCUMENT_TOKEN_TO_BE_REPLACED

Kevin Slane was in 6th grade in the year 2000. I was starting my radio career in the year 2000, peddling the sounds of Limp Bizkit and the like. So we decided to try and stump one another with some alt-rock sounds from that year. Listen in and feel free to play along. END_OF_DOCUMENT_TOKEN_TO_BE_REPLACED