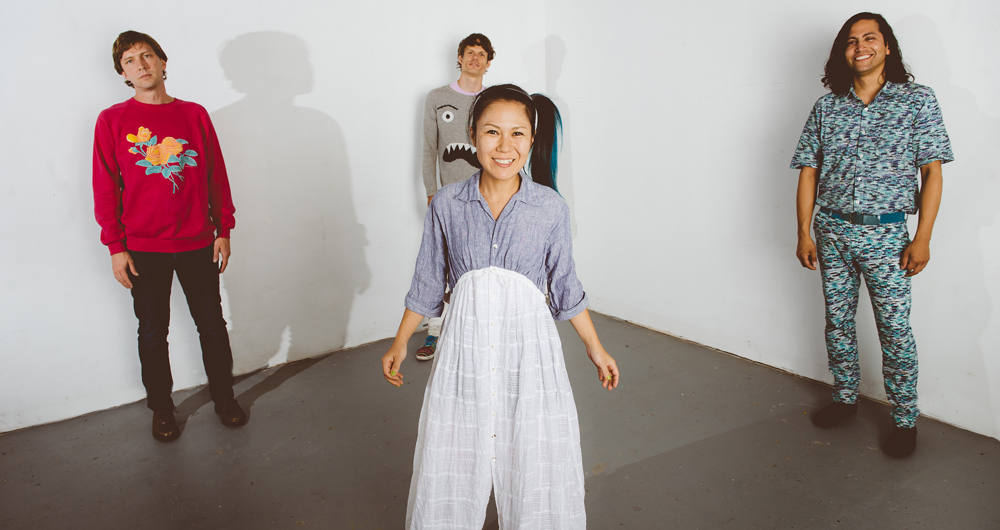 Still listening to T Swift? I guess we can’t blame you, but don’t let it take away from some of the great music hitting the shelves this week. Catch new records from a San Francisco art-punk staple, a popular Canadian beat maker, and more.

Through a chamber of reverb and persistent snare, Close Talker’s sophomore record “Flux” creates an atmosphere that comes in sweet waves. Moments roll like a good highway song with quick plucks of guitar (“For the Sun”) and gang vocals (“Heads”). “The Silence I” and “The Silence II,” calm and contemplative overtures that brick the middle of the album, balance the immediacy of the former tracks with melancholic poems on the ineffectiveness of language. Elsewhere, saxophone (“Blurring Days”) and trumpet slip in, striking a middle ground between the plucky, bouncy guitars and hollow drums. Everything in the Saskatoon quartet’s sound hearkens back to the last great generation of indie music, enlivening sounds from The Shins, Modest Mouse, Wolf Parade, and even Band of Horses. “Flux”‘s one discernable failing is it’s repetitious nature, but that’s all part of the trance that the Canadian soothsayers are aiming at.

Sounds like: An echo chamber filled with James Mercer’s poems, that band you saw open for Glenn Yoder and the Western States at TT the Bear’s but whose name you can’t recall

-Jerard Fagerberg
The Venezuelan producer known as Arca has become associated with forward-thinking pop music through his work with artists like Kanye West (on “Yeezus”), FKA twigs (on “LP1”), and Björk (on her upcoming album). Despite those high-profile collaborations, his sensibilities run much more experimental, as evidenced by his debut album, “Xen.” The 15 tracks on the album feel less like songs and more like alien organisms: constantly evolving and changing shape; utterly futuristic yet organic and sensual; difficult to classify. The tone is also unpredictable, quickly jumping from moments of beautiful serenity to moments of razor-sharp noise and more. These traits could result in a work that is both messy and jarring, but on “Xen,” they only seem to enhance the uncompromising nature of Arca’s bold originality. He establishes his place as one of the most interesting new voices in electronic music with a fascinating, puzzle-like album to be pored over and picked apart.

-Tyler Cumella
The Canadian born DJ and producer is back with an album worth of electronic jams that will warm you up for sure. Hemsworth is less on the EDM side of things and more harmonious with his songs. He makes good use of guest vocals that add a soulful layer to the already slickly produced tracks. Hemsworth’s album is perfect for late night listening or that “study music” playlist, it’s all purpose electronic music for those of us who are sick of Skrillex and Avicii taking over.

-Michelle Buchman
We thought it might be coming to an end for San Francisco art rockers Deerhoof in 2012 with the very literal title of their previous album “Breakup Song.” Luckily, one of the more innovative bands on the touring circuit has persevered, and taken more risks than ever before. “La Isla Bonita” dodges a bit of the sonic overload of previous endeavors, aiming for a more pacified journey that can still keep noise rockers excited. And that’s not to say that the record doesn’t have its doses of strange energy. Lead track “Paradise Girls” is one of the best to kick off any album this year, with an organically layered funk frenzy, while “Exit Only” goes back to some of the band’s early pleasant cacophonous approach. It’s the mellow grooves where we get to see an interesting new angle to Deerhoof, one that matches Satomi Matsuzaki’s tone as good as ever. Oh, and if you ever have a chance to see Greg Saunier play drums, that alone is worth the price of a ticket to see Deerhoof get crazy.

Sounds like: The Go! Team without all of the electronics and on a few painkillers, a RISD student actually expressing some positive emotion

-Perry Eaton
Les Sins has been an idea living inside Chaz Bundick’s head for about as long as Toro Y Moi has, but not until now has the idea been realized in totality. For his latest debut, “Michael”, Bundick assumes the name Les Sins and drops throbbing dance beats, with minimal lyrics, deep bass lines and pulsing synths. It’s a full-throttled, unapologetic leap to the dance floor that reveals a talent his previous works have only hinted at: a much more intricate and club-friendly side. Designed to be the more dance-centric offering, Les Sins excels in ways Toro Y Moi never could because Bundick’s trademark baritone is no longer present. Rather, Bundick utilizes voice cues as rhythmic ammo in each of his danceable onslaughts. I mean, seven seconds into the track “Toy” and you can hear Bundick replace a snare with someone coughing. Which is seriously awesome. And although Bundick’s inspirations run rampant across the back half of Michael, the Toro y Moi braintrust is as in-tune with his influences as any originator possibly could be. His product never comes close to replication.