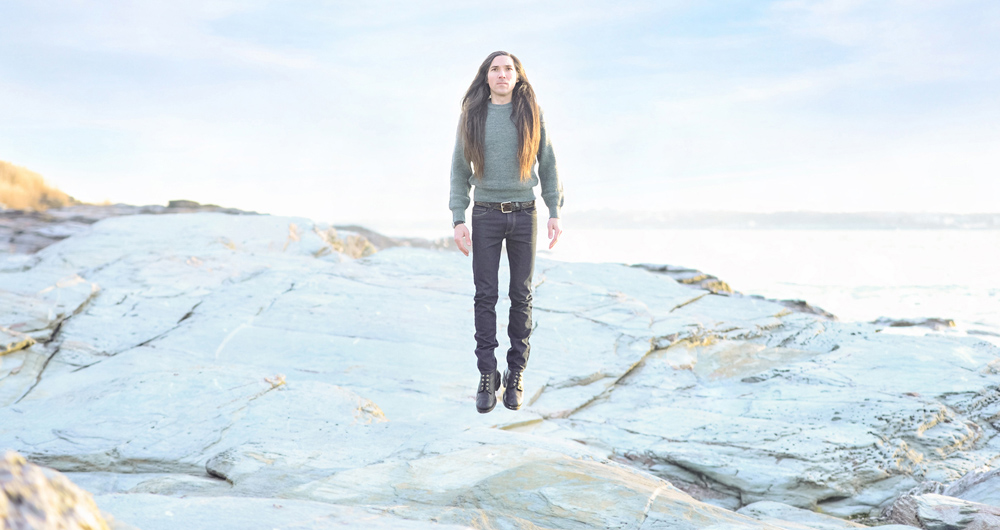 Usually tales of months-long overseas recording sessions devolve into mythologically bloated excesses that are only revealed by the amount of cocaine that bellows from the box containing a master reel and the number of relationships Stevie Nicks has destroyed. For Providence’s Joel Thibodeau, a few trips to Iceland didn’t create any such tempest, instead the results are merely found in the exquisite “Island Intervals,” the third album from his band Death Vessel.

[Disclaimer #1: Do not judge this band by the name and the fact that there is some northern European thing going on here. Death Vessel is not a metal band wanting to record in a studio with twenty-hour nights and pitchers of reindeer blood. In fact, if you’re expecting a Cookie Monster-style growl and heavy distorted instruments, you’re going to get quite the opposite: dense, mostly acoustic tracks fronted by a soprano voice.]

How does a singer who grew up around Kennebunk come to spend more than three months in Reykjavik working on a record? After Stringbuilder, a band he fronted with his brother Alec, disbanded, Thibodeau adopted the new name and recorded an album. “Stay Close” was heard by Sub Pop, who released the follow-up “Nothing is Precious Enough For Us” in 2008. The following year, when Sigur Ros’ singer Jónsi did a solo tour, Death Vessel was handpicked for the opening slot after a friend had sent producer Alex Somers an mp3.

[Disclaimer #2: That soprano does belong to Thibodeau. Most ears’ first exposure to his voice expect a different gender pronoun. His soprano tone is clear in the way that Emmylou Harris can be, but his timbre makes him unmistakable once you know him. Somers admits, “I actually wasn’t sure, it’s pretty androgynous.” Also, while we’re at it, his name is pronounced either like he’s Superman’s uncle or the actress who plays Ava Crowder on “Justified” (Jo-el or Joelle).]

“The first night [of tour] Jónsi approached me about doing a song together, which had me confused since I thought he meant that night, but it was to co-write a song.” By the end of tour, Somers had worn Thibodeau down enough so that when the invitation came, he flew to Iceland for a week to see how they worked together in the studio. With promising results, Thibodeau headed back to Reykjavik for two months in the fall of 2012 and then a final month in May of 2013. The song “Ilsa Drown” is the result of his work with Jónsi while Somers was deeply involved in the whole project.

“We really slaved over all of the details,” Somers said. “There were lots of gaps between the sessions, so there was so much time listening to rough mixes and figuring out exactly what we wanted to do. I fell lucky about that, even though it took forever, we were able to be thorough and explore every avenue we wanted. The only thing we didn’t get to record that we talked about was an actual loom.”

Only during the first week of recording was Thibodeau joined by another American. His previous producer Pete Donnelly [the Figgs] helped lay down the framework of the tracks before Somers and Thibodeau made them blossom. Donnelly said, “These songs are still very ‘Joel,’ but with the addition of Alex Somers as producer, there’s a whole new palette going on. The production is more stylized on “Island Intervals” than on previous records. I think it serves these songs exceptionally well.”

[Disclaimer #3: The drums on the album were sent out to Finland where Múm drummer Samuli Kosminen recorded his tracks. The band is an international creation with the three regions represented on the nowhere-near-scale maps that occupy the cover artwork done by Alec Thibodeau. Even if they only exist in the studio, Somers found that they became a band in the process of making the album. “There was really no line between what my role was and what his role was, it was the two of us doing everything, collaborating.”]

While the process influenced the results, the most important part might just have been getting away from Rhode Island. Being disconnected from all of the daily distractions has a way of helping distill the focus, and these songs reveal that streamlining. But what is really reflected in the songs is Reykjavik itself.

Thibodeau said, “It’s a great city and for me– it was kind of important to go somewhere else. This was a lot more intensive, in the sense that I was relocated all together. I needed to distance myself from my own living situation. It was good to be in a different country and feel like I was on the outside looking in. It was pretty much a solitary endeavor outside of the studio.”

Whether Thibodeau got into much debauchery along the way is uncertain. An introspective sort, mostly he was left to his own devices. Somers admits that if there were seedy stories to tell, he might not know them.

“I’m really bad, I didn’t take care of him at all. We just left him to do his own thing. We were working 5 days a week, really long hours, but on the weekends we would just meet up for drinks at the end of the day. I just let him be on his own.”

Whatever it was that Joel Thibodeau did during his downtime in Iceland [he did admit to renting a car on a few occasions to “go exploring”], we might never find out precisely, but odds are good that there probably were no suitcases full of blow.

“I think I heard a police or ambulance siren twice the whole time I was there. It was a very different metropolitan living experience than you would have even in a US town of similar size. You had to create your own distractions there.”

[Disclaimer #4: Death Vessel is opening for Shearwater at the Brighton Music Hall on March 25 and is scheduled to perform at this Summer’s Newport Folk Festival. To take these songs on the road, Thibodeau has formed a group from some of the best musicians in Providence: Eyesores bass player Christopher Sadlers, guitarist Jeffrey Underhill (Velvet Crush, Honeybunch) and percussionist Rachel Blumberg (the Decemberists).]

Enter to win tickets to see Trio Da Kali at The Villa Victoria Center of the Arts (Newton, MA) on April 10th. END_OF_DOCUMENT_TOKEN_TO_BE_REPLACED

END_OF_DOCUMENT_TOKEN_TO_BE_REPLACED

Enter to win tickets to Rhye at The Paradise on February 28th. END_OF_DOCUMENT_TOKEN_TO_BE_REPLACED

Her new album has been pushed back, but we have Kimbra’s new single for you. END_OF_DOCUMENT_TOKEN_TO_BE_REPLACED

The folk duo returns with a new record this week. END_OF_DOCUMENT_TOKEN_TO_BE_REPLACED

Now that we’re done looking back at 2017, let’s look ahead at 2018. END_OF_DOCUMENT_TOKEN_TO_BE_REPLACED

Our first Song of the Week for 2018. END_OF_DOCUMENT_TOKEN_TO_BE_REPLACED

In a year when so many things were off, the music was right on. END_OF_DOCUMENT_TOKEN_TO_BE_REPLACED