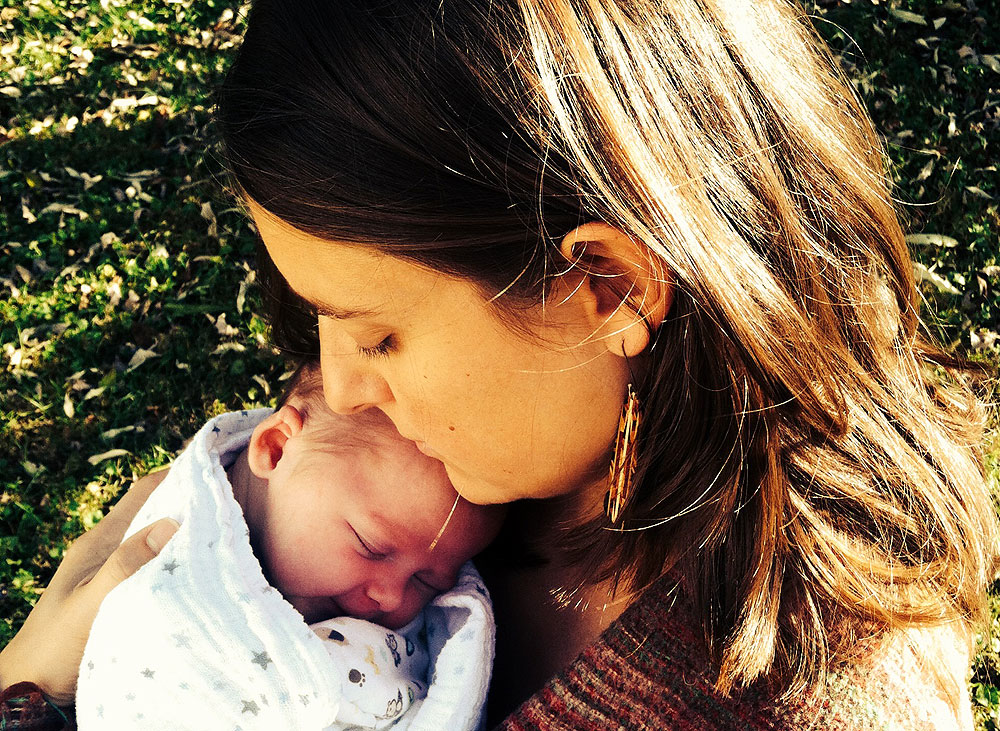 Just after the close of its final tour of 2013, the David Wax Museum welcomed a new member — or, technically, the newest addition joined the band before she made her official debut. Suz Slezak, the fiddle and donkey jawbone-playing half of the duo, toured with the neo-folk Mexo-Americana act up until three weeks before she gave birth to her first child, Calliope Ruth, in early November. Life didn’t change all too much for the folk musician during her pregnancy; she’s been living a nomadic existence alongside her bandmates as the they’ve been touring full-time since fall 2009, more or less, so it’s hardly surprising that a burgeoning belly failed to keep her, David Wax, and the rest of the crew from the tour dates they had scheduled across the country. The baby’s a natural so far at this whole band life thing — she didn’t make a peep when it was time for them to get together to rehearse for their year-end hometown show at The Sinclair on Saturday — and that’s only a slight surprise to Slezak.

“I don’t know if she has a favorite song, but the other day, when we were rehearsing for the Boston show, she was sitting in a little bouncy seat nearby,” she says. “It got pretty loud, and she was totally unfazed. Like, didn’t peep. I had this feeling like she does know all these songs so well and had heard them most of her in-utero life. I was onstage with the electric bass pumping and the drum set behind her, and she’s pretty unfazed by the loud music, so we’ll see.”

Since the littlest member of the David Wax Museum has joined its ranks on the road, a tiny pair of purple headphones has worked its way into the clutter of musical instruments the group has amassed over the past few years — and the band continues to grow in other ways, just as it has at an exponential rate since they first started playing out on the weathered stages of Toad and Club Passim years ago. When fans attend a David Wax Museum show, they expect a ukulele, an acoustic guitar, a fiddle, and quejada, or donkey jawbone; with 2012’s “Knock Knock Get Up,” the group added drums, an electric bass, a keyboard, and guitars of an electric ilk, pairing the ecstatic refrains brought about by Wax’s furious strumming and Slezak’s exuberant cries with a poppier, indie-laden pulse. For some, the shift may be jarring, as it’s difficult to think of a David Wax Museum show that eases up on the need for more donkey jawbone.

For others, it’s a plugged-in, turned-up way to intensify the earnest lyrics and inventive instrumentation that the David Wax Museum has built its foundation upon, and Slezak finds the stylistic shake-up to be a welcome, natural change.

“We’re using electric guitar in more songs and playing more keyboards with different sounds,” Slezak says. “We’re moving away from the more standard folk sound that we started with. Because I grew up in such an acoustic, folky world, I couldn’t stay in the band if it got really electric or hard-sounding. To my ears, it still is awesome, accessible, fun, catchy music, but we’re definitely experimenting
with more of a rock-indie sound, and it’s really fun to go in that direction and not feel like we have to play only acoustic instruments to keep our identity. That being said, a couple of the new ones are these incredible, fast Mexican traditional songs that we’re doing our own new twist on. We definitely still have a foot in that sound as well. The next batch of songs is phenomenal, but they don’t necessarily sound Mexican. That sound of that strummy guitar has become a symbol for our band, but … we’ve evolved enough as a band and we’re getting our own identity that it’s less important to bring in the Mexican feel, even though it’s a part of our sound anyway. It’s a part of us and a part of this band, but in a changing way.”

Though its plans are informal for the coming year, the band plans on heading back into the studio to record the wealth of new material they’ve written throughout their travels this year. The David Wax Museum are eager to head home, which for them is anywhere that involves the open road and a slew of stages they haven’t met yet. Still, the wealth of new joys — be they babies or newborn songs — are abundant at the moment, and the band is ready to reap their simple, hard-earned, and hard-loved rewards.

The next record “won’t come out for sometime, so it’s actually working out well that the baby came when she did,” Slezak says. Maybe by the time the band hits the studio, the baby will be old enough to contribute a maraca shake or two to the new tracks.

END_OF_DOCUMENT_TOKEN_TO_BE_REPLACED

Enter to win a pair of tickets to attend The Hess Collection Seminar and Dinner as part of Boston Wine Festival 2018 at the Boston Harbor Hotel on Wednesday, March 14th. END_OF_DOCUMENT_TOKEN_TO_BE_REPLACED

I referred to it as the “best kept secret” in Boston arts for the holidays. END_OF_DOCUMENT_TOKEN_TO_BE_REPLACED

Boston’s arts scene shines at this time of year. END_OF_DOCUMENT_TOKEN_TO_BE_REPLACED

It’s so much more than a holiday show. END_OF_DOCUMENT_TOKEN_TO_BE_REPLACED

Rock for a cause this holiday season. END_OF_DOCUMENT_TOKEN_TO_BE_REPLACED

Get out and see a show this holiday season, and save some money when you do. END_OF_DOCUMENT_TOKEN_TO_BE_REPLACED

You can help give the gift of music to kids in need this holiday season. END_OF_DOCUMENT_TOKEN_TO_BE_REPLACED

Be honest: when’s the last time you attended a Gala? END_OF_DOCUMENT_TOKEN_TO_BE_REPLACED

The October staple returns on the 21st. END_OF_DOCUMENT_TOKEN_TO_BE_REPLACED