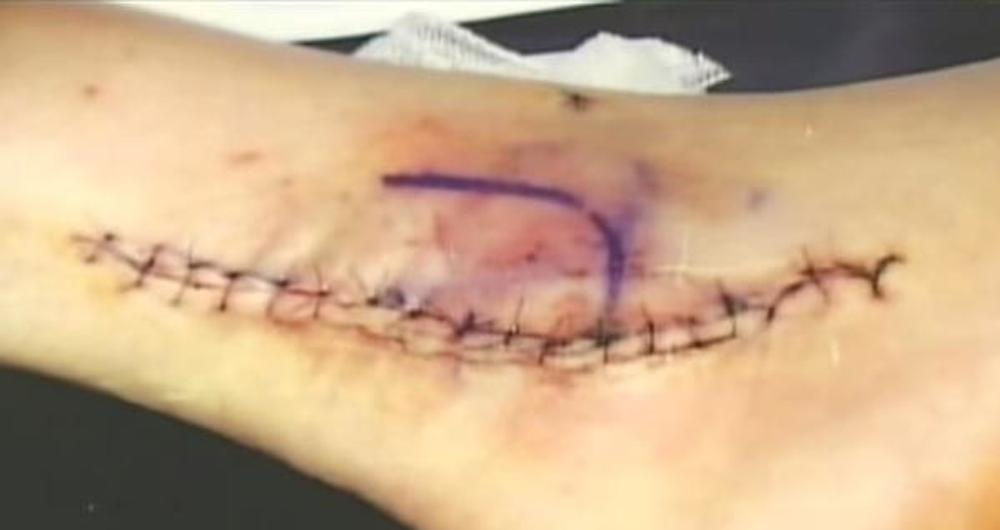 Everyone remembers Curt Schilling’s gutsy performances in Game 6 of the ALCS and Game 2 of the World Series in 2004 — or at least they remember the blood seeping through his sock. But some conspiracy theorists claim the blood was fake, which led Schilling to post some truly gruesome photos of his ankle on Twitter today.

Found this in an old folder, for all you ketchup dinks.. pic.twitter.com/DuJiCQfE9M

Wow. That is… something. (And that something is disgusting.)

Back in 2007, Schilling angrily responded to a Baltimore Orioles announcer who insinuated the sock blood was fake by offering to donated $1 million to charity if anyone could prove the spurious claim. Of course, due to Schilling’s well-documented financial woes, a million-dollar donation isn’t possible, so a grisly ankle photo will have to suffice.

Schilling had to auction off the sock that covered that oozing battle scar for a little over $92,600 last year. But even if the memorabilia is gone, the memories of his heroic 2004 performance will never fade.

In the meantime, Schilling is spending the rest of his day on Twitter convincing people evolution doesn’t exist and responding to Twitter trolls in a way that suggests he’s been taking Twitter lessons from fellow ex-Red Sox player Jose Canseco.

Settle in and listen to this world changing mind, he's eccentric and awesome, you have to rethink your world. https://t.co/Lf7FMjh00D

Enter to win a pair of tickets to attend The Hess Collection Seminar and Dinner as part of Boston Wine Festival 2018 at the Boston Harbor Hotel on Wednesday, March 14th. END_OF_DOCUMENT_TOKEN_TO_BE_REPLACED

The Black and Gold continue their run tonight at TD Garden. END_OF_DOCUMENT_TOKEN_TO_BE_REPLACED

Who will make the Class of 2018? END_OF_DOCUMENT_TOKEN_TO_BE_REPLACED

It’s been awhile since we talked Black and Gold. END_OF_DOCUMENT_TOKEN_TO_BE_REPLACED

You’re going to wish you were in the Northern Alps. END_OF_DOCUMENT_TOKEN_TO_BE_REPLACED