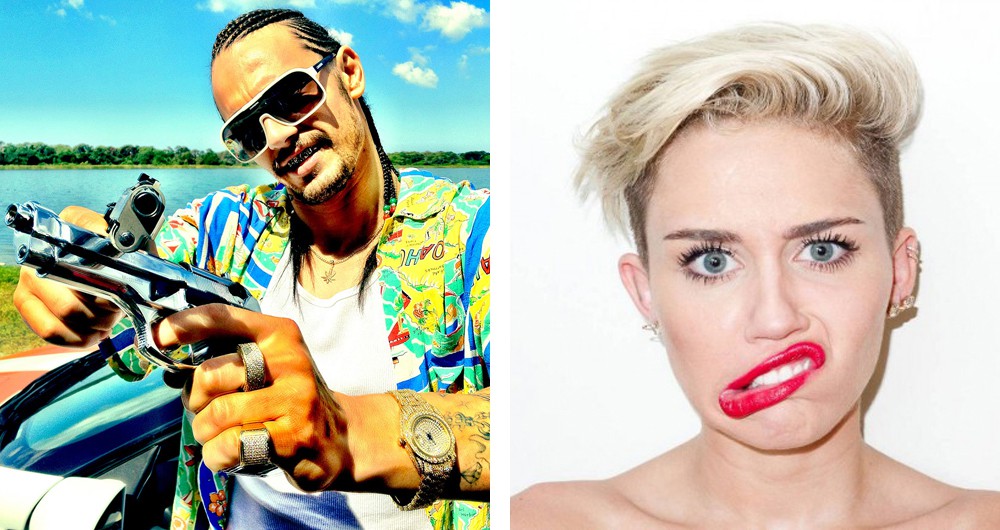 After the blizzard this past week, I’m sure many of you are thinking of getting away, off to someplace warm and sunny.  Some of you may even be planning trips for spring break. In honor of that well-worn idea, this edition of Cultural Sommelier will be focusing on the trashy pop art of Harmony Korine’s Spring Breakers and Miley Cyrus’s Bangerz. Writing about these two works in tandem feels like a no-brainer.

Harmony Korine is quite the provocateur, and chances are you either love him or hate him.  Starting with his screenplay for Kids (1995), he has constantly sought to push boundaries and has stirred up controversy and distaste along the way.  That’s certainly the case with 2013’s Spring Breakers, which has generated equal parts acclaim, controversy, and debate since its release.  Starring James Franco, Vanessa Hudgens, Selena Gomez, Ashley Benson, and Rachel Korine (wife of the director), the film follows four college girls as they “descend” into crime, violence, and drugs all in the name of spring break.

Most of the debate around Spring Breakers has been aimed at whether the film, in its depiction of young, nubile women, is misogynistic and exploitative or feminist or somewhere in-between. Sure, the film does feature endless footage of more than half-naked beautiful young women (two of them former Disney starlets), but I think, when it comes down to it, that it’s not all in the service of mere eye candy.  In following the debauchery of these girls, the film takes an ambiguous yet incisive look at American culture and its superficial obsession with surfaces. Are we supposed to be turned on or despairing?  Or should we be despairing because we are turned on?  In the end, it feels as if Korine wants to punish audiences in some way, pushing American culture’s proclivities and obsessions into hallucinatory, nightmarish territory.

Aside from all that big talk, though, Spring Breakers has the makings of a cult classic, hated by a large number of people upon its release, loved adamantly by a smaller few, featuring an iconic performance by James Franco (as Alien, obviously inspired by Riff Raff), and with endless aesthetic pleasures.  The influence of both hip-hop and EDM is all over it, even as the score veers into moments of hypnotic ambience.  Video games also play a large hand, with the ending feeling like a druggy, dreamlike twist on RPGs and big boss battles.  It is, as Korine himself has put it, “impressionistic, like a pop poem, a reinterpretation, or a cultural mash-up or something.”  The two biggest selling points for me, however, are the neon, candy-coated cinematography and the almost Terrence Malick-esque editing, which truly show off the film’s avant-garde tendencies.  Turns out the true pleasures of Spring Breakers are rooted in a love for cinema.

Like Vanessa Hudgens and Selena Gomez, Miley Cyrus is of the former-Disney-starlet school, recently shaking off any remnants of that image with her public performances, her music videos, her music, and so on. Her album, Bangerz, was released the same year as Spring Breakers, and the music, along with her surrounding descent into “girl-gone-wild” territory, somehow managed to stir up even more controversy and debate. Any inanity aside, the mere fact that people were so riled up by a former “good girl” taking hold of her image in such a way is quite telling.

First things first: how does Bangerz hold up as a musical work? Let’s just say that I can’t claim to be the biggest defender, but it does, at times, manage to reach dizzying pop heights and maintain a singular vision. Highlights include “We Can’t Stop,” “Adore You,” “Wrecking Ball,” and “FU,” a mix of heart-on-her-sleeve ballads, strange pop confections, and an uneasy blend of EDM and hip-hop. There are certainly some low points on the album (particularly when she makes an attempt to rap), but what comes across most in the end is the overall sense of youthful exuberance, playing with that idea in a number of different contexts, both the good and the bad.

While Cyrus’s exploration of new, more “adult” musical territories threw some people off, what stirred them up the most was her behavior in the public eye and the music videos for a number of the tracks.  I’m not going to argue in favor of the artistry and deliberate provocation of either her performances or her music videos, but one thing is clear: Miley Cyrus has taken control of her image, and she doesn’t really care what you think.  Her album and the surrounding controversy, much like Spring Breakers, seems to be an act against the scathing, voyeuristic eye of American culture, toying with ideas of titillation, transgression, indulgence, and female independence.

I think the merits of Spring Breakers are far greater and more rewarding than those of Miley Cyrus’s Bangerz, but they both manage to deliver similar ideas and commentary on modern culture in their own distinct and challenging ways.

Enter to win tickets to see Trio Da Kali at The Villa Victoria Center of the Arts (Newton, MA) on April 10th. END_OF_DOCUMENT_TOKEN_TO_BE_REPLACED

END_OF_DOCUMENT_TOKEN_TO_BE_REPLACED

Enter to win tickets to Rhye at The Paradise on February 28th. END_OF_DOCUMENT_TOKEN_TO_BE_REPLACED

Her new album has been pushed back, but we have Kimbra’s new single for you. END_OF_DOCUMENT_TOKEN_TO_BE_REPLACED

The folk duo returns with a new record this week. END_OF_DOCUMENT_TOKEN_TO_BE_REPLACED

Now that we’re done looking back at 2017, let’s look ahead at 2018. END_OF_DOCUMENT_TOKEN_TO_BE_REPLACED

Our first Song of the Week for 2018. END_OF_DOCUMENT_TOKEN_TO_BE_REPLACED

In a year when so many things were off, the music was right on. END_OF_DOCUMENT_TOKEN_TO_BE_REPLACED