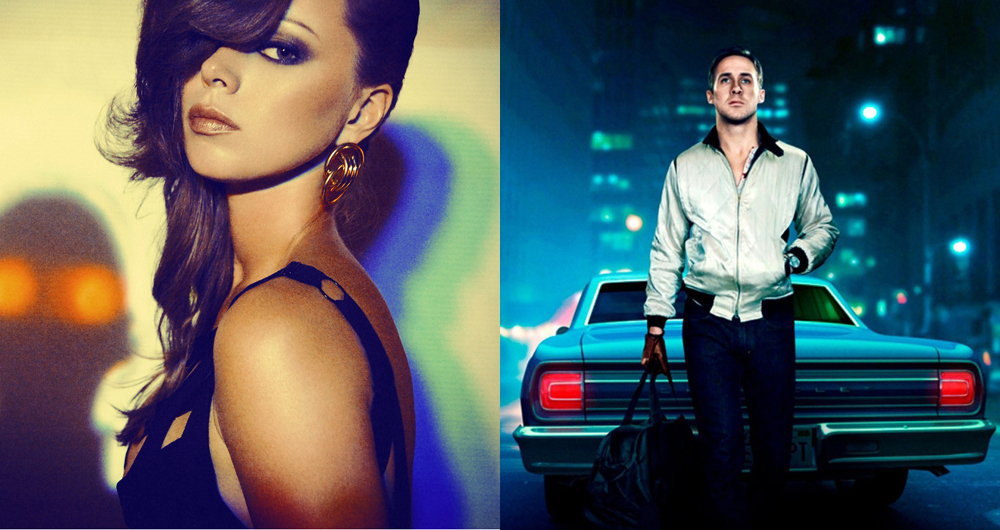 “Night Drive” (the 2007 album by Chromatics) or”Drive” (the 2011 film by Nicolas Winding Refn), it doesn’t really matter.  Both titles could perfectly capture either work; they go hand-in-hand.  “The Telephone Call,” “The Killing Spree,” “Tick of the Clock”?  Are they chapter titles or song titles?  I’ll be the first to admit that pairing these two together is fairly obvious, but that doesn’t ruin the fact that it’s a damn near perfect match.  Allow me to elaborate.

“Night Drive” saw Chromatics make the jump from post-punk to Eurodisco.  They haven’t looked back, and all is for the better.  Their sleek and narcotic brand of intimate, ’80s-inspired dance music creates an atmosphere of smoky, nocturnal spaces lit only by neon lights.  The album itself is structured around the concept of a woman going on a late-night drive, from the club to the home of her lover.  Cinematic enough for you?

A few years down the line… a little arthouse neo-noir by the name of “Drive” (starring America’s heartthrob, Ryan Gosling) arrives as a breath of fresh air.  If you like your action-thrillers muted, existential, violent, stylish, and romantic, look no further.  Imagine a blood-splattered fairy tale equally inspired by John Hughes and “Le Samouraï.”  If that sounds right up your alley, then chances are you are already a fan of Chromatics (or will soon be one).

It’s become common knowledge that Nicolas Winding Refn (inspired by “Night Drive”) wanted Chromatics mastermind Johnny Jewel to score the film.  At the last minute, however, the studio instead hired composer Cliff Martinez, who was inspired (without question) by the music of Jewel and his various musical projects.  They even managed to stick the Chromatics song “Tick of the Clock” into the soundtrack.  Even further, soon after the release of “Drive,” Jewel released an album, “Themes for an Imaginary Film,” with Nat Walker under the name Symmetry.  The album (which makes for a much more obvious pairing) is supposedly composed of work that went unused for the film.  But it all comes back to “Night Drive,” with its grainy and seductive style a grand influence on the aesthetics of “Drive.”  Obvious but essential.

The Climax: Moment to Moment

I tried to find a single scene that pairs greatly with a single song, but it was a futile attempt.  As I’ve made clear, almost every song on the album could play during any moment of the film and still feel appropriate.  The title track and the opening credits?  “The Killing Spree” and the now-infamous elevator scene?  It’s a fun little game to play.

Enter to win tickets to see Trio Da Kali at The Villa Victoria Center of the Arts (Newton, MA) on April 10th. END_OF_DOCUMENT_TOKEN_TO_BE_REPLACED

END_OF_DOCUMENT_TOKEN_TO_BE_REPLACED

Enter to win tickets to Rhye at The Paradise on February 28th. END_OF_DOCUMENT_TOKEN_TO_BE_REPLACED

Her new album has been pushed back, but we have Kimbra’s new single for you. END_OF_DOCUMENT_TOKEN_TO_BE_REPLACED

The folk duo returns with a new record this week. END_OF_DOCUMENT_TOKEN_TO_BE_REPLACED

Now that we’re done looking back at 2017, let’s look ahead at 2018. END_OF_DOCUMENT_TOKEN_TO_BE_REPLACED

Our first Song of the Week for 2018. END_OF_DOCUMENT_TOKEN_TO_BE_REPLACED

In a year when so many things were off, the music was right on. END_OF_DOCUMENT_TOKEN_TO_BE_REPLACED