Craigslist for the Big Screen: In Search of a Woman for Tickling 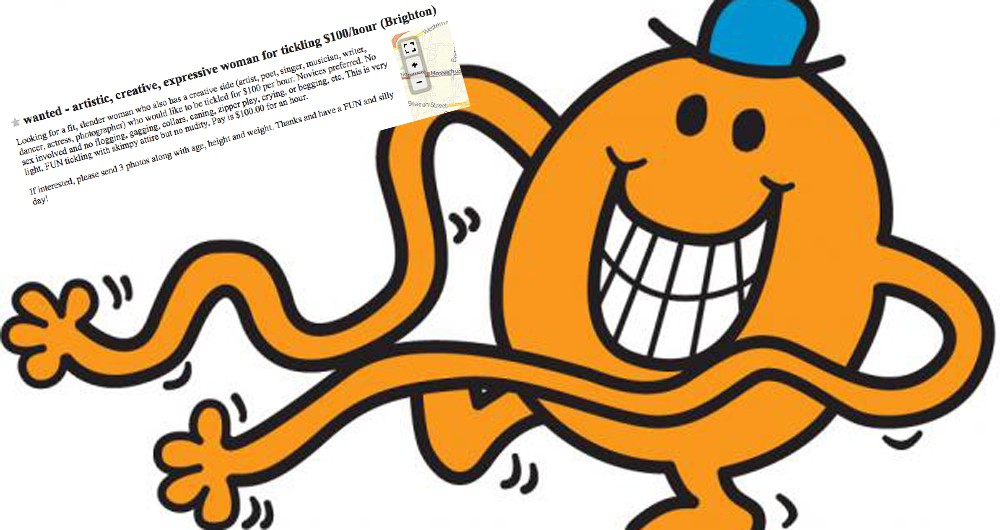 Craigslist for the Big Screen takes a local Craigslist post (from a Missed Connection to a Rant & Rave) and brings it to life, theoretically “adapting” it for the big screen. This week…

A doorbell rings OVER BLACK.

RICHARD (late 30s), a slender man with glasses and reptilian features, stands by the door and breathes deep.  After a moment, he opens the door of his apartment to find REBECCA (mid to late 20s), a gorgeous young woman with lush dark hair and piercing green eyes, leaning against the wall in the hallway outside.  She chews neon green gum and wears a leather overcoat with boots to match.

She blows a bubble with the gum.  She turns her head and appears to stare into his very being.  The bubble POPS.  Richard’s eyes run wild.

She pushes past him and steps into the apartment.  The apartment has promise but is quite messy, with clothes, papers, empty food cartons, etc. scattered across the floor.  From the contents of the rest of the apartment, it appears that he’s some kind of artist.

He lingers in the doorway with the door still open.

She drops her bag on a coffee table.

Well, what happened to Melissa?  You’re not the girl from the picture, the one I spoke to.

She wasn’t feeling too well.  So I told her that I’d take her place.

He shakes his head.

Yeah, well, that’s not what I agreed to.  We had everything worked out.  The clothing and everything.

He motions to the door.

I think you better leave.

She peers at him.  She takes the gum out of her mouth and sticks it on the underside of the coffee table.  She struts over to the door, slams it shut, and locks it.

Richard steps back with his hands up.

Hey, I don’t know what you think you’re doing.  I don’t want any trouble.  Just wanted some light fun.

Rebecca pulls a rag out of her pocket and holds it behind her back.  She then drops her coat to reveal a skimpy S&M outfit.

She slowly but precisely approaches him.  He stands still but appears to be shaking like an eager child.  She reaches him and smirks.  She strokes his arm.

Then SUDDENLY she pulls the rag out and holds it over his mouth.

Richard’s eyes desperately blink open.  It takes him a moment to realize that he’s tied up on the floor of his apartment in nothing but his underwear.  He writhes around.

Rebecca walks into his line of sight.  She holds her finger up to her lips.

What’re you doing?  What do you want with me?  I have the money in my wallet.  Just take it and go, please.

She walks over to her bag on the coffee table.

She pops open her bag and reaches her hand in.

I thought you wanted some tickling?

Isn’t that what your ad said?  You wanted some light, fun tickling?

It’s too late for that, Dick.

She brings the feather duster to his side.  He screams.

She smirks and tickles him with the feather duster.  His eyes bulge out of his head.  He continues to both shriek and laugh. Rebecca cackles.

Enter to win a pair of tickets to attend The Hess Collection Seminar and Dinner as part of Boston Wine Festival 2018 at the Boston Harbor Hotel on Wednesday, March 14th. END_OF_DOCUMENT_TOKEN_TO_BE_REPLACED

This should never have happened. END_OF_DOCUMENT_TOKEN_TO_BE_REPLACED

I spend far too much time on Twitter. Here’s a handful of posts from last year that I found to be entertaining on one level or another. Enjoy. END_OF_DOCUMENT_TOKEN_TO_BE_REPLACED

Apologies in advance for burying this in your skull forever. END_OF_DOCUMENT_TOKEN_TO_BE_REPLACED

If you like cover songs, you’re gonna love this. And by love, we mean probably hate. END_OF_DOCUMENT_TOKEN_TO_BE_REPLACED

Whether you celebrate the unofficial beginning of summer on Memorial Day weekend, or Meteorological Summer on June 1, or the Summer Solstice, make no mistake: summer is here. END_OF_DOCUMENT_TOKEN_TO_BE_REPLACED

The nu-metal mainstays have covered the unlikeliest of songs. END_OF_DOCUMENT_TOKEN_TO_BE_REPLACED