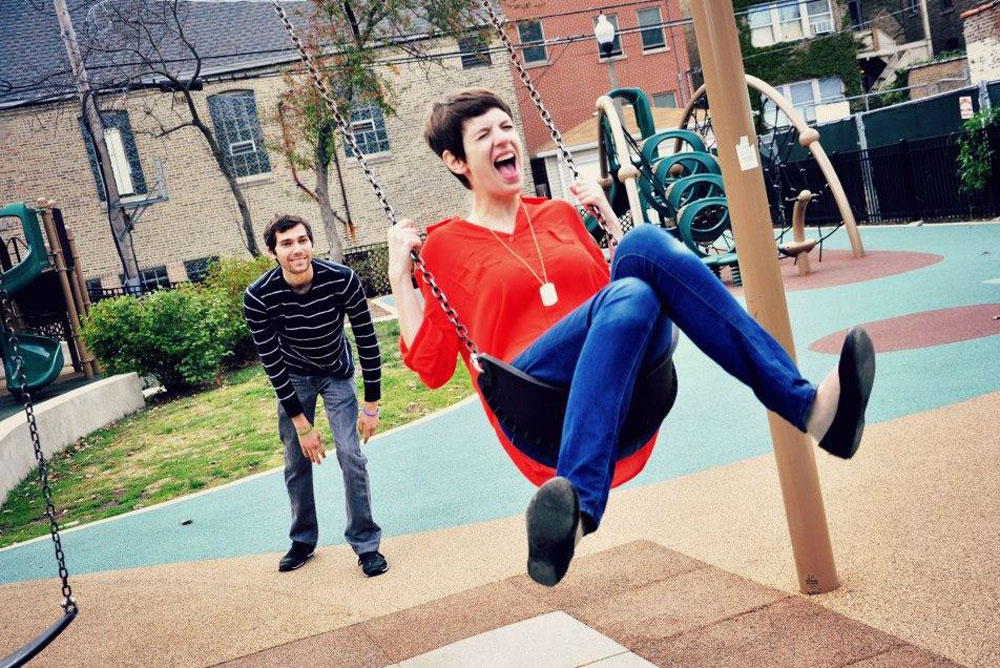 The worst thing you can do after a fight with your significant other is take to social media and post about it — unless you’re Alan Linic and Claire Meyer, creators of the Twitter account @WeFoughtAbout. The Chicago-based couple that tweets about the catalyst of their most recent argument has not only taken the Twitterverse by storm, they’ve somehow managed to improve their relationship while doing it.

Linic and Meyer created @WeFoughtAbout in August after realizing that many of their arguments stemmed from pretty innocent, if not comical, causes. “We were like, ‘If we posted about this, no one would believe us,’” Meyer says. The account recently went viral after it caught the attention of a friend’s sister who works for New York magazine.

Despite the couple’s sudden popularity — @WeFoughtAbout has grown from less than than 200 to nearly 20,000 followers in a matter of weeks — Linic and Meyer had no interest in Internet fame when they started the account.

“We just thought it would be funny,” Linic says. They were right. It is very, very funny.

That could be because Linic and Meyer are professionally witty people who perform at Second City and iO Chicago, some of Chicago’s most famous comedy clubs. Or it could be because it’s hard not to laugh when a couple reveals that their last fight began after one blamed the other for the death of Albus Dumbledore.

Claire blamed me for Dumbledore’s death.

Not all of their tweets are outlandish, though. Many of them — like “Alan went on a lovely sushi dinner on our 8 month-iversary. I was not invited,” and “Claire called our pet fish ‘baby’ in front of me” — make readers laugh simply because they’re relatable.

Both believe that using the account has made their already awesome relationship even better.

“Now I know that after the fight is done, once again we have to get on the same team — if we want to figure out how we’re going to post it on the site,” Linic says. “So that takes a lot of the fear out of the fight.”

Meyer agrees, adding, “It’s hard sometimes to find the catalyst [for the argument] because it’s not what you remember when you’re looking back on the fight. So when we do get to the bottom of that small thing that started it, a lot of times I’ll get a good laugh out of it. And nothing feels better after a fight than to be able to laugh about it.”

Linic and Meyer have a few rules for tweeting that ensure the account keeps them laughing. They only tweet about a fight once it has been resolved, even if that’s two or three days after the argument.

“We have to cool down before we post [to the account],” Meyer says. “[And] we both have to ‘OK’ something before it goes up.”

If they ever feel as if the account is harming their relationship, they say they will delete it immediately.

So, do Linic and Meyer think their Twitter method is something other couples should try? They have absolutely no idea.

“We’re not relationship experts or experts at anything,” Linic says, before deciding that he is, in fact, an expert at making spaghetti sauce. “I don’t know if I’d recommend a Twitter [account] or even writing things down [to other couples], but I’d definitely recommend being honest and [knowing] that just because a fight is over, that doesn’t mean it’s done… You’ve got to check in after the storm.”

According to the account’s Twitterfeed, Linic and Meyer have fought exactly 90 times since Aug. 30, prompting some of “the finer people of the Internet” as Meyer playfully calls them, to suggest they should just break up already. But the Internet haters don’t bother Linic or Meyer.

“In past relationships, each fight just seemed to build on each other. We would bring up old fights every single time and still try to resolve those amid another fight,” Meyer says. “Alan and I might fight a lot, but in-between that, there’s no hard feelings. We don’t let anything linger.”

A relationship with no hard feelings that uses fights to become stronger? Yeah, these guys are definitely on to something.

When he’s not running BostonTweet (or running the Boston Marathon), Tom O’Keefe is running around promoting Flutter. He was in studio with SumuApp co-founder Daniel Tewfik earlier today to talk about how you can win free rent for a year in Boston. END_OF_DOCUMENT_TOKEN_TO_BE_REPLACED

END_OF_DOCUMENT_TOKEN_TO_BE_REPLACED

Today, that briefly changed, as the hashtag #TheWorstPartofDepressionIs trended worldwide on Twitter, sparking a conversation on an issue many find difficult to discuss. END_OF_DOCUMENT_TOKEN_TO_BE_REPLACED

END_OF_DOCUMENT_TOKEN_TO_BE_REPLACED

All Harry Potter fans wait for the Hogwarts acceptance letter that they will never receive and dream of the house they want to join. You can hope to be part of Gryffindor all you want, but the choice belongs to the Sorting Hat. Now, instead of traveling the long journey to magic school, Muggles everywhere can consult a Twitter bot that will decide for you.
END_OF_DOCUMENT_TOKEN_TO_BE_REPLACED

Mindy Kaling’s older brother and Massachusetts native Vijay Chokalingam is preparing to release his first full-length book Almost Black, a chronicle detailing how he believes he got into medical school by claiming to be African American in the 1990s.  END_OF_DOCUMENT_TOKEN_TO_BE_REPLACED

While Cards Against Humanity is most famous for creating some of the most awkward moments at your most recent family get-together, they’re dipping their toes into social justice and outreach via a recently released new deck entitled the “Cards Against Humanity Science Ambassador Scholarship.” END_OF_DOCUMENT_TOKEN_TO_BE_REPLACED

A private plane pilot either had some serious jet fuel to kill or had a fraternity in tow yesterday in Florida, as some flight enthusiasts noticed an, ahem, unusual pattern on tracking site Flightradar24. END_OF_DOCUMENT_TOKEN_TO_BE_REPLACED